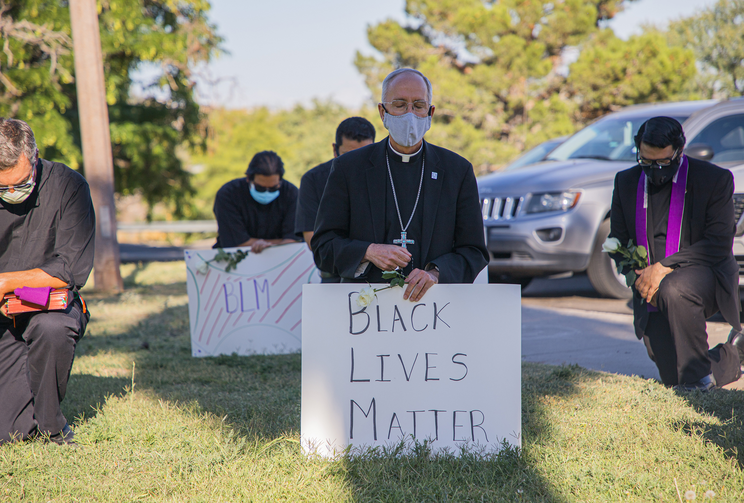 Bishop Mark J. Seitz of the Diocese of El Paso, Texas, kneels at El Paso's Memorial Park holding a Black Lives Matter sign June 1, 2020. Bishop Seitz and other clergy from the Diocese of El Paso, prayed and kneeled for eight minutes, the time George Floyd, an unarmed black man, was said to have spent under a police officer's knee before becoming unconscious and later dying May 25, 2020. (CNS photo/Fernie Ceniceros, courtesy Diocese of El Paso)

On the same day that Pope Francis prayed for George Floyd and offered support to the United States, he called the president of the U.S. Conference of Catholic Bishops, Archbishop José Gomez, as well as a Texas bishop who was recently photographed kneeling and holding a sign reading “Black Lives Matter.”

According to a press release from the U.S. Conference of Catholic Bishops, Pope Francis and Archbishop Gomez of Los Angeles spoke on Wednesday, June 3.

“Pope Francis expressed his gratitude to the bishops for their pastoral tone in the church’s response to the demonstrations across the country in their statements and actions since the death of George Floyd and assured the bishops of his continued prayers and closeness in the days and weeks ahead,” read a press release from the bishops’ conference.

Archbishop Gomez released a statement on May 31 calling Mr. Floyd’s killing “senseless and brutal, a sin that cries out to heaven for justice.”

“I expressed to the Holy Father that I felt it was imperative to show our solidarity to those who are suffering,” said Bishop Seitz, according to El Paso Matters

On Monday, Bishop Seitz and a group of priests dropped to one knee at the spot where protesters had clashed with police the night before while holding signs reading “Black Lives Matter” and “I want to breathe.” They prayed in silence for about eight minutes, the time Mr. Floyd spent under the officer’s knee before becoming unconscious. Details of the call between Bishop Seitz and the pope have not been made public.

“Dear brothers and sisters in the United States, I have witnessed with great concern the disturbing social unrest in your nation in these past days, following the tragic death of Mr. George Floyd,” the pope said during his general audience. “My friends, we cannot tolerate or turn a blind eye to racism and exclusion in any form and yet claim to defend the sacredness of every human life. At the same time, we have to recognize that ‘the violence of recent nights is self-destructive and self-defeating. Nothing is gained by violence and so much is lost.’”

We cannot tolerate or turn a blind eye to racism and exclusion in any form. At the same time, we have to recognize that violence is self-destructive and self-defeating. Nothing is gained by violence and so much is lost. Let us pray for reconciliation and peace.

Last October, Bishop Seitz released a pastoral letter, “Night Will Be No More,” in which he reflected on the August 2019 shooting in El Paso that left more than 20 people dead.

“If we are honest, racism is really about advancing, shoring up, and failing to oppose a system of white privilege and advantage based on skin color,” Bishop Seitz wrote. “When this system begins to shape our public choices, structure our common life together and becomes a tool of class, this is rightly called institutionalized racism.”

According to the press release from the U.S.C.C.B., the pope also offered prayers for the church in Saint Paul and Minneapolis. A Minneapolis police officer has been charged with Mr. Floyd’s murder and three other officers are also facing charges.

Archbishop Bernard Hebda, who heads the Archdiocese of Saint Paul and Minneapolis, joined other faith leaders in a silent walk to the spot where Mr. Floyd was killed, where they prayed in silence on June 2. The archbishop tweeted about his visit, writing, “While many faiths were represented, there was great unity as we prayed for justice and peace.” Archbishop Hebda tweeted on May 27 that he celebrated a Mass on behalf of Mr. George and his family.

Zac Davis contributed to this report.