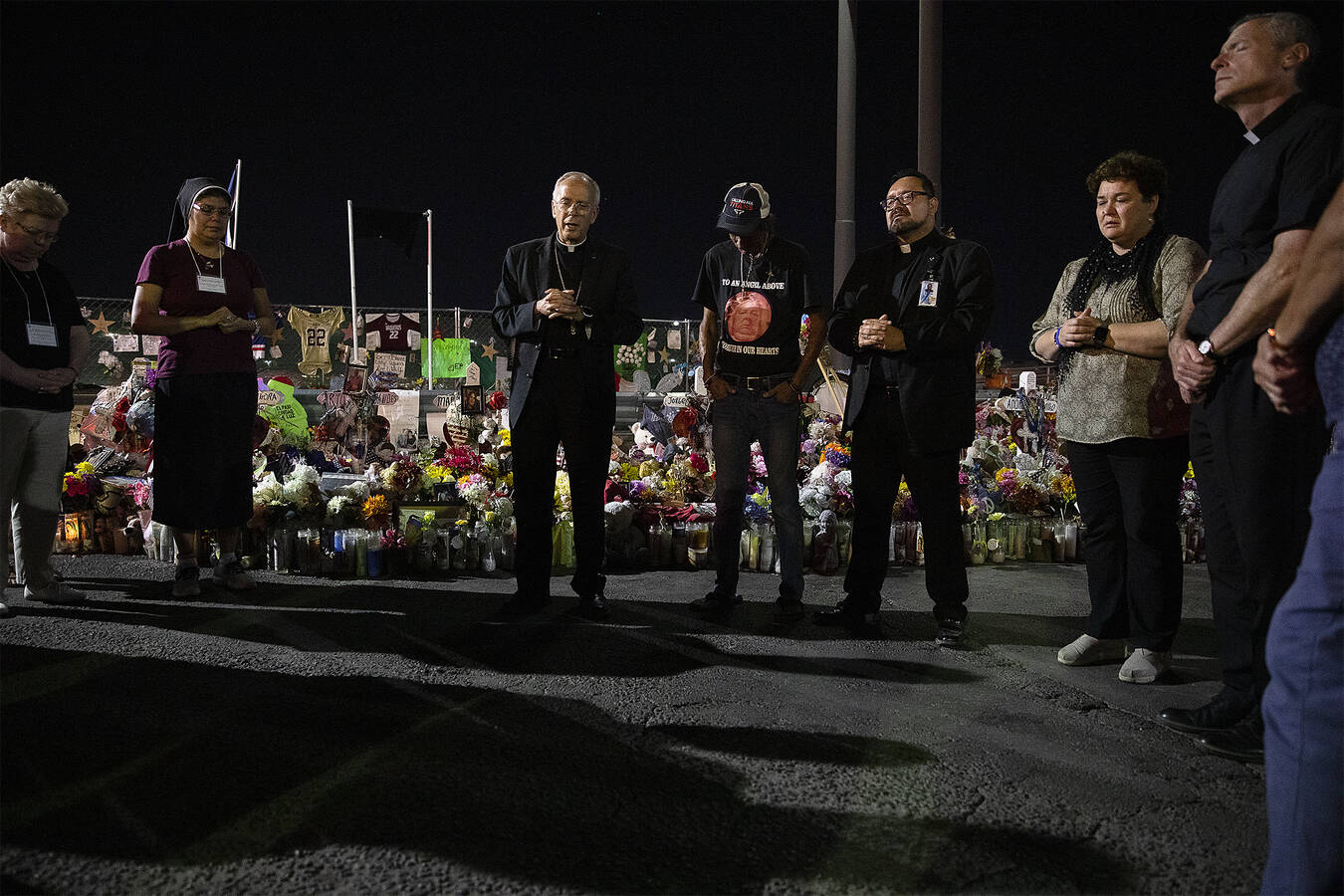 El Paso bishop: Latinos feel ‘they have targets on their backs’

The racism that is now a part of public life must be named and opposed, Bishop Mark J. Seitz of El Paso, Tex., said in a pastoral letter issued Oct. 13, on the “vigil of Indigenous People’s Day.”

“Sin unites people around fear and hate,” Bishop Seitz said. “Our highest elected officials have used the word ‘invasion’ and ‘killer’ over 500 times to refer to migrants, treated migrant children as pawns on a crass political chessboard, insinuated that judges and legislators of color are un-American and have made wall-building a core political project.”

The pastoral letter, “Night Will Be No More,” comes two months after the El Paso massacre that claimed 22 lives in an area Walmart. Bishop Seitz issued the letter at the concluding Mass of the Teach-In 2019: Journey for Justice, hosted by Hope Border Institute and the Latinx Catholic Leadership Coalition. The event gathered hundreds of Catholic organizers, labor leaders, theologians and activists.

“The matanza in El Paso focused our attention on the grave racism directed at Latinos today, which has reached a dangerous and feverous pitch,” Bishop Seitz wrote. “Latinos now tell me that for the first time in their lives they feel unsafe, even in El Paso. They feel that they have targets on their backs because of their skin color and language.”

The pastoral letter is the result of broad consultation across the diocese and the community. Bishop Seitz said it builds upon the writing of Bishop Edward Braxton of Belleville, Ill., and cites a wide range of contemporary sources throughout the letter, including poet Julia Esquivel, the Rev. Bryan Massingale, Archbishop Charles Chaput of Philadelphia, and recent popes.

The letter includes a historical summary of racism in North America, starting with the Spanish colonists who brought “exclusionary attitudes with them to the New World” in their encounters with indigenous communities. “They came from the experience of a nation newly united just as much around Catholicism as a nationalism built on the violent subordination and expulsion of Jews and Muslims,” Bishop Seitz said.

“Rooted in our history, many here can rightly say that we did not cross the border but that the border crossed us,” he wrote, noting how Texas was part of Mexico before 1835. That is the year the area became the Republic of Texas for a number of reasons, including “to protect the institution of Black slavery after its abolishment in 1836.”

"Rooted in our history, many here can rightly say that we did not cross the border but that the border crossed us."

The advent of the railroad brought a number of Chinese workers to the area, who were underpaid for their work, Bishop Seitz notes, adding that the Chinese Exclusion Act of 1882 was “one of the first examples of anti-immigrant legislation in U.S. history.”

Like the Chinese, Mexican farmworkers who took part in the Bracero program—which dealt with World War II labor shortages in the 1940s, 50s and 60s—were repressed after their work was completed, Bishop Seitz wrote. The U.S. government forcibly deported these farmworkers that had settled in the United States over decades of labor.

“The wall is a physical reminder of the failure of two friendly nations to resolve their internal and bi-national issues in [a] just and peaceful way,” Bishop Seitz said. “It is a destructive force on the environment. The wall kills families and children. There will be a day when after this wall has come crumbling down we will look back and remember the wall as a monument to hate.”

Bishop Seitz also acknowledged that the church has fallen short in standing against racism. “We perpetuated damaging notions of power and the desire to dominate and so contributed to the exploitation of peoples and the environment,” he wrote. “There are some who still feel estranged from the church on account of those actions and omissions which diminished the credibility of the Gospel.”

“The wall is a physical reminder of the failure of two friendly nations to resolve their internal and bi-national issues in [a] just and peaceful way.”

Yet Bishop Seitz finds hope in the figure of Our Lady of Guadalupe, with whom the border community identifies. “Against the dehumanization, as once she said to San Juan Diego, who represented a people dehumanized and disenfranchised, Guadalupe says to our people, ‘you count,’ tu vales,” he wrote.

“Only a woman such as this young, brown, mestiza empress, born on the edges of empire and who revealed herself anew on the edges of empire, could have convinced our people of the nearness and tenderness of God,” he wrote. “With her knee raised in dance, Guadalupe invites us to leave behind fear and join her in the work of advancing justice in America with joy.”

Bishop Braxton: How to come together in response to the gun violence epidemic
Edward K. Braxton

Our Lady of Guadalupe challenges the church to defend human rights and restore dignity, Bishop Seitz wrote. “What racism has divided, with the help of God, we can work to restore,” he said.

Restoring that dignity includes halting the deportation “of all those who are not a danger to our communities,” the bishop wrote, pleading with government leaders to “stop the separation of families.” And it includes sparing the life of Patrick Crusius, the man accused of killing the 22 who died in the El Paso matanza.

“If there is anyone who feels so alone, so isolated and so tortured that you feel your only way out is to succumb to the darkness of racism and violence and pick up a gun, I say to you today: there is a place for you in our community and in our church,” Bishop Seitz wrote. “Lay aside your weapons of hate. Put away your fear. Here there is a teacher, a sister, a deacon, a priest, a counselor… a bishop, waiting to welcome you home and greet you. Tu vales.”

Correction Oct. 15, 2019:
In a previous version of this story, the Rev. Bryan Massingale was misidentified as a Jesuit. He is a priest in the Archdiocese of Milwaukee, Wisc.

Get used to it, man up, face the fact that being a Christian is counter-cultural and a rebuke to all non-believers. Of course they will hate you and oppose you and be a threat to you - who told you life was supposed to be easy and safe?

All groups have other groups who hate them, that is reality, and your bishops should be telling you to have a spine, walk in courage, refuse to worship fear, grow up, join the spiritual war and make yourselves useful.

It is not just some Latinos who feel like they have a target on their back. Some Jews, Muslims, Blacks, and homosexuals feel this way because all have been targets of hate to one degree or another in the last decade.
The bishop recognizes that throughout the history of North America there have been periods of anti-immigrant attitudes sometimes resulting not only in exclusionary practices but outright violence. The country was founded by and for white Northern European Protestant men. Each successive wave of immigrants be they Irish, Italian, Eastern European, middle eastern, or Asian have been exposed to many decades of prejudice and discrimination. The same holds true for the African slaves and their offspring, women in general (voting, owning property, etc) and of course the American Indian..
I think viewing the wall as a symbol of hate is too strong. I agree the perceived need for a wall is due In part to racism but it is also to a failure on the part of the United States and others to address the conditions prompting many to flee their homelands. The incorrect perception on the part of some Americans is that a majority of those seeking entry will be an undue burden when for the most part, just the opposite is true. Yes, we need a screening process to catch the “bad eggs.” We can’t just have open borders. We need a process.
We need to come to a mutti-faceted effort to be Christ-like in welcoming those facing tyranny and extreme hardship in their homelands. We also need to establish a system to not only control illegal migration but to swiftly handle legitimate requests for asylum.

Bishop Seitz’s letter would have much more impact had it been signed by every Bishop in the USA. I never read about it in my diocesan newspaper. Unfortunately, protecting their economic well-being seems to be more the interest of most of the nation’s Bishops than most moral issues or preaching the Gospels. Most engage in tepid moral clichés when discussing the history that Seitz records. I would once like to hear from a pulpit, any pulpit, before I die that racism of any kind is a mortal sin. I would like to hear from some Bishop the same aggressive language as was used by Bishop John Hughes against the Protestant Know-Nothings. Sadly, our Catholic hierarchy fall far short of the mark!