Pro-lifers betrayed their cause by treating Norma McCorvey, ‘Jane Roe,’ as less than fully human 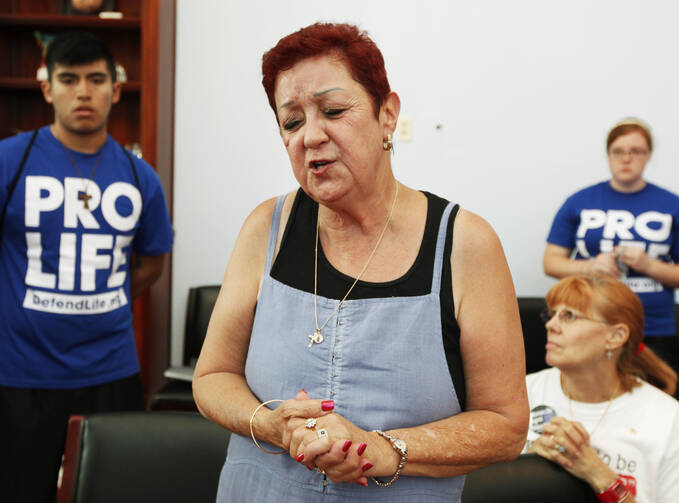 What do we really know about Norma McCorvey? A new documentary premiering Friday about the pro-life celebrity includes some bombshells from what she called her “deathbed confession”: that her pro-life convictions and possibly even her conversion to Christianity were all an act, performed for money.

“I was the big fish. I think it was a mutual thing. I took their money and they’d put me out in front of the cameras and tell me what to say,” Ms. McCorvey said in previews of “AKA Jane Roe.”

Ms. McCorvey, the anonymous plaintiff “Jane Roe” of the 1973 Supreme Court case Roe v. Wade, was initially a pro-choice activist, but after her baptism in 1995, she became a celebrity for the pro-life cause. According to the documentary, she received over $400,000 in “benevolent gifts” from various pro-life organizations. Does her history prove that she only pretended to be pro-life because of the money and fame it brought? Or does it prove that she was only pretending to be pro-choice because that, too, brought her attention and cash?

I suspect the answer is: both, or neither.

Ms. McCorvey is the classic unreliable narrator, and those who have followed her story are not surprised that this new narrative is emerging three years after her death.

“It was all an act. I did it well, too. I am a good actress. Of course, I’m not acting now,” Ms. McCorvey said in the documentary, apparently without irony.

Ms. McCorvey is the classic unreliable narrator, and those who have followed her story are not surprised that this new narrative is emerging three years after her death. She said she was pro-life, but she supported first-trimester abortions; she said she renounced her L.G.B.T. lifestyle but lived with a female companion for decades. She gave varying accounts of how she came to be pregnant with the baby whose abortion she tried and failed to procure, claiming at various times that she was raped, then that she had lied about being raped. She wrote a book called Won By Love, but she was often harsh and aggressive toward her own supporters. Her behavior was erratic, her speech often rambling.

The Catholic author and journalist Dawn Eden Goldstein, who says she met Ms. McCorvey in 2007 at a “40 Days for Life” dinner, recently shared a note she sent to their mutual booking agent, urging him to find her a “minder” who could protect her from fans who plied her with drinks even after she told them she was an alcoholic.

And she was used, consistently, tragically, all her life. She was abused, perhaps raped, uprooted, deceived and manipulated, as well as wined, dined, feted and mythologized by both sides. The fact that she became immortalized by the anonymous name “Jane Roe” is tragically apt. Here is someone who was never allowed to be herself.

Ms. McCorvey always struck me as someone who was about as consistent as most people, which is not very consistent. She seems to have been about as sincere a Christian as most Christians, which is to say not very sincere. She was as immune to impure motives as most people are, which is hardly at all. She had a much harder life than most people; she was much more famous than most people. She was as well suited to be in the spotlight as most people are, which is to say, not at all. And yet the spotlight was where she lived and where she continues to dwell even after her death. She was used and abused as a child, and she continues to be used and abused by both pro-lifers and pro-choicers who want her to be a statement, a symbol, a weapon against the other side. It is a rotten thing to see.

I am not trashing Ms. McCorvey. Just the opposite: I am mourning that this woman continues to be manipulated and maltreated even after her death.

I am not trashing Norma McCorvey. Just the opposite: I am mourning that this woman continues to be manipulated and maltreated even after her death.

The Rev. Frank Pavone of Priests for Life hotly defended her pro-life sincerity on Twitter, saying that he received her into the church, was her spiritual guide for 22 years, spoke with her the day she died and conducted her funeral. Father Pavone, who gained notoriety when he used a fetal corpse as a prop for a pro-Trump video, seems unaware what a self-own his defense of Ms. McCorvey is. He seems to believe he is defending the integrity of the pro-life movement, but instead he is demonstrating just how willing some pro-lifers are to use people as objects. Pro-choicers are predictably jubilant over the purported exposé in the documentary. But pro-lifers ought to know better than to use her name as a weapon. She is not a weapon. She is human.

She is, in a sense, the perfect figurehead for the shallow end of the American pro-life movement, if only by horrible example, because her life illustrates what the pro-life movement says it teaches: that it is always wrong to treat a human being as an object. I once heard a cynical Catholic quip that pro-choicers drag their kids to rallies to prove they were planned and wanted, and pro-lifers drag their kids to rallies to prove they had not killed them. Poor Ms. McCorvey appears to have had the misfortune of being dragged around by both sides. It is hard to blame her for giving in to the urge to do a little dragging back.

What we really know about Norma McCorvey? We know that she was human. Any pro-lifer who finds that fact shocking should be in another line of work.

It was Twitter hyperbole to say there should be no pro-life celebrities. The pro-life movement, like any other movement, needs big names and spokespersons. We need people who rise to the top of the headlines because they are magnetic, single-minded, well-spoken and dedicated to the cause. Unborn children cannot speak for themselves; they need someone who has a microphone and knows how to use it.

My mother was a pro-life activist. She showed me if you’re wounding people, you are doing it wrong
Simcha Fisher

But the bedrock idea on which the pro-life movement stands is that human beings are precious simply because they are human beings, not because of what they can accomplish or what can be accomplished by using them. It is true of unborn babies, and it is true of celebrities, too. There should never be someone so useful that we cannot treat them as a person—either with kindness when they need help or with accountability when they have gone astray. Every human is a real person, even if they are very good or very bad or very useful. A person is a person, no matter how famous.

I suspect we will never get a definitive answer on how sincere Ms. McCorvey’s conversion and pro-life convictions were. She may not have known, herself, how sincere she was. She should never have been put in a position where her sincerity and consistency were so vital to the cause.

What we really know about Norma McCorvey? We know that she was human. Any pro-lifer who finds that fact shocking should be in another line of work.