During plague, Catholic Church called on saints for help, healing

During plague, Catholic Church called on saints for help, healing 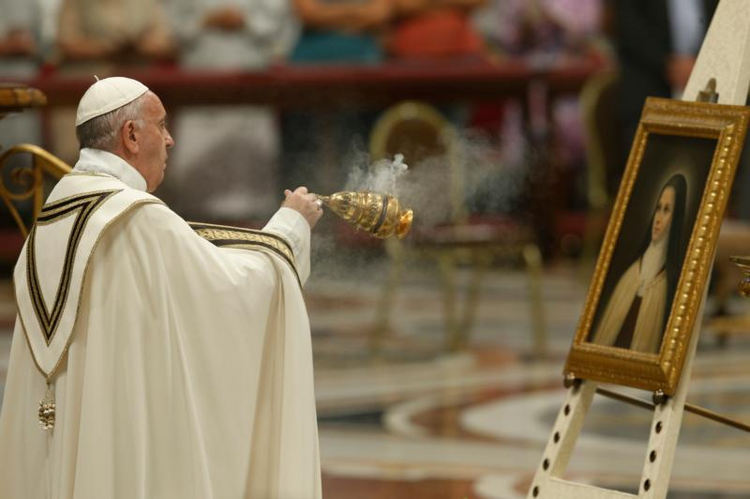 Pope Francis uses incense to venerate an image of St. Therese of Lisieux during a prayer vigil in St. Peter's Basilica at the Vatican Oct. 1, 2019. Catholics often pray to the saint, popularly known as "The Little Flower of Jesus," for intercession in periods of sickness and difficult times, because St. Therese suffered great illness at a young age. (CNS photo/Paul Haring)

WASHINGTON (CNS) -- The Catholic Church has had a long tradition of calling on saints and praying for their intercession in sickness and difficult times.

This plea for saintly help for protection from disease and healing was particularly evident when the bubonic plague, or Black Death, spread throughout Europe in the 14th century killing one-third of the population.

In Florence, Italy, the bishop had an altar built in honor of St. Sebastian as a means to stop the Black Death and after the plague was over, he built a church dedicated to the saint in thanksgiving for his intercession.

Artwork depicting the plague shows that St. Sebastian seemed to be the go-to saint at the time.

He was martyred around the year 288 during the reign of the Roman emperor Diocletian. He was shot by arrows, which is how he is portrayed in paintings where the arrows are also said to be symbolic of the arrows of the Black Death.

But the special appeal of St. Sebastian has a lot of layers. He is said to have converted to Christianity after seeing the bravery of Christian martyrs and he then drew others to become Christian, including a Roman officer who was said to be have been cured of a plague at his conversion.

This particular action caught the attention of Diocletian, who sentenced St. Sebastian to death by arrows. But the saint, according to tradition, is said to have survived the arrows and returned to Diocletian to have strong words with him, which caused the emperor to again, and successfully this time, have St. Sebastian executed.

The saint's prayers for the Roman soldier and the soldier's cure made him associated with the cure of plagues, especially in Italy.

St. Roch also is portrayed in paintings of the plague, but he is shown among victims, often praying to Mary, since he too was a victim of the disease. The same holds true for St. Aloysius Gonzaga, who contracted a different plague, which hit Rome in 1591, and died of it after catching the disease while caring for victims.

There also is a whole group of saints who were called on for prayers during the plague, starting in 1348 in Munich. This group goes by the name the Fourteen Holy Helpers.

The group of 14 -- each with individual feast days and initially one day for the whole group until 1969 -- is honored in a German chapel that is a pilgrimage site. There also are churches in Italy, Austria, Hungary and other European countries named after these 14 and one parish in West Seneca, New York, in the Diocese of Buffalo.

Twelve of this specialized group are martyrs and three are women. Perhaps most known now among the group is St. Blaise, patron saint of throats, who is invoked each Feb. 3 on his feast day, for blessing of the throats.

The Rhythms of the Saints
John J. McLain

Today, Fourteen Holy Helpers Parish in New York, looks, on its website, like most U.S. parishes. There are descriptions of usual activities and events in a nonpandemic time on the site, https://fourteenholyhelpers.org, and at the top of the home page there is an announcement of online Masses, a plea for online giving to the parish and an urge to support local businesses. The full monthly calendar has the word canceled after every previously scheduled church event.

"This period of time when we have been required to cancel public Masses and all parish events and services should certainly be considered one of the most difficult periods in the 156-year history of our parish. Even through this time of decreased activity, a number of expenses continue to be incurred ... utilities, insurance, maintenance, and payrolls to name a few," the parish announcement says.

During this current time of coronavirus pandemic, some have called on St. Corona as a possible patron, but the connection seems to be in name only. A Catholic News Service article about her said little is known about the young woman who was killed for her Christian faith, presumably in the second century A.D.

St. Corona also is not the namesake for the virus. The Latin word "corona" means "crown," an indication that the young saint had achieved the "crown of eternal life" because of the steadfastness of her faith. The connection with the coronaviruses, named because of their crown-like structure, is just a coincidence.

Over the centuries, St. Corona was often prayed to by people seeking her help in times of trouble, be it heavy storms or livestock diseases.

People believed she had a positive influence regarding money matters since "coronae" (crowns) was the name given to coins. As a result, treasure-hunters often invoked her name and in light of how COVID-19 has triggered an economic crisis, she could be called on again.

In the listing of church saints there are at least 100 saints that can be invoked for protection or healing of nearly every possible ailment from eye troubles, headaches and toothaches to cancer, rabies and epilepsy.

When asked about saints that would be good intercessors during this time of the coronavirus pandemic, Jesuit Father James Martin, editor at large at America magazine and author of the 2006 book, "My Life With the Saints," told CNS that three saints he mentions in his book would be good to start with.

At the top of his list is St. Aloysius Gonzaga, the Jesuit saint who died as a result of working with victims of a plague in Rome. The second is St. Therese of Lisieux, "who also had to deal with illness at a young age."

Last on his shortlist is St. Bernadette Soubirous, the visionary of Lourdes, France, who contracted cholera in the epidemic of 1854 and also suffered from asthma and other ailments throughout her life. She is invoked as a patron for the millions who go to Lourdes each year seeking healing.

Father Martin, on a personal note, said that when he was undergoing treatment for a benign tumor and radiation last summer, his own prayers were to St. Bernadette and Our Lady of Lourdes.