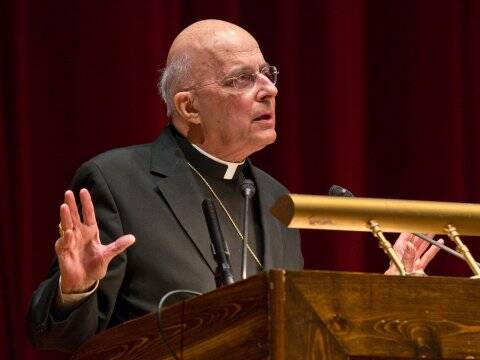 Cardinal Francis George, O.M.I., speaking at the Lumen Christi Institute. Throughout his time as Archbishop of Chicago, Cardinal George was a strong supporter of the Institute. (Photo courtesy of Lumen Christi).

Central to the vision of Cardinal Francis George, O.M.I., who blessed the founding of the Lumen Christi Institute in 1997, was the notion of Communio, communion. On April 17, we observe the fifth anniversary of his death. The idea of communion was a common thread through the three books he published with the assistance of the Lumen Christi Institute: The Difference God Makes, God in Actionand A Godly Humanism. To put his thought into one phrase: We come to know and to be ourselves in relationship to others and to God.

All societies on earth today face the threat of the novel coronavirus known as Covid-19. Nothing more need be said: We consume the same news, and many of us—virtually all of us—have had our lives disrupted, our economies paralyzed and, most serious of all, public worship canceled.

Our lives, our selves, are undone. Today, our core relationships are mediated by telephone or the internet. The exception is our relationship to God in our private prayer, as our priests offer—behind locked doors—the Eucharist, which Cardinal George described as “a perpetuation of the Incarnation,” the “great sacrament of unity.”

Today, when Masses are celebrated without a congregation, we are encouraged to make acts of spiritual communion. By faith, we know that spiritual communion in the Eucharist is more real than the innovative technological forms of communication we employ to stay in touch with friends, family and coworkers. Cardinal George would remind us that the communion we have both with God and the friendship we enjoy with the saints are also more real.

The Virtual and the Real

Last month we remembered St. Óscar Romero, the former archbishop of San Salvador, who was martyred 40 years ago. In his fidelity to Christ, he challenged acts of violence against the innocent and the injustice of a corrupt social order. He sacrificed his life as a witness to the love of God in Christ and in solidarity with the poor. Cardinal George would recognize the importance of solidarity with the poor in Christian discipleship; he had planned in his retirement to write a memoir that would reflect on his experience of being with the poor as he traveled worldwide to support communities of missionaries as the vicar general of the Oblates of Mary Immaculate.

As a survivor of an earlier polio epidemic, Cardinal George would also be able to offer a word about the threat of disease and the achievements of science and medicine, which saved his life and which saved many others from the threat of infantile paralysis.

"The First Vatican Council taught that faith is not irrational. Ironically, at the end of the twentieth century, the Catholic Church is saying that faith must rescue reason from its own self-inflicted wound of skepticism."

We have long turned to scientists as authorities to guide us in practices to stem diseases and trusted scientists to deliver us from pestilences with treatments and hoped-for vaccines . From the Enlightenment into the 19th century, there was a tendency to think that science and technology would provide all the answers. After the Manhattan Project and the dropping of the atomic bombs on Japanese cities (75 years ago this coming August), science and technology were seen more ambiguously. Today, we even see attempts to delegitimize science or to adapt it to fit one’s ideology.

In his book The Difference God Makes, Cardinal George addressed the issue in another way:

We live with a crisis of relationships, and also with a crisis of intelligence. Pope John Paul II addressed this latter crisis in Fides et Ratio, explaining that the twin crises of atheism and moral relativism stem from a lack of confidence in human reason’s ability to arrive at the truth. It is not that we dismiss faith because we are so sure we have the truth; it is rather that we dismiss faith as a source of truth because nothing can give us the full truth. There is no absolute truth. In this view, even science, a construct that enables us to work in a pragmatic way to manipulate nature to our own purposes, is not true in a necessary way.

The human intellect has lost confidence in its ability to know unchangeable truth. In the face of triumphant human reason at the end of the nineteenth century, the First Vatican Council taught that faith is not irrational. Ironically, at the end of the twentieth century, the Church is saying that faith must rescue reason from its own self-inflicted wound of skepticism.

After drafting the prospectus for the Lumen Christi Institute, we met with Archbishop Francis George in June 1997, not long after his appointment to head the Catholic Church in Chicago on April 7, 1997. That began a working relationship that involved many highlights: his participation in events at the University of Chicago, conferences with research economists and bishops beginning in the economic crisis in March 2009, a trip to the 60th anniversary of D-Day in Normandy with a Mass at the American cemetery concelebrated by Cardinal Joseph Ratzinger, and the three books, the last of which he finished revising two weeks before his death.

The Role of an Archbishop: An Interview with Cardinal Francis George
Mary Ann Walsh

In that last book, the cardinal acknowledged me as “a friendly critic and persistent mover” referring to both my literary assistance and my tendency to say things to provoke a lively argument. I remember mentioning the one real division between us to the Rev. Willard Jabusch—a native of Beverly on Chicago’s far south side: “Sure, Cardinal George is very supportive of our work. But can we really trust him? Remember, he’s from the North Side!”

The first time we hosted Cardinal George at the University of Chicago was for a symposium on the “The Catholic Scholar and the Secular University,” organized with the Catholic Common Ground Initiative, founded by Cardinal Joseph Bernardin. But it was Cardinal George’s participation in our symposium on the encyclical “Fides et Ratio”that revealed the cardinal’s gifts as a thinker. He demonstrated a remarkable ability to think on his feet. Cardinal George was able to briefly state the crux of the argument of the encyclical, relate it to the situation of philosophy and American culture today and respond to the issues raised by earlier speakers.

Another passage from The Difference God Makes articulates his point that, in making that case for Catholic belief, one needs both faith and reason.

Doubt that human reason can understand the truth of things as they are is the result of a rationalism that separates human thought from any relationship to the data of God’s self-revelation. In such a cultural milieu, the new apologetics must therefore be grounded in a philosophy that grants the sciences their rightful autonomy but not a hegemony; it must make use of a philosophy that is open to contemporary concepts, especially those that promote an appreciation for human subjectivity and for the centrality of human freedom in our experience. In an effective apologetics, reason finds itself strengthened in its dialogue with faith, and vice versa.

This fall, John Haas—former president of The National Catholic Bioethics Center—mentioned to me a comment made to him six years ago by Pope Emeritus Benedict XVI in a conversation in his retirement residence at the Vatican. Pope Benedict said that Cardinal George was “one of the most brilliant men he had ever known and that it was a blessing to have known him.”

Many of us would say the same thing. Just remember that he was from the North Side. 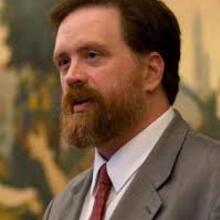 Thomas Levergood is executive director and a co-founder of the Lumen Christi Institute at the University of Chicago.