An Italian I.C.U. doctor describes the desperate fight against Covid-19 in Lombardy 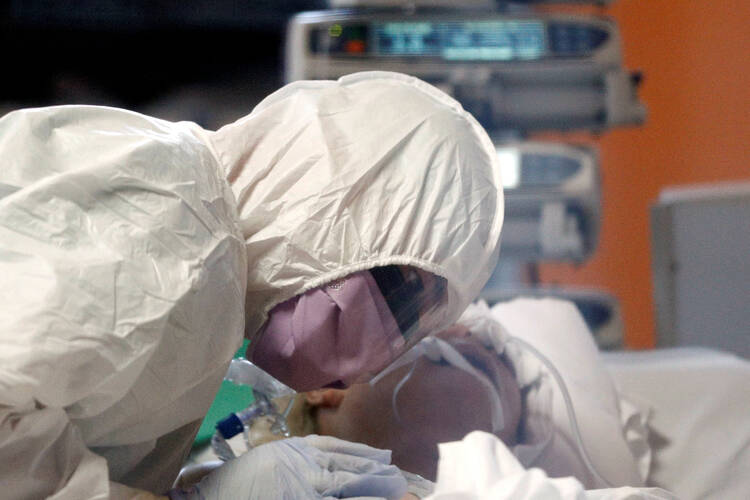 A medical worker in a protective suit treats a coronavirus patient in an intensive care unit at the Casalpalocco hospital in Rome March 24, 2020. (CNS photo/Guglielmo Mangiapane, Reuters)

Italy has surpassed all other countries in the world in terms of deaths linked to the coronavirus pandemic with a total of 12,428 by March 31. It is the country that so far has suffered most from the virus, an “invisible enemy.” With a total of 105,792 confirmed cases of infection, it has had more cases than China and is second only to the 165,874 reported in the United States, but its population of 60 million is significantly smaller than these other nations unfortunate enough to be at the top of the Covid-19 list.

While these are the official figures provided each evening by the Italian Civil Protection Agency, researchers at the National Observatory on Health at the Catholic University of Rome believe the true numbers of Covid-19 victims could be much higher, with perhaps as many as 530,000 infected and 2,800 more deaths at home that have not been recorded as Covid-19 fatalities.

The virus was first detected in northern Italy on Feb. 21, though we now know that it was already present in Italy by late December or early January. Since then the coronavirus has spread through much of the north, Italy’s economic heartland, from the Piedmont to the Veneto region. But it has struck hardest in the prosperous region of Lombardy, home to some 10 million people, and especially the cities of Bergamo and Brescia. By March 30, more than half of all Italian deaths and just less than half of the cases of infection were found in Lombardy—6,818 deaths and 42,161 Covid-19 cases.

The health care structures in northern Italy, especially Lombardy, “were in great difficulty right from the beginning,” Dr. Renata Ghelardi told America in an exclusive interview from the Vizzolo Predabissi Hospital, where she works. It is one of three public hospitals in the province of Milan. Dr. Ghelardi is the head of its diabetes department but was called to the hospital’s frontline to care for the wave of patients with Covid-19.

“The situation continues to be very, very difficult in the hospitals of northern Italy because of the lack of intensive care units,” Dr. Renata Ghelardi said, reporting that the hospital system in Bergamo “is in a state of collapse.”

“The situation continues to be very, very difficult in the hospitals of northern Italy because of the lack of intensive care units,” she said, reporting that the hospital system in Bergamo “is in a state of collapse.” In the hospital where she works, she recalled, “We had four intensive care units before the emergency, but we had to increase the number to 17 and to achieve that we had to close the operating theaters and reduce other sectors, including the cardiological unit.”

One of Italy’s top specialists in intensive therapy, Dr. Luciano Gattinoni, told Italy’s La Stampa, “If the virus attacks the lungs, it is lethal, and without intensive therapy it cannot be cured.”

Dr. Ghelardi agrees on the vital importance of the I.C.U.s in this battle, but she said, “It’s not a simple thing to open a new I.C.U.; you need extra personnel, protective clothing, equipment, including ventilators, and other resources.” Before the virus hit, she said, “When a patient was put in the I.C.U., they stayed for two to three days, but this is not the case with those who enter with severe coronavirus symptoms. They have to be intubated, and each patient can remain for up to three weeks.”

She recalled that in her hospital “so many arrived all at once due to this emergency, we could not cope with the influx. Right now, we have no beds free in I.C.U., so we’ve had to send patients to I.C.U. units in other regions of Italy, and even to Germany, which offered assistance.”

She admits life is hard on the frontline, but she said “all the staff” in her hospital “are working with immense generosity. As doctors, we work eight hours per day in normal times, and in emergencies up to 12. In this emergency, however, many doctors work 16 hours a day; they don’t stop, and some even sleep in the hospital instead of going home.”

But this leads to another problem. “When you are under pressure like this,” she said, “you are not able to give the best care to the patient; you just do what you can.”

“When you are under pressure like this,” she said, “you are not able to give the best care to the patient; you just do what you can.”

On March 9, the Italian government decreed a nationwide lockdown, but the Lombardy region had done so even before that. She applauded this measure. “It is so important,” Dr. Ghelardi said. “It enforces the isolation that prevents the spread of the virus and gives hospitals the chance to cope.

“Many people did not understand the need for the lockdown at first,” she said, “but now they see it is essential; they realize that the only way to prevent the spread of the virus is to stay at home.

“The older people, especially those over 70, got frightened and now understand this well, and so fewer [of them] are having to be hospitalized,” Dr. Ghelardi said. Now “we have mostly young people, aged between 30 to 50, in the I.C.U.s. They occupy two-thirds of the beds. They thought, wrongly, that only the elderly could suffer contagion, but the fact is nobody has the antibodies [to Covid-19], and each person who has the virus—even if without symptoms—is like a kind of atomic bomb for the others to whom they could transmit the virus.”

Around 80 percent of those who have died in Italy during the pandemic were elderly people, according to Dr. Ghelardi. The overwhelming majority of them had other health problems, but the virus dealt the death blow. Several medical specialists on the panel of the Civil Protection Agency’s evening press conferences estimated that around 10 percent of the deaths are due to the virus alone.

Reflecting on her traumatic weeks of service, Dr. Ghelardi, a mother of three, said, “We were the first country that is not authoritarian and had not had the previous experience of fighting SARS to face Covid-19, as China had.

“We had to learn from day-to-day how to combat it and what was needed to prevent its spread. We didn’t have the necessary protection—masks, gowns, gloves and so on—and we didn’t at that stage understand how contagious and aggressive this virus was and the speed with which it moves. Several colleagues died, a great many were infected; some are still in the hospital.”

“We had to learn from day-to-day how to combat it and what was needed to prevent its spread. We didn’t have the necessary protection—masks, gowns, gloves. Several colleagues died, a great many were infected; some are still in the hospital.”

A report published by Italian medical associations in the British Medical Journal revealed that by March 22, a total of 4,824 health care workers in Italy were stricken by Covid-19 (9 percent of total cases then) and 24 doctors had died. By March 30, the number of doctors who had died reached 63 and the number of health care workers infected was almost 9,000, including around 4,000 nurses.

Despite the lack of preparation and protective equipment, Dr. Ghelardi said, “We were brave. We blazed the trail and are now better protected and prepared, though the situation is still very, very difficult. We are not over the hill yet.”

She noted that “other countries in Europe and the United States had two to three weeks to prepare for it and should have benefited from Italy’s experience, but amazingly some didn’t; they seemed to consider themselves immune and are now paying the price.”

Dr. Ghelardi believes “there’s a lesson to be learned from all this: One must prepare for such epidemics. We were not prepared and so were hit so badly.” She recalled that in recent years, the regional government in Lombardy had introduced big economic cuts in their health care systems, with a consequent reduction in hospital beds, medical personnel and equipment.

“These cuts also caused internal tensions among staff in hospitals,” Dr. Ghelardi said, “as they competed for the limited resources. But I’m happy to say that in our moment of greatest need—with the onslaught of the coronavirus epidemic—there was a great internal reconciliation or peacemaking; the fight against the coronavirus united us all.

“Everyone wanted to do something to help,” she said. “I think we’ll take this good memory in our hearts for the future; it will give us strength in our working together.”