Coronavirus is devastating the Italian economy. 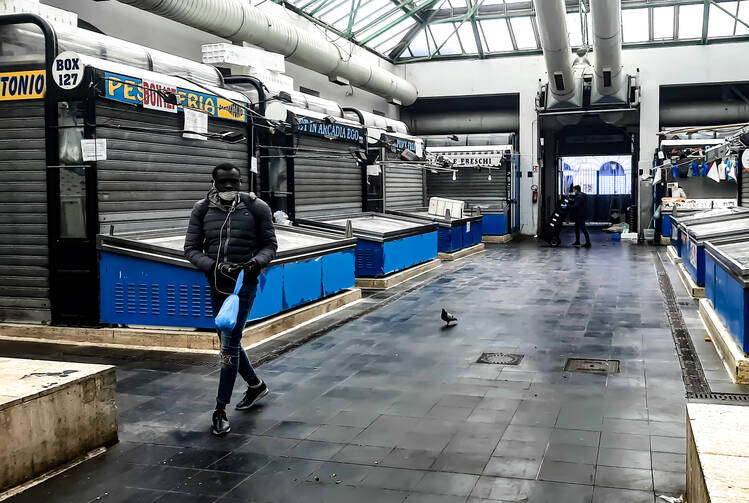 A man walks past the shuttered stalls of fishmongers at Rome's Piazza Vittorio market on March 25.  (CNS photo/Nancy McNally)

Coronavirus is causing enormous upheaval in Italy’s economy, the European Union’s third largest. The crisis is revealing the terrible plight of millions of men and women now in dire financial straits because they have had to stop working after the lockdown imposed by the government to combat the pandemic and protect lives.

The country’s economy was already in serious difficulty before the pandemic hit; it is now in even worse condition. The Financial Times, citing various sources, predicts Italy could enter its fourth recession in a decade.

And while at the beginning of the crisis Italians from their balconies at night sang and insisted: “Andrà tutto bene” (“Everything will be all right”), today many are no longer sure, even as some encouraging signs suggesting that the crisis may have reached its peak have emerged.

The country’s economy was already in serious difficulty before the pandemic hit; it is now in even worse condition. Now, Italy could enter its fourth recession in a decade.

In this nation of 60 million people, a country with the oldest population in the world after Japan (measured by the share of population that is over 65) and a negative birth rate, millions are no longer earning wages because almost all nonessential economic activity has been stopped. More than 178,000 companies had to lay off more than three million workers due to the economic shutdown. These workers have had to line up for state assistance—casa integrazione—that will last for a limited period only.

A big concern is how many of Italy’s businesses will be able to reopen after the coronavirus emergency ends. Many Italian workers were dependent on the nation’s once flourishing tourism industry. That accounts for 6 percent of Italy’s gross domestic product and provided employment to hundreds of thousands in Rome, Florence, Venice, Naples and other cities, as well as at Italy’s seaside resorts.

About 1.7 million people are employed in accommodation and food services alone. Now few expect tourists to visit Italy at all this year. This fact alone could spell disaster for many businesses.

Some three million self-employed Italians are also in great financial difficulty. In an effort to relieve their plight, the government—as part of a 25-billion-euro rescue package—decided to provide a monthly benefit of 600 euros ($650) to each self-employed person for three months.

Unfortunately, so far it has not been easy to access that money. The website of the national welfare system, the Istituto Nazionale Previdenza Sociale, collapsed due to the enormous demand put on it on the very first day that the monthly support could be applied for. The system could not handle the 400,000 applications it received that day, which amounted to 100 requests per second. The head of the I.N.P.S. blamed hackers for the collapse, but few Italians believed this explanation.

About 1.7 million people are employed in accommodation and food services alone. Now few expect tourists to visit Italy at all this year.

At least 60 percent of the officially registered 870,000 caregivers, baby-sitters and domestic help have stopped working or been asked not to come to work. They have either had to use vacation leave they had already accumulated or go on unpaid holiday, as many of their employers are also not working and cannot afford to pay them.

Apart from the thousands of homeless persons and those who have to beg for a living, the worst hit category in Italy have been its gig workers, many of whom are migrants, which the Italian National Institute of Statistics estimates to be around 3.7 million people.

Their situation is desperate; workers in the gig economy had precarious positions even before the coronavirus struck. Most of them do not receive any kind of social security, health care or unemployment benefits. Many are now deeply troubled about paying for food, rent, utilities and other expenses for themselves and their families.

Dramatic evidence of this struggle emerged on April 13 when Italian media reported the plight of a 12-year-old boy, living in a village near the city of Bologna, who phoned the carabinieri (military police) and told them: “We have no food, my dad is out of work, our refrigerator is empty.”

The carabinieri immediately sent officers to visit the boy’s home and, after verifying what he said was true, the officers went shopping and returned with two large bags of groceries, as well as fruit and vegetables, and gave them to the family.

Palermo’s mayo warned last week of the risk of “a social revolt” if there is no government assistance because many thousands of people do not have enough money to buy food.

ANSA, the Italian news agency that reported the story, withheld the names of those involved but revealed that it was an immigrant family of four—the boy, his parents and brother—and said the father had lost his gig job due to the coronavirus lockdown. They were left without a euro in their pockets.

In response to this crisis, the Italian government decided to give “an emergency income” of between 200 and 500 euros ($220-$550) to some three million people (more than one million families) who now have no income whatsoever. There is no guarantee that this money will be enough to see most families through to the end of the crisis.

Palermo’s mayor, Leoluca Orlando, warned last week of the risk of “a social revolt” if there is no government assistance and said “criminal groups could provoke violent acts” (after the attempted looting of a supermarket in the Sicilian capital) because many thousands of people, including many families countrywide—15,000 in Palermo alone—do not have enough money to buy food.

He told the press: “This is not just a problem of the south; my colleagues in the center and the north of the country say the same.” Confirmation of this came last week from Milan, considered the financial capital of the country, where thousands of families and individuals are without money to buy food. La Repubblica’s front page headline on April 4 cried, “Anche Milano ha fame” (“Milan too is hungry”). Caritas Italiana and other charitable organizations such as the Sant’Egidio Community have seen a significant rise in the number of people seeking help.

At the same time, associations, city food stores and ordinary people have shown solidarity to families and individuals in difficulty. The Bon Bon bakery near Piazza Bologna in Rome, for example, filled plastic bags with pizzas, bread and cakes and placed them near the entrance to the bakery with a notice: “These are for you, if you need them.”

As the economic crisis deepens, organized crime perceives an opportunity to extend its claws, and not only in southern Italy.

Much the same happened near Piazza della Radio in the Eternal City. Across town, Romans who had plenty filled plastic bags with pasta, flour and other necessities for cooking, and made them available to the needy.

Nineteen associations and charitable organizations in Rome now collect food from those willing to give and distribute it to those who have not. There is no lack of volunteers ready to assist those in need in whatever way they can.

The crisis has brought out the best in people; it has also brought out the worst in some. As the economic crisis deepens, organized crime perceives an opportunity to extend its claws, and not only in southern Italy. Criminal gangs have been offering money to families in need or to owners of small or medium businesses, but at an undisclosed price that will have to be paid in the future. Loan sharks, too, see increased possibilities for gain.

Pope Francis is well aware of this criminal activity, and as he began his live-streamed Mass on April 8 he asked his more than half a million virtual audience members “to pray for people who, during this time of the pandemic, trade at the expense of the needy and profit from the needs of others, like the mafia and usurers. Pray that the Lord may touch their hearts and convert them.”

The Italian government’s rescue package includes providing help to companies, homeowners with mortgage payments and people facing unemployment. But to overcome these grave problems and ensure the reconstruction of its economy after the coronavirus pandemic ends, Italian officials are considering broader, bolder measures. Together with leaders from other countries like Spain that face similar difficulties, Italian officials are currently engaged in an effort to convince the other member states of the European Union to create a new fund, something similar to the Marshall Plan after the Second World War, to enable a rebuilding of economies shattered by the coronavirus pandemic.

For the European Union, not only for Italy, this is a decisive moment. A failure by E.U. leaders to address this crisis, the worst since World War II, in an adequate way risks undermining the union itself.