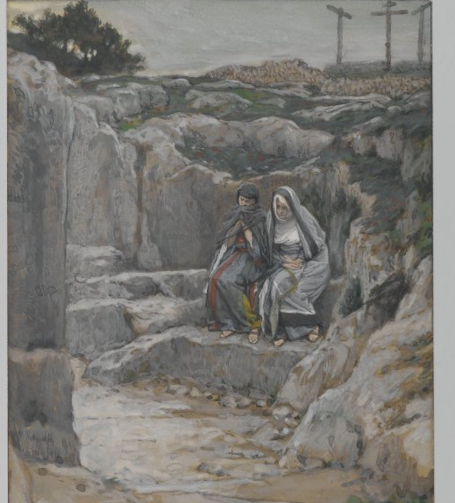 "The Two Marys Watch the Tomb of Jesus," by James Tissot.

Most of our lives are spent in Holy Saturday. In other words, most of our days are not filled with the unbearable pain of a Good Friday. Nor are they suffused with the unbelievable joy of an Easter. Some days are indeed times of great pain and some are of great joy, but most are…in between.

Most of our days are times of waiting, as the disciples waited during Holy Saturday.

Waiting for life just to get...better.

But there are different kinds of waiting.

There is, for example, the wait of despair. Here we know—at least we think we know—that things could never get better, that God could never do anything with our situations. Nothing will, or could, ever change.

This may be the kind of waiting that forced the fearful disciples to hide behind closed doors on Holy Saturday, cowering in terror. Of course, they could be forgiven. After Jesus was executed they were probably in danger of being rounded up and executed by the Roman authorities. (Something tells me that the women disciples, who overall proved themselves better friends than the men during the Passion, were more hopeful afterward.)

We are called to the wait of the Christian, which is called hope.

The days before the papal conclave that elected Pope Francis, for example, saw a lot of that kind of waiting, much of it from otherwise intelligent commentators and thoughtful op-ed writers—and some of it even from believers. That time might be hard to remember a few years into Francis’ papacy, but the sense of “things will never change” was palpable.

The church with all its problems—sexual abuse scandals, financial mismanagement, increasing irrelevance—was doomed, we were told over and over. Mired in insurmountable problems, which could never be addressed. And of course, said the doubters, the College of Cardinals would never elect anyone who might do things differently, who might shake things up, who might give the church a sense of renewal. Since the cardinals were all were all cut from the same cloth we were told, they would never be able to make any kind of bold decision.

The notion that the Holy Spirit might work within that group, human as it was, was set aside, rejected and even laughed at. The Holy Spirit? Please. The idea that a new pope might approach things differently, speak differently, act even a little differently than his predecessors? Please.

Hearing this from believers was surprising, to say the least. These people were waiting in despair. And this is not the waiting that Christians are called to.

Then there is the wait of passivity, as if everything were up to "fate." In this waiting, there is no despair, but not much anticipation of anything good either. It is the wait of "Whatever." This is also not the waiting that we are called to.

Awake, O sleeper: A meditation on Holy Saturday
Matt Malone, S.J.
We are called to the wait of the Christian, which is called hope. It is an active waiting; it knows that, even in the worst of situations, even in the darkest times, God is powerfully at work, even if we cannot see it clearly right now. The disciples’ fear after Good Friday was understandable. But we, who know how the story turned out, who know that Jesus will rise from the dead, who know that God is with us, who know that nothing is impossible for God, are called to wait in faithful hope. And to look carefully for signs of the new life that are always right around the corner—to look, just like a few of the disciples were doing on Holy Saturday.

Because change is always possible, renewal is always waiting, and hope is never dead.

James Martin, S.J., is editor at large at America and the author of Jesus: A Pilgrimage.

The difficult thing about waiting for change within the Church is that change moves so slowly that it is hardly possible to expect change in one's own lifetime.

These days, it seems there is just enough time for personal change and renewal. I humbly suggest letting the Holy Spirit change what it wishes in the Church.

Congratulations on your new responsibility!

Change happens whether we agree or disagree, recognize or not see its benefits, or if anything happens in one's lifetime. The Holy Spirit is a power that never stops working and we will always be questioning.