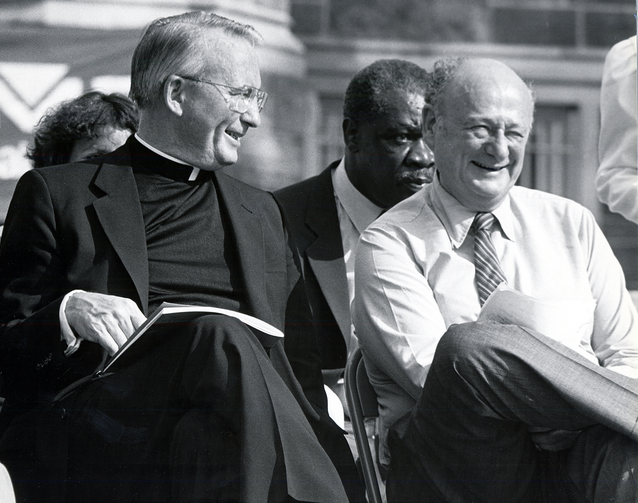 Joseph A. O’Hare, S.J., is a towering figure in the history of America magazine. As America’s 10th editor in chief, Joe presided over the magazine’s 75th anniversary, stewarding the journal through some of the most tumultuous events of the 20th century and through difficult years for both the nation and the city he loved.

George W. Hunt, S.J, America’s 11th editor in chief, once wrote that “Joe O’Hare was the most intellectually broadly gifted Jesuit” he had ever met. “Not only a lucid and persuasive writer, but an excellent extemporaneous speaker…. And not an ideologue, being instinctively suspicious of enthusiasms ‘not thought through as to their consequences.’”

Joe O’Hare had a quick, nimble mind that was the master of its own house. No one has ever accused him of being “predictably anything.”

Father Hunt was spot on. Joe O’Hare had a quick, nimble mind that was the master of its own house. As a Jesuit novice, I had the opportunity to comment on an editorial idea that Joe had proposed. I said that we should publish the piece only if we truly had something new to say and that the text should not be predictably left-wing.

Joe’s response: “No one has ever accused me of being predictably anything.”

Which was not quite true. He was predictably insightful, warm and friendly, a world-class raconteur with a spellbinding Irish charm. Always supportive of me, he was one of the first to congratulate me when I was named editor in chief. As a subtle homage to Joe, the first sentence of my first Of Many Things column was the same sentence that he had written in his first column some 40 years earlier. When I saw him later, he wryly remarked: “Thanks. Homage is one word for it. Plagiarism is another.”

One of the last times I visited Joe was when I went to update him about the progress of the America postgraduate media fellowship that would be named in his honor. He greeted me with that jolly, mischievous smile that was so familiar to those of us who were lucky enough to know him. “Matt,” he said, “How’s our favorite magazine?”

My answer, then and now: “All the better for its long association with Joe O’Hare.”

More: Jesuits / US Church / US Politics