What lies ahead for Pope Francis as he enters the eighth year of his pontificate? 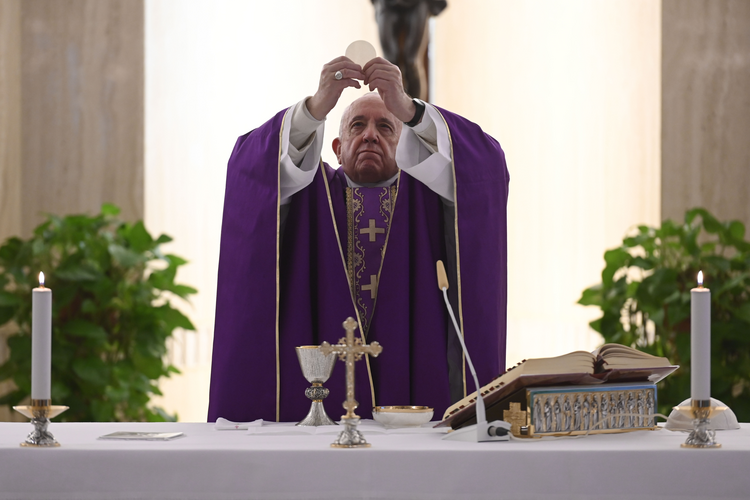 Pope Francis celebrates Mass on March 12, 2020, in the chapel of his Vatican residence, the Domus Sanctae Marthae. At the beginning of the liturgy, the pope encouraged people to pray for their government leaders, who must make difficult decisions to contain the coronavirus pandemic. (CNS photo/Vatican Media)

Today is the seventh anniversary of the election of Pope Francis. It is a holiday in the Vatican, but it takes place under the most extraordinary circumstances dominated by the coronavirus pandemic that began in China and then spread worldwide, infecting some 138,000 people in at least 117 countries. So far it has caused the deaths of more than 5,000 people, including more than 1,200 in Italy.

Francis, who turned 83 on Dec. 17, has recovered from a very bad cold and is now in good health and doing what he can to remain close to the people amid this disastrous pandemic. He celebrated Mass as usual this morning, in the chapel of Santa Marta, the Vatican guesthouse where he lives. The celebration was broadcast live on the internet by Vatican Media as has happened throughout this week so he can be close to people who cannot attend Mass in Italy. Church services have been suspended until April 3.

In his introduction to the Mass, Pope Francis reminded his virtual audience that “in these days we unite ourselves with the sick and the families that are suffering this pandemic.”

He said, “I would also like to pray today for pastors who need to accompany the people of God during this crisis. May the Lord grant them the strength and the ability to choose the best ways to help.”

Pope Francis will continue his all-out efforts to eliminate the triple form of abuse by clergy in the church—the abuse of conscience, of power, of sex.

Then in what was seen as a reference to the closing of all churches in Rome decreed by order of the cardinal-vicar of the diocese on March 12, he added, “Drastic measures are not always good.”

He told those following this Eucharistic celebration, “We pray that the Holy Spirit might grant pastoral discernment to pastors so that they might perceive measures that might not leave the holy, faithful people of God alone, and so that people of God might feel accompanied by their pastors.”

After Mass and breakfast, he went back to work at his desk. Since his election as pope on March 13, 2013, he has made 32 pastoral journeys to 50 countries outside Italy and is now the second most-travelled pope in history after St. John Paul II. He had intended visiting several more countries this year, perhaps as many as eight or nine, but the coronavirus epidemic has scuttled most, if not all of those visits, beginning with Indonesia, Timor Leste, Papua New Guinea, and perhaps Singapore—a ten-day journey that was being scheduled for the first half of September. Diplomatic and church sources in Asia and Rome told America that this visit has been cancelled for this year at the request of those governments, but they hope it can be rescheduled for 2021.

Francis still has plans to visit Malta at the Pentecost weekend, May 30 to May 31, but that visit too seems unlikely given that the bishops of Malta and Gozo, on the advice of the country’s health authorities, have cancelled all Masses and religious functions in the country, and the government has banned flights to and from Italy, which is seen as the epicenter of the spread of coronavirus in Europe.

The pope’s plan to visit Iraq in the first half of the year crashed too because of the renewed fighting in that country, while his much desired visit to South Sudan with the Archbishop of Canterbury and the Moderator of the Church of Scotland, before Easter, had to be postponed due to the delay in the formation of a unity government in the country. The Covid-19 pandemic has introduced a whole new obstacle to the realization of that plan.

The first Latin-American pope had also indicated that he would visit Greece, Cyprus and Montenegro this year and perhaps even Lebanon, given its difficult political situation, and Hungary (for the international Eucharistic congress), but there is now a serious question mark over the feasibility of any of these possibilities. No one knows now how long the Covid-19 pandemic will continue.

Francis is expected to soon authorize the publication of the report on the former-cardinal Theodore McCarrick. He will also have to address the case of Cardinal George Pell once the High Court of Australia issues its verdict on his final appeal.

Likewise, the international Global Education Compact gathering scheduled for Rome in May has also been rescheduled to November.

All this leaves Francis with more free time than he had anticipated, enabling him to attend to other important matters. The first among these is the approval of the new constitution for the reform of the Roman Curia that bears the title, “Predicate Evangelium” (“Preach the Gospel”), and the implementation of the final steps of that reform in terms of curial structures. If all this can be achieved by the end of June as hoped, Francis could make a series of important top-level personnel changes in several departments, known as “discasteries,” of the Roman Curia.

At the same time, Pope Francis will continue his all-out efforts to eliminate the triple form of abuse by clergy in the church—the abuse of conscience, of power, of sex—and to ensure that a safe environment is established in all church institutions worldwide for children and young people. This effort will also mean bringing justice for many victims who have yet to get redress for their suffering.

In addition to all this, Francis is expected to soon authorize the publication of the report on the former-cardinal Theodore McCarrick. He will also have to address the case of Cardinal George Pell once the High Court of Australia issues its verdict on his final appeal.

Francis will continue to give priority attention to the phenomenon of migration worldwide, caused by war, poverty and climate change; he will not remain silent on what has become the greatest humanitarian crisis since World War II.

As he enters the eighth year of his pontificate, Pope Francis will continue to devote much of his attention to promoting synodality in the church. He sees this as key to ensuring that the laity can have their proper role in the church alongside the bishops, priests and consecrated persons. He sees it as a way of re-energizing the whole church in a missionary mode. For this reason, he has convened a synod of bishops in October 2022 and is looking forward very much to participating in that highly important event.

In the immediate future, however, Pope Francis will have to take decisions regarding Holy Week ceremonies in the Vatican and Rome. While the strict norms and directives issued by the Italian government and the Vatican to combat the coronavirus pandemic are due to expire on April 3, that leaves just two days before Palm Sunday for the pope to make a decision about a public celebration. There is no certainty that Palm Sunday celebrations will continue as they have in the past given so many unknown factors.

Even if restrictions are lifted, there is no certainty that ceremonies involving large crowds can be held in Saint Peter’s Square or Basilica during Holy Week or at Rome’s Coliseum for the Way of the Cross on Good Friday evening on April 10. Pope Francis is likely to lead a very different kind of Holy Week to anything that has been seen in Rome since the Second World War.