Delivering Angelus by video, Pope Francis expresses closeness to all affected by coronavirus 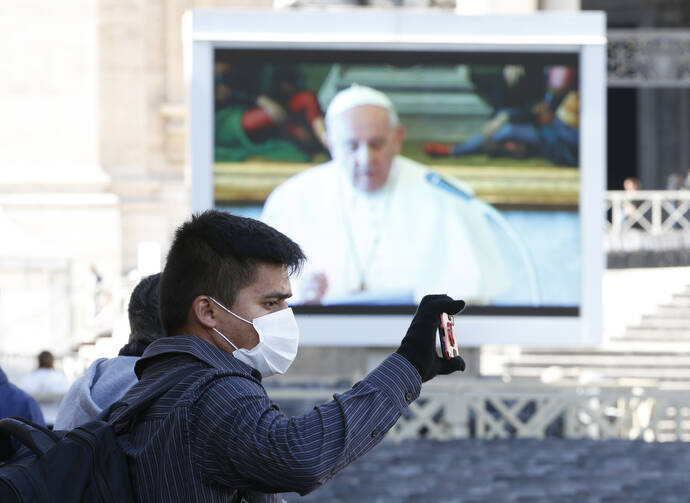 A man wearing a mask takes a photo as Pope Francis appears on a video monitor in St. Peter's Square as he leads the Angelus from his library in the Apostolic Palace at the Vatican March 8, 2020. (CNS photo/Paul Haring)

In a live-streamed address carried by Vatican Media at midday, Sunday, March 8, Pope Francis assured all “those suffering from the current coronavirus epidemic” in 93 countries worldwide and “all those that are caring for them” that he is “close” to them “in prayer.” He urged the faithful “to live this difficult moment with the power of faith, the certainty of hope and the fervor of charity.”

He broke with tradition today by speaking from the library of the Vatican’s Apostolic Palace where he normally meets heads of state and religious leaders, instead of from the study window on the third floor of the same building overlooking St. Peter’s Square. The shift to deliver the papal Angelus by video, which will also apply to the Wednesday general public audience, aligns the Vatican with the Italian government’s restrictions on public gatherings as it seeks to prevent the spread of the coronavirus. The Vatican is seeking to comply with these precautionary measures by doing everything possible to avoid holding papal audiences or other events that attract many people to St. Peter’s Square.

He urged the faithful “to live this difficult moment with the power of faith, the certainty of hope and the fervor of charity.”

The Vatican also announced today that the Vatican Museums and its other museums around Rome and in Castel Gandolfo will be closed until April 3, corresponding with the Italian governments restrictions. Access to the catacombs and excavations under St. Peter’s will also be suspended during this time. Additionally, the Vatican said that Pope Francis has decided that, during this time while public gatherings are restricted, his morning Mass at Santa Marta will be transmitted live by Vatican Media to enable those who wish “to join in prayer with bishop of Rome.”

Francis began his address today by greeting his “brothers and sisters” and commenting that “today’s prayer of the Angelus is a bit strange, with the pope ‘encaged’ in the library.” As he spoke, he saw on a monitor people in St. Peter’s Square to watch his address on large video screens, a gathering many times smaller than is usual for the Sunday Angelus. Among those present in the square were groups demonstrating in solidarity with the displaced people in Idlib, Syria, where the war is still raging, and told them, “I see you, I am close to you!” The solidarity groups carried a banner saying “For the forgotten of Idlib,” and seeing this, Francis said, “thank you for what you are doing.”

The 83 year-old pope appeared to be in good health and fully recovered from his bad cold, and, unlike last week, he never coughed throughout his address. He told his virtual audience that he was praying the Angelus in this way “to comply with the preventative measures” decreed by the Italian government and the Vatican, to avoid crowded situations “that can favor the transmission of the virus.”

Italy has become the epicenter of the spread of the disease in Europe, and last evening the authorities announced that since the virus hit the country two weeks ago some 5,883 people have been infected (1,247 more than the previous day), and said currently 5,061 persons have tested positive for the virus, 589 have recovered and 233 have died (36 in the last 24 hours). In a drastic measure to contain the virus, and prevent it spreading even more, the Italian government last evening placed 14 million people in sizable part of northern Italy, including the region of Lombardy and the cities of Milan and Venice under lockdown until April 3. These mass quarantine restrictions are the first to be adopted outside China, where they are in place around Wuhan and the surrounding areas where the virus first began spreading.

In his message, after commenting on the Gospel of the Transfiguration that was read in churches today, Pope Francis drew attention to the humanitarian crisis that is unfolding in Idlib, Syria, as he had done at the beginning of today’s virtual encounter with the faithful across the globe.

Francis, who is deeply concerned about the ongoing conflict in Syria, a country he hopes to visit this year, greeted the associations and groups present in the square, but also elsewhere in the world, “that are engaged in solidarity with the Syrian people, and especially with the inhabitants of north-west Syria, who are forced to flee from the recent developments of the war.” He expressed yet again his “great apprehension for the inhuman situation of these defenseless people, among them many children, that are risking their life.” Appealing to the international community and his global audience, he said, “one must not turn away one’s gaze from this humanitarian crisis, but rather give it priority with respect to every other interest.”

Francis then turned to the coronavirus epidemic that has now made victims in 93 countries outside China, and some 101,927 confirmed cases worldwide (21,114 outside China) since the start of the epidemic, and caused the deaths of some 413 persons outside China, according to the World Health Organization and Xinhua news agency.

I am close in prayer to the persons that are suffering from the current epidemic of coronavirus, and all those that are taking care of them.

He said: “I am close in prayer to the persons that are suffering from the current epidemic of coronavirus, and all those that are taking care of them. I join my brother bishops in encouraging the faithful to live this difficult moment with the power of faith, the certainty of hope and the fervor of charity.”

He told his virtual audience and those in the square, “the Lenten season helps us to give an evangelical meaning to everything, even at this moment of trial and suffering.”

He concluded his message by wishing everyone “a good Sunday” and asking them to pray for him. Then, before wishing them an enjoyable lunch as he always does, he surprised everyone, but delighted those in St. Peter’s Square who were following the audience on large video screens, by telling them, “And now I will come to the (study window) to see you briefly in real time!”

He then went from the library to the study window on the third floor of the Apostolic Palace. Aides opened the shuttered window, and Francis appeared drawing cheers of delight from the people scattered across St. Peter’s Square, most of them standing a meter’s distance from each other as required by the new Italian government regulations, which the Vatican has sought to comply with.

Pope Francis smiled broadly, clearly happy that he had come here, just for one minute. He waved to the crowd, and blessed them, and then disappeared again back into the apartment.

Later that same day, the Vatican issued norms and regulations that will apply to all who work in Vatican City or its extra-territorial institutions, aimed at preventing, identifying and containing the virus.