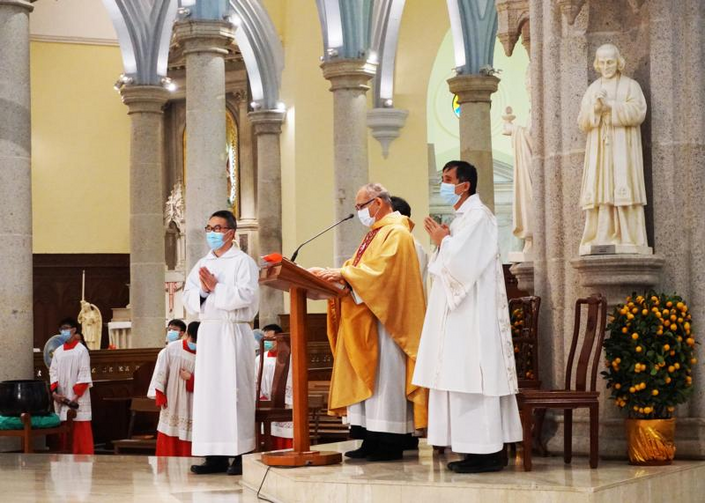 Catholics celebrate Mass at Hong Kong's Catholic Cathedral with protective masks Feb. 2, 2020. The threat of spreading the coronavirus has forced Catholic officials in Hong Kong to suspend all public Masses on Sundays and weekdays from Feb. 15 to Feb. 28. (CNS Photo/Francis Wong)

HONG KONG (CNS) -- The threat of spreading the coronavirus has forced Catholic officials in Hong Kong to suspend all church programs Feb. 15-28, including Sunday Masses and the Ash Wednesday liturgy that marks the beginning of Lent.

Ucanews.com reported Cardinal John Tong, apostolic administrator of Hong Kong, said the "disappointing" decision had been made "because the next two weeks will be a crucial time to suppress the epidemic."

"Some church members may be disappointed" with the diocesan move, the cardinal said in his Feb. 13 pastoral letter. "This is not an easy decision."

The move comes amid global fears that the epidemic, now called COVID-19, has worsened in China against the prediction of experts. The epidemic, first reported in Wuhan city of Hubei province, has spread across the world and claimed more than 1,300 lives, with more than 60,000 confirmed cases as of Feb. 13, mostly in China.

Hong Kong, which has open borders with China, has reported 50 confirmed cases and one death. The densely populated Hong Kong city-state of 7.4 million people is on high alert to check the virus, as thousands have crossed over from mainland China to avoid the infection, ucanews.com reported.

"At this difficult time," Catholics must "deepen our trust in God and implement our Christian love for our neighbors and all people," the cardinal's message said.

Cardinal Tong said he wanted Catholics to fulfill their Mass obligation by participating in Mass online, receiving Holy Communion spiritually and meditating on the Scriptures or saying the rosary at home.

He also urged Catholics to help each other; share anti-epidemic materials; live the Gospel virtues of faith, hope and love; and pray for each other.

The new mandatory quarantine rules took effect Feb. 8, with people arriving from the mainland required to be quarantined for 14 days to curb outbreaks in the community. People leaving the camps without permission commit a criminal offense punishable with a six-month jail term and a fine of $25,000 (US$3,220), the government has said.

With the prices of essential goods soaring and unavailability of medical masks, residents have raided supermarkets and pharmacies, braving chilly winds.

The government has given its 176,000 civil servants the option of working from home until Feb. 23 to reduce the risk of the virus spreading.

Show Comments ()
Comments are automatically closed two weeks after an article's initial publication. See our comments policy for more.
Provide feedback on this article
Join the conversation: Login or create an account
Before you can comment, you need to update your profile to include your first and last name, as required in our comments policy. Then reload this page and you'll be set up for commenting. Update your profile
Advertisement
More: Asia / Health & Wellness

The Word Lent Reflections
Join us throughout the Lenten season as we offer a special presentation of the Gospel, Passion and Resurrection narratives.
Isabelle SenechalApril 07, 2020 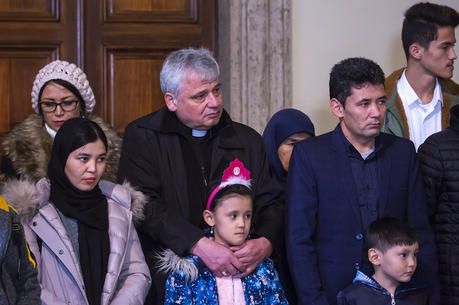 Papal almoner issues extraordinary appeal to Vatican churchmen for coronavirus offering
Cardinal Krajewski invited these churchmen to “participate in the sufferings of all those who are enduring trial” because of the coronavirus “by giving an offering.”
Gerard O’ConnellApril 07, 2020

Catholic Charities: Nonprofits need more government aid to respond to coronavirus economic fallout
Catholic Charities leaders say that while the government relief package signed into law on March 27 by President Trump will help meet some of the initial need, much more action is needed for charities to be able to meet the expected demand.
Michael J. O’LoughlinApril 06, 2020