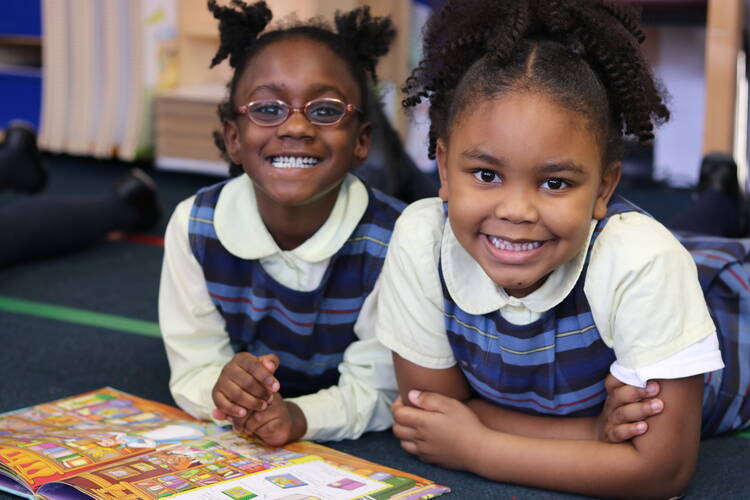 A group of preschoolers at St. Ethelreda School, located in Chicago’s Auburn-Gresham neighborhood, walk single-file down a hallway. They are flanked by posters celebrating Black History Month that depict famous African Americans including Barack and Michelle Obama, Martin Luther King Jr. and Oprah Winfrey. As the youngsters pass by their principal, some turn to wave. And with a smile on her face, Denise Spells waves back.

Smiles have been plentiful at St. Ethelreda since Jan. 29, when the Big Shoulders Fund, a Chicago foundation that supports the city’s Catholic schools, and the Archdiocese of Chicago announced a partnership that will inject more than $92 million into 30 Catholic schools in some of Chicago’s most challenged neighborhoods, along with a promise to keep their doors open for the next decade. This money is in addition to the tens of millions of dollars the foundation and the archdiocese already anticipate spending on roughly 140 other archdiocesan-administered schools. For St. Ethelreda’s principal, the news could not be more welcome. She said she ran through the hallways announcing the news to staff when she learned of it earlier this year.

“The school is still open and still standing because God left us here for a reason,” Dr. Spells said.

In late January, the archdiocese and Big Shoulders Fund announced that they would each pledge more than $40 million to support 30 schools serving about 5,600 students on Chicago’s South and West Sides—$47.5 million from Big Shoulders and $44.9 million from the archdiocese. The money will help with scholarships, technology, curriculum and professional development. In addition, the archdiocese pledged not to shutter any of the schools while the program is in effect, freeing staff and parents from perennial worries about closures and giving donors peace of mind that the schools will be around long enough to put their contributions to good use.

Smiles have been plentiful at St. Ethelreda since Jan. 29, when the Big Shoulders Fund and the Archdiocese of Chicago announced a partnership that will inject more than $92 million into 30 Catholic schools.

The schools will remain under the direction of the Archdiocese of Chicago, but the arrangement gives the foundation, established in 1986 by the late Cardinal Joseph Bernardin, more say in the hiring and training of principals. The foundation will continue to offer professional development and help schools with marketing and budgeting. Joshua Hale, the president and C.E.O. of Big Shoulders Fund, said the partnership gives the participating schools “a new lease on life.”

The agreement follows a five-year pilot program that partnered Big Shoulders with a dozen Catholic schools which faced closure because of enrollment and financial challenges. Today, Mr. Hale said, nine of those schools are still open and rank among the highest performing in academics, finance and enrollment.

“Think of what that means for a principal, an educator, a parent, a guardian in these neighborhoods, to not worry every year, ‘Is my child’s school going to be open? That helps with a lot of confidence everywhere,” Mr. Hale said. “If not for this agreement, I don’t know how many of these schools would be around the next three years.”

Just weeks before the announcement with Big Shoulders, the archdiocese said that five more schools would close next year. The archdiocese’s 200 elementary and secondary schools still comprise one of the largest U.S. private school systems, but Catholic schools in Chicago, like others across the country, struggle to keep enrollment high enough to cover operating costs. Total enrollment in Chicago Catholic schools today is about 71,000, down from more than 95,000 eight years ago. And Chicago is not alone when it comes to challenges facing Catholic schools. According to the National Catholic Education Association, more than 1,200 Catholic schools have been closed or consolidated since 2009, and the number of students enrolled in Catholic schools has fallen by about 403,000 in that time.

In recent years, some dioceses have implemented funding partnerships to try to keep school doors open. In Philadelphia, 15 independent Catholic schools are part of a network called Independence Mission Schools, and seven Catholic schools in Harlem and the Bronx are part of a program called Partnership Schools. In Seattle, the Fulcrum Foundation works with 73 schools to defray tuition and in Boston, the Catholic Schools Foundationawards about 4,000 scholarships to students Catholic schools.

The archdiocese closed the parish that once sponsored the school, but Dr. Spells led the community in convincing church leaders to keep St. Ethelreda open. Now enrollment is rebounding.

But Kevin Baxter, chief innovation officer at the National Catholic Educational Association, told Crain’s Chicago Business that the Big Shoulders partnership is “the largest scale on a financial perspective that I've heard of.”

Mr. Hale called the new partnership “a massive change” in terms of funding, the length of commitment and school management. He said he believes the model could be replicated in other dioceses, if partnering groups were willing to consider scale and focus on “preserving the historically important elements of locally owned and run Catholic schools.”

Jim Rigg, the superintendent of Catholic schools in the Archdiocese of Chicago, said that while Big Shoulders is gaining a stronger role in how the schools are managed, he sees the agreement as “a deepening of our partnership.” He noted that the “Archdiocese of Chicago still remains in the lead on all matters related to the Catholic faith.” He said the agreement will “give these schools some security. It’s going to help a lot of families in these schools.”

The new agreement covers 30 schools, but Big Shoulders will continue to support 45 other schools in Chicago. Together, the 75 schools educate about 20,000 students, according to the foundation. Most of the students, about 80 percent, are students of color, and more than six in 10 live in poverty.

Another Chicago school that benefits from the new agreement, located about two miles northeast of St. Ethelreda, is Leo High School. Like St. Ethelreda’s student population, most of Leo High’s students are African American and from non-Catholic backgrounds. Also like St. Ethelreda, Leo High is not attached to a parish but holds to its Catholic identity by celebrating Mass for students, teaching religion classes and instilling values such as community service.

The new partnership between the archdiocese and Big Shoulders means students at Leo High can focus on classes and graduation and not worry about whether their school will close.

Dan McGrath, the president and an alumnus of Leo High, greets students with handshakes as he walks through the halls. He asks one student about choir rehearsal and as he waves to students getting ready for gym class, the former Chicago Tribune sports editor points with pride to the gym’s LED lighting and shiny wood floor.

Mr. McGrath said that the school enrolled north of 1,300 young men, most of them white, in the years following World War II. But as the neighborhood changed in the 1970s, becoming predominantly African American, enrollment plummeted. Today it stands at under 200, though it has stabilized in recent years.

But Mr. McGrath said the new partnership between the archdiocese and Big Shoulders means students at Leo High can focus on classes and graduation and not worry about whether their school will close. That was a distinct possibility six years ago, he said, when the building’s nearly 90-year-old furnace broke down, and the school struggled to raise money to replace it.

“It gives us breathing room,” Mr. McGrath said of the new agreement. Over the next few years, Leo High School will continue to fine-tune its curriculum, expand its donor base and embark on building improvements. “We can really work at making Leo the school that these young guys deserve. There were many, many years when we had to cut corners, but now that we’re up and running in a good spot, and we know that we’ve got this window of opportunity to do some things, I think we can really turn this place into a thriving, great school.”

Mr. McGrath said that all Leo’s seniors have graduated in the past nine years, with more than 90 percent of graduates going on to college.

“Enrollment is creeping upward. It’s incremental, it’s not dramatic, but in Catholic schools, if you’re not losing, you’re gaining. And we are legitimately gaining. So we feel good about that,” he said.

Back at St. Ethelreda, Mr. Hale praises Dr. Spells’s tenacity in keeping the school going, saying, “Dr. Spells is a woman of tremendous faith” and calling her “a strong C.E.O. of this school” who has been principal for more than 25 years.

In 2007, the archdiocese closed the parish that once sponsored the school, but Dr. Spells led the community in convincing church leaders to keep St. Ethelreda open. Enrollment is rebounding, graduates are attending some of the city’s best public and private high schools, and last year, the school’s chess team were state champions.

While she can breathe easier knowing the school will remain open for the next decade, Dr. Spells said work remains. She would like enrollment to continue trending upward, and she wants to see an unused former convent next to the school transformed into a multi-use space for the school and community.

All her energy is aimed at one thing, Dr. Spells said, a goal that is bolstered by the school’s relationship with Big Shoulders. “If you send your child to St. Ethelreda School, when they leave, they will be a mature, responsible, respectful person who will be a role model for others,” she said.