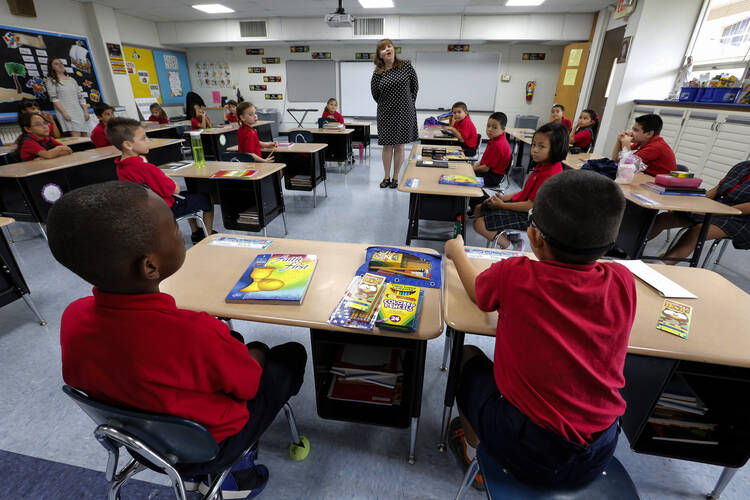 A Catholic school classroom in Phoenix, Ariz., gets down to work. (CNS photo/Nancy Wiechec)

On Jan. 22, the Supreme Court will hear arguments in Espinoza v. Montana Dept. of Revenue, a case that will consider whether the U.S. Constitution requires what Montana’s Blaine Amendment prohibits—the inclusion of religious schools in a state tuition tax credit program. If the court follows its 2017 decision in Trinity Lutheran Church of Columbia, Inc. v. Comer, which struck down a Missouri law that excluded religious schools from a state-funded playground resurfacing program, the path will be cleared for school choice laws that benefit religious schools.

Less important on a national scale, but of immediate concern to the affected parties, are disputes regarding the enforcement of grooming standards at religious schools. Like the Blaine Amendment cases, these disputes require application of fundamental church-and-state principles that are unique to the United States.

Federal Anti-Discrimination Laws
Several federal and state laws prohibit various forms of discrimination. Some, but not all, of these include exemptions. When it comes to gender discrimination in admissions, for example, federal law permits even public school systems to operate separate, but equal, elementary and secondary schools; and private colleges and universities may request exemption from Title IX’s gender equality requirements.

Disputes regarding the enforcement of grooming standards at religious schools require application of fundamental church-and-state principles that are unique to the United States.

All levels of religious schools also are exempt from Title IX’s restrictions on discriminatory practices within co-ed schools if required by “the religious tenets of such organization.” Thus, while changing societal norms and lawsuits brought by transitioning students, transgender students and students who prefer nonbinary clothing choices are challenging public school gender-based distinctions, religious schools may base their dress codes on traditional male and female roles and modesty requirements.

Racial discrimination, however, is a different matter. Race-based distinctions will rarely, if ever, be given legitimacy. A Free Exercise Clause exemption from an otherwise applicable law that requires racial equality may be asserted only by “a school or church which holds racial segregation as a religious tenet,” and even that assertion may not succeed.

In Bob Jones University v. United States (1983), the Supreme Court upheld an Internal Revenue Service decision to deny tax-exempt status to a university that prohibited interracial dating and marriage. The Supreme Court did not absolutely foreclose the possibility that the Free Exercise Clause may protect religiously motivated racial discrimination but noted that “racial discrimination in education is contrary to public policy.”

As one law professor put it, “post-Bob Jones,... it is safe to say that the idea that race discrimination—otherwise prohibited by law—could be justified on religious grounds is not a claim that any contemporary court or other lawmaking body would seriously consider. It is, in a word, too odious to be entertained.”

Thus, in Silva v. St. Anne Catholic School, a federal district court held that 42 U.S.C. section 1981, a post–Civil War statute that prohibits racial discrimination in private contracts, applies when a religious school is alleged to have violated its own non-discrimination policy. The court also determined that Title VI of the Civil Rights Act of 1964, which prohibits discrimination on the basis of “race, color, or national origin,” is applicable to religious schools that benefit from federal financial assistance, such the National School Lunch Program.

Race-based distinctions will rarely, if ever, be given legitimacy.

The case involved a school’s adoption and implementation of an English language–only policy. The court ruled in favor of the school because there was no evidence of racial bias in the adoption of the policy and its implementation did not create an unlawfully hostile educational environment. Still, the case serves as a reminder that religious school policies that raise questions of racial bias are subject to federal anti-discrimination laws.

The application of these laws is fact-specific, and the interpretation of “discrimination” is controversial and subject to change. The current secretary of education, Betsy DeVos, has been both criticized and praised for her rollback of the Obama administration’s guidance on discrimination in school discipline, which required schools to consider the disparate racial impact of their enforcement policies.

Despite this policy change, racially discriminatory grooming and dress codes are not permissible. In 2017, for example, a charter school in Arizona was found to have violated Title VI when a child with an Afro hairstyle was “treated differently than students of other races” who also came to school with non-compliant hairstyles.

A charter school in Arizona was found to have violated Title VI when a child with an Afro hairstyle was “treated differently than students of other races” who also came to school with non-compliant hairstyles.

Regardless of whether the current administration would challenge a religious school’s enforcement of a dress code that disproportionately affects members of certain racial groups, section 1981 and Title VI provide a basis for private lawsuits. Many grooming and dress code policies were written decades ago, when school administrators were less aware of the harm done by culturally insensitive restrictions

Children (and adults) suffer when they are ostracized for their natural hair or are denied the ability to wear hairstyles favored within their social groups. School policies that make it more likely for non-white children to be disciplined or sent home for violations contribute to educational disparities.

Some rules, such as those against “bushy” hair, are more likely to run afoul of federal anti-discrimination laws than others, but school and church officials should review their grooming and dress codes to eliminate all racially biased restrictions. For example, a policy against all braided hair is less overtly discriminatory than a prohibition on cornrows, which are commonly worn by children of African heritage, but both should be eliminated unless religiously or educationally justified.

State and local anti-discrimination laws
Only three states have expanded the definition of racial discrimination to “include traits historically associated with race.” In 2019, the Crown Coalition (Creating a Respectful and Open World for Natural Hair), which is “dedicated to the advancement of anti-discrimination legislation across the United States,” successfully lobbied for legislation in California, New Jersey and New York that clarifies the definition of “race” to include “hair texture and protective hairstyles,” such as “braids, locks, and twists.”

Currently, these laws only apply to public schools, but a bill to make the New York law applicable to private and religious schools has been introduced in the New York State Senate. According to the CROWN Coalition, Cincinnati, Ohio and Montgomery County, Maryland also have expanded their anti-discrimination laws to protect hairstyles favored by certain racial and cultural groups. Exemptions for religious schools and employers are specific to each jurisdiction. Cincinnati’s code, for example, specifically excludes religious organizations.

These exemptions may not last forever. The bill to eliminate New York’s private school exemption is more likely to pass as headlines about a young boy whose cornrows were prohibited by his Catholic school caught the attention of local politicians. Thus, one school’s insistence on enforcing an outdated and petty rule could result in a loss of autonomy for all private schools; and, as the Supreme Court held in Employment Division v. Smith, the Free Exercise Clause will not shield religious groups from universally applicable laws.