CARA study finds bishops are satisfied with their life and ministry

CARA study finds bishops are satisfied with their life and ministry 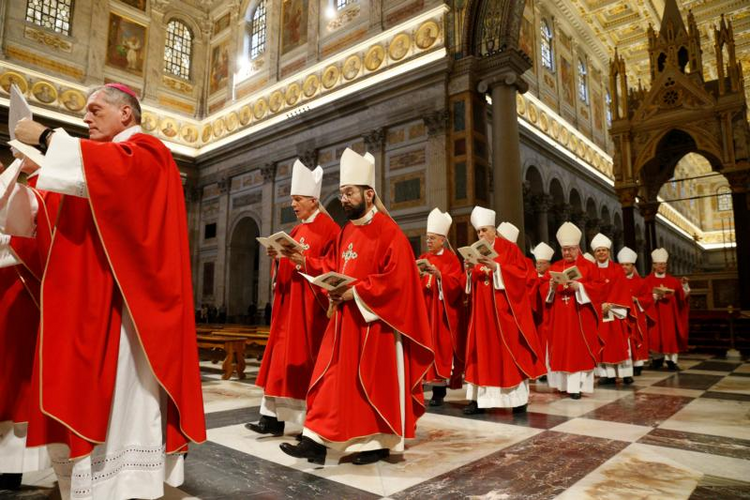 Bishop Daniel E. Flores of Brownsville, Texas, center, and other U.S. bishops from Arkansas, Oklahoma and Texas arrive to concelebrate Mass at the Basilica of St. Paul Outside the Walls in Rome Jan. 21, 2020. The bishops were making their "ad limina" visits to the Vatican to report on the status of their dioceses to the pope and Vatican officials. (CNS photo/Paul Haring)

MINNEAPOLIS (CNS) -- Catholics may be surprised to learn that many U.S. bishops describe their lives as both all-consuming and satisfying, a priest-researcher said.

"These are guys who generally get up very, very early in the morning, pray about two hours every day and work about 10 hours a day," Father Stephen Fichter, a research associate at the Center for Applied Research in the Apostolate in Washington, which conducted the survey. "(They) just really do some interesting things and there are a lot of difficulties that they're dealing with all the time."

A priest of the Archdiocese of Newark, New Jersey, Father Fichter explained the results of a 2016 survey of active and retired U.S. bishops in a talk at St. Mary's University of Minnesota's Minneapolis campus Jan. 15. The survey was the first to look at the lives of bishops since 1989.

The study is the subject of a 2019 book published by Oxford University Press, "Catholic Bishops in the United States: Church Leadership in the Third Millennium." Father Fichter is one of four co-authors of the book. An exclusive excerpt from the book was published in America in November 2018.

The researchers wanted to carry out a comprehensive study, develop a profile of bishops and chronicle the experiences of prelates in their ministerial roles, Father Fichter said.

The average age of active bishop respondents was 66. They are white and theologically moderate or traditional. Some bishops described themselves as moderately progressive.

Of 429 surveys sent, 213 recipients responded. They included bishops ministering in the Latin and Eastern rites. Respondents included bishops who head a diocese or archdiocese; auxiliary bishops; and retired bishops.

The survey, Father Fichter said, revealed demographic changes among the bishops. Of the 126 Latin-rite bishops heading archdioceses or dioceses who responded, 97% were born in the United States. Meanwhile, 76% of the 33 Latin-rite auxiliary bishops who responded were U.S. born. (Because of the foreign-based nature of their churches, Eastern-rite bishops are more likely to be born outside of the U.S. than those in the Latin church.)

The average workday for respondents was 9.8 hours. On average, bishops sleep 6.5 hours per night -- 2.1 fewer hours than the average male their age, Father Fichter said. Bishops spend an average of 108 minutes per day in prayer.

Overall, 97% are either somewhat or strongly satisfied with their life as a bishop, Father Fichter said. Bishops find most satisfaction in the sacraments and liturgy, sharing the Gospel and working with people. Their greatest hopes are in youth and laity.

Topping their list of concerns and challenges are limited number of available priests, difficulty reaching people, secularism and religious freedom.

Respondents were not asked about the clergy sexual abuse crisis, Father Fichter explained, because the survey was conducted before the issue arose again with the start in 2016 of a months-long Pennsylvania grand jury investigation into alleged clergy abuse and supposed cover-up by church officials in six Pennsylvania dioceses, Father Fichter explained.

The lecture was part of the university's Cardinal Virtues presentation series, which aims to foster conversations around faith, culture and how they come together, Father James Burns, the school's president, said prior to Father Fichter's talk.

"We hear a lot about what laity and more recently clergy have faced, but we haven't had this in-depth look at bishops," he said. "I think it's helpful for the general population but also Catholics to understand who their bishops are."

Berhanu Belete, 48, attended the program to learn about the research methodology. Belete, who is completing a doctorate in business management at the university, said he sees similarities between Catholic bishops and the leadership of the Ethiopian Orthodox Church, to which he belongs.

Aleksandra Denisora, 37, a St. Mary's adjunct faculty member, said she attended to learn more about what the Catholic community beyond the university as well as what the bishops are thinking. She said she was surprised by the bishop respondents' average age.

"Bishops just coming into their position at 66, how long are they able to work without being tired and working to the full capacity?" she asked.

The survey and the book offer a realistic snapshot of contemporary bishops, Father Fichter told The Catholic Spirit, newspaper of the Archdiocese of St. Paul and Minneapolis, after his talk.

Show Comments ()
Comments are automatically closed two weeks after an article's initial publication. See our comments policy for more.
Provide feedback on this article
Join the conversation: Login or create an account
Before you can comment, you need to update your profile to include your first and last name, as required in our comments policy. Then reload this page and you'll be set up for commenting. Update your profile
Advertisement
More: Bishops / US Church