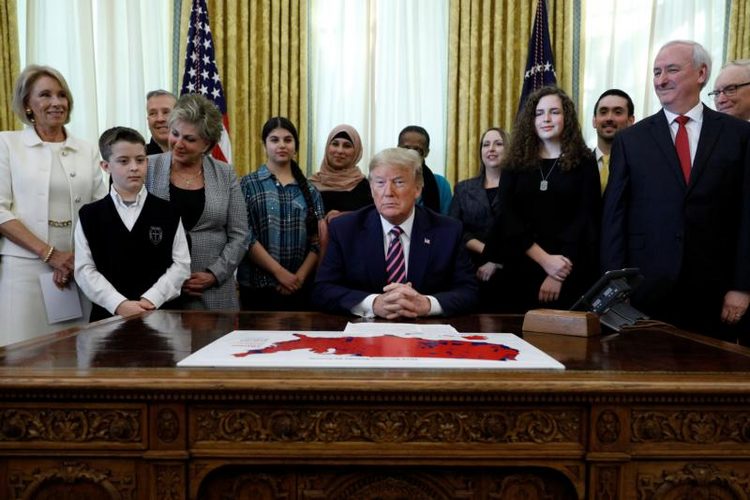 U.S. President Donald Trump attends an event in the Oval Office of the White House to announce his administration's new guidance on prayer in public schools on National Religious Freedom Day Jan. 16, 2020. At left is William McLeod, a student at a public school in Utah. (CNS photo/Tom Brenner, Reuters)

Primarily, it will require states to report cases where public school students have been denied their right to pray.

Ahead of the event -- which was delayed from a 2 p.m. (EST) start to about 4 p.m. -- material on the guidance was provided to reporters in a background briefing the morning of Jan. 16.

In a separate proposed rule, the administration aims to protect the rights of religious student groups at public universities, giving them equal treatment with secular student groups.

For schools to receive federal funding, they will need to certify once a year with state education departments that they do not have policies in place that would prevent students from constitutionally protected prayer, a senior administration official said.

State departments of education also would have to report to the U.S. Department of Education each year with a list of local school boards that failed to make the required certification as well as complaints made to that department about a local school board or school that has been accused of denying students or teachers their right to engage in constitutionally protected prayer.

The new guidance also stipulates that state education offices provide a clear process for people to report complaints about school boards or schools that have denied students or teachers their right to prayer which will in turn be sent to the federal Education Department. Similarly, state education offices will need to report to the Education Department any lawsuits against a local school or school board concerning rights to pray.

No matter how you pray, God wants to meet you
James Martin, S.J.

Why true prayer is a humbling experience
Terrance Klein

At an evening event marking National Religious Freedom Day, Jennie Bradley Lichter, deputy assistant to the president for domestic policy, said the guidance was important because "you don't lose your constitutional rights when you walk in a public school."

She said the event included students -- Muslims, Jewish, evangelical and Catholic -- who had been punished for something related to religion.

One of the students, William McLeod, a Catholic at a public school in Utah, told those at the ceremony: "So it all started when I walked in the classroom. ... It was Ash Wednesday, and I had my ashes on my forehead, and all the kids in the classroom was like, 'Is that dirt on your forehead?' Because they don’t know, because they aren't Catholic and they were all Mormon."

"So then the teacher came up and was like, 'It’s unacceptable. Wipe it off.' And I told her four times, and she didn’t listen and she made me wipe it off in front of all the kids."

William told the president: "I just don’t want anyone to feel like that."

Trump mentioned school prayer in his Jan. 3 address to evangelicals in Miami where he praised an effort in Tennessee to expand school prayer. Last November, the American Civil Liberties Union filed a lawsuit against a school district saying it sponsored prayer assemblies and the distribution of Bibles.

"I will be taking action to safeguard students' and teachers' First Amendment rights to pray in their schools," Trump told the Florida gathering.

The Supreme Court has taken up the issue of school prayer multiple times. In the 1960s, it said that school-sponsored prayer violates the Establishment Clause of the First Amendment but that students are permitted to pray alone or in groups at school if other students weren't compelled to participate.

In 1992, the court ruled against prayer at graduations and eight years later it said prayers said on a public address system at school games also violated the Establishment Clause.

Show Comments ()
Comments are automatically closed two weeks after an article's initial publication. See our comments policy for more.
Provide feedback on this article
Join the conversation: Login or create an account
Before you can comment, you need to update your profile to include your first and last name, as required in our comments policy. Then reload this page and you'll be set up for commenting. Update your profile
More: Education / Higher Education / Donald Trump