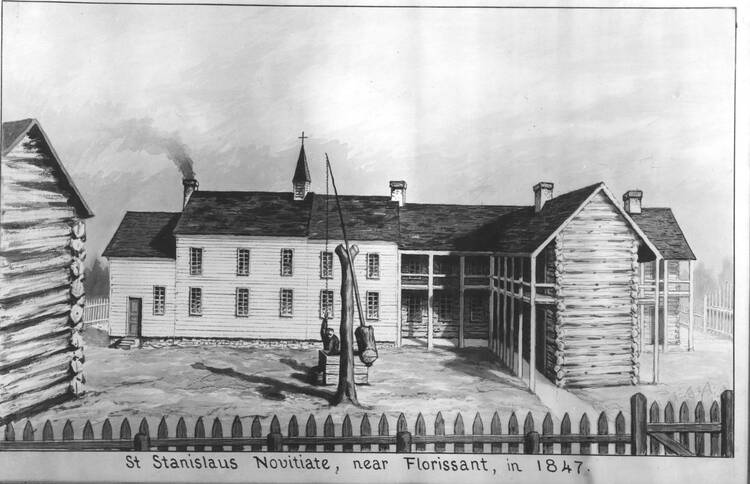 Enslaved people lived in the crowded log cabin in the left foreground of this picture. They built the white frame building, which served as the St. Regis Indian School in the 19th century, and later as a chapel for the enslaved. (SHMR)

Awareness of the Catholic Church’s—and the Jesuits’— role in slavery in the United States has grown in recent years thanks to reporting and research from journalists, univerisities and descendents. But there is still much that remains unknown about the enslaved people owned, rented and borrowed by the Catholic Church: How many of them were there? Who are their descendents? What were their day-to-day lives like?

The Slavery, History, Memory, and Reconciliation Project, a collaboration between the Jesuit Conference of Canada and the United States and St. Louis University, is working to uncover the untold stories of enslaved peoples. We talk with Jonathan Smith and Laura Weis from the project about what they’ve learned so far and what they hope to achieve.

In Signs of the Times, we break down the controversy surrounding Cardinal Robert Sarah’s new book on celibacy and what Pope Benedict’s role is in it. We also look at how Catholic bishops are advocating for refugee resettlement on the state level and a new marriage prep program in Spain.

Thoughts on the show? Join the discussion with other Jesuitical listeners in our Facebook group. Also, thank you to everyone who has responded so far for our call for new Patreon supporters. We can’t do it without your support.

The Chilton, as recommended by listener Isaiah Lucio Lopez.