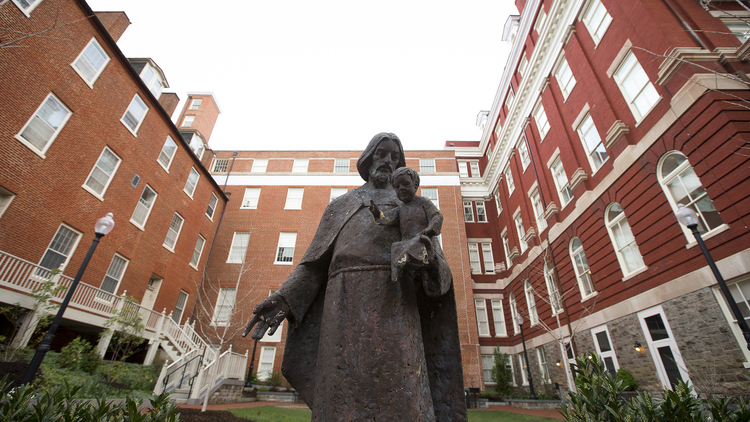 Mulledy Hall, also known as Freedom Hall, center, is seen on the campus of Georgetown University. The building will be renamed after Isaac Hawkins, the first enslaved person listed in the Jesuit university's documents on its selling of slaves. (CNS photo/Tyler Orsburn)

Onita Estes-Hicks has been Catholic her entire life. Men in her family were named “Nace” after St. Ignatius, a testament to the influence of the Jesuits in her family’s life. But her relationship with her faith was forever changed in 2004, when her family discovered that they were the descendents of one of the 272 enslaved persons sold by the Jesuits who ran Georgetown University in 1838.

We talk to Onita about what it was like to find out about her family’s history, what Georgetown has done to ask for forgiveness and what it’s been like to form a community of other descendants.

In Signs of the Times we unpack the latest developments from the case of former cardinal Theodore McCarrick (for a fuller discussion, listen to this week’s episode of Inside the Vatican) and discuss the new Archbishop of Washington, D.C. In our new segment, “Being Frank,” we talk about the pope’s advice to young travelers to focus on encounter, not consumerism (or Instagram likes).

I have been especially moved by the actions of Georgetown University students who voted in favor of paying reparations to the descendants of enslaved human beings sold by the Jesuit founders. This remains a thorny issue, to be sure, but I am persuaded that this moral issue is one that the University must now be prepared to engage.

I think the steps that have been taken by the Georgetown students are far and above what America as a whole has done to try to deal with the issues of the ugly past of slavery. I hope their actions sets an example for the rest of not only universities and Places of higher learning but for the United States as a whole, representatives in DC, and to general society at large. As a person who has been married to one of the descendants of GU272, I realize the importance of recognition And moving toward reparations for these atrocities.