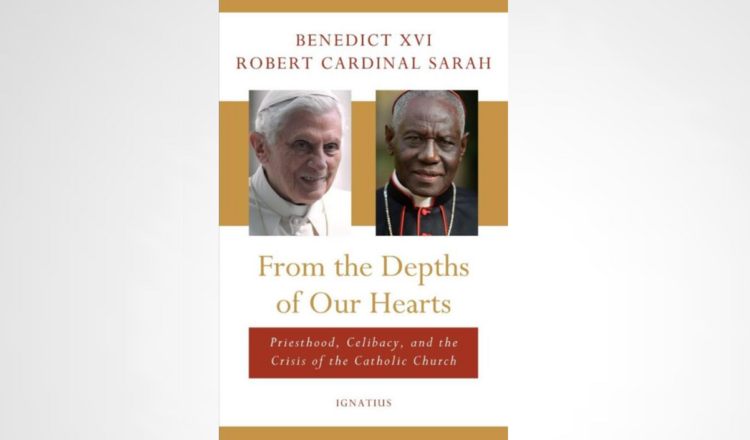 This is the cover of "From the Depths of Our Hearts," by retired Pope Benedict XVI and Cardinal Robert Sarah, prefect of the Congregation for Divine Worship and the Sacraments. (CNS photo/Ignatius Press)

Pope Emeritus Benedict XVI did not co-author the book Des profondeurs de nos coeurs (From the Depths of Our Hearts) with Cardinal Robert Sarah, and this morning asked the Guinean cardinal to have his name removed as co-author, Archbishop Georg Gänswein, his personal secretary, told the Italian news agency ANSA, after midday on Jan. 14.

“I can confirm that this morning, at the instruction of the emeritus pope, I asked Cardinal Robert Sarah to contact the editors of the book requesting that they remove the name of Benedict XVI as co-author of that same book, and also to remove his signature from the introduction and conclusion [to it],” stated Archbishop Gänswein, who is also the prefect of the papal household.

He said: “The emeritus pope in fact knew that the cardinal was preparing a book and had sent a brief text on the priesthood authorizing him to make whatever use he wanted of it. But he did not approve any project for a book under the two names, nor had he seen or authorized the cover.”

Benedict XVI did not co-author the book From the Depths of Our Hearts with Cardinal Robert Sarah, and this morning asked to have his name removed as co-author, said Archbishop Georg Gänswein.

Archbishop Gänswein concluded, “It was a question of misunderstanding, without casting doubt on the good faith of Cardinal Sarah.”

The German archbishop and secretary of Benedict XVI issued this statement to ANSA and KNA, the German Catholic news agency, after speaking with Cardinal Sarah earlier in the day.

He did so after Cardinal Sarah issued a statement around noon in which he stated explicitly that Benedict XVI was fully aware of the publication and that he had given the emeritus pope “the full text”—the chapters, the introduction and conclusion—as well as “the cover” of the book and received his approval.

“Considering the polemics provoked by the publication of the book, ‘From the Depths of Our Hearts,’ it has been decided that the author of the book for future editions will be Cardinal Sarah, with the contribution of Benedict XVI,” Cardinal Sarah tweeted on Jan. 14. “However,” he said, “the full text remains absolutely unchanged.”

The tweeted announcement came only a few hours after Cardinal Sarah had issued a formal statement accusing people of slandering him by saying that while Pope Benedict may have contributed notes or an essay to the book, he was not co-author of it.

This news is an extraordinary development around a book on the priesthood and celibacy, in which the authors firmly oppose the ordination of married men, and which stunned people in the Vatican when news of its publication was released. The authors were widely perceived as seeking to pressure Pope Francis.

He has been considering the request by the fathers of last October’s Pan-Amazonian synod to allow the ordination of mature married men in areas where Catholics are unable to receive the Eucharist for months or even years because of the shortage of priests. Francis, who has made clear he does not intend the change the law of celibacy, is expected to give a response to that recommendation in his exhortation on the Amazonian synod, which sources say will be released by mid-February.

Archbishop Gänswein concluded, “It was a question of misunderstanding, without casting doubt on the good faith of Cardinal Sarah.”

When news about the book was first broken by Le Figaro, the oldest French daily, on Jan. 13, many in Rome questioned why Benedict XVI had opted to make his position public in a book when he has every possibility to make it known to Francis personally since the two live close to each other in the Vatican. One senior Vatican official, who asked not to be named, told America he was “alarmed” when he learned of the book’s publication.

Benedict, who will be 93 in April and is very frail, can hardly write because of physical difficulties or hold a conversation for more than 15 minutes and moves about in a wheelchair, according to a Vatican source, never understood that he was being involved in co-authoring a book with the 74-year-old Guinean cardinal, who is the prefect of the Congregation for Divine Worship and the Discipline of the Sacraments and who has on several occasions shown that he does not agree with Pope Francis on a number of questions.

“Benedict XVI has not co-authored a book with Sarah. He had not seen nor approved the cover [of the book], nor did he approve the fact that the book would be published as a volume written by four hands” (that is, co-authored), a source close to Benedict who requested anonymity because he had not been authorized to make a public statement told America on Jan. 13, making clear that this information came from the emeritus pope.

One senior Vatican official, who asked not to be named, told America he was “alarmed” when he learned of the book’s publication.

Cardinal Sarah refers explicitly to this text of around 20 pages in tweets on Jan. 13 and Jan. 14, in response to the news stories that questioned the co-authorship of the book. He published the tweets with copies of three letters from Benedict XVI to him regarding this text, which is the only part of the book that Benedict has written. As the letters show clearly, the emeritus pope gave the cardinal the right to use that text in whatever way he wished.

This text is now a chapter of the book and the only part of the book written by Benedict. Cardinal Sarah wrote both the introduction and conclusion and showed it to Benedict who agreed with the contents, but the source made clear to America on Jan. 13 that Benedict never realized that he was being presented as co-author of the book, which will be published in France on Jan. 15 and in the United States in February.

“It is evident that there is an editorial and mediatic operation from which Benedict XVI separates himself, and to which he is totally extraneous,” a source close to Benedict stated.

“It is evident that there is an editorial and mediatic operation from which Benedict XVI separates himself, and to which he is totally extraneous,” the source close to Benedict stated.

America has written to both Archbishop Gänswein and Cardinal Sarah but so far has not received a reply from either.

According to The Associated Press, Ignatius Press, the U.S. publisher of the book, which has been Benedict's English-language publisher since before he became pope, has defended the book and Benedict’s participation in it.

Joseph Fessio, S.J., Ignatius' founder and editor, said he had read the text in French and English, and said only Benedict could have written it.

“Is it really believable that Sarah would perpetrate a fraud?" Fessio asked in an email to The Associated Press. “Or alter something from Benedict? Or claim that Benedict didn't collaborate and agree to the intro and epilogue?”

Material from The Associated Press and Catholic News Service was used in this report.