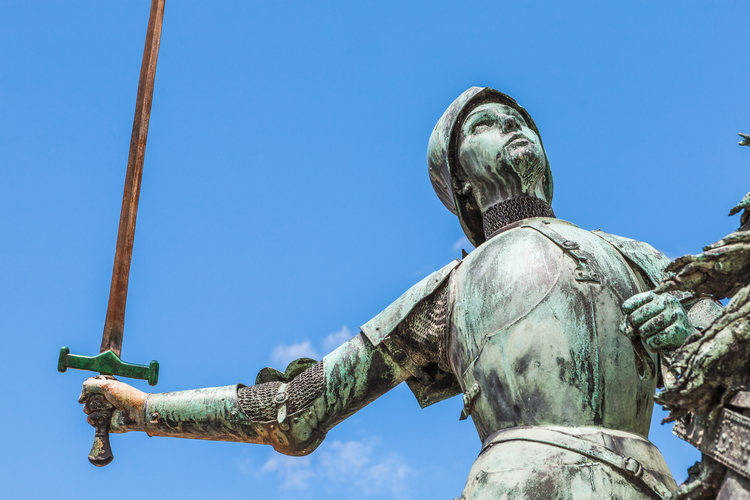 A bronze statue of Joan of Arc in the public space outside Reims Cathedral in France. (iStock/lucentius)

This year is the 100th anniversary of the canonization of Joan of Arc, the 15th-century French warrior and teenage martyr. Celebrations will be held in Orléans, the site of Joan’s first victory against the English in 1429; in Rouen, where she was burned at the stake two years later; and in New Orleans, where a new production of Tchaikovsky’s opera about St. Joan will be staged in February.

Amid the joyful festivities, Joan’s admirers should adopt their own sacred mission: They must denounce the far-right nationalists and white supremacists who have used Joan as a symbol for their hateful agenda. France’s right-wing National Rally party, formerly known as National Front, has sullied the saint’s memory for decades, using her image to promote the party’s anti-immigrant, anti-Muslim platform. In 2018, Twitter trolls on both sides of the Atlantic mocked the choice of a mixed-race teenage girl to play Joan in the city of Orléans’s annual pageant.

The exploitation of Joan of Arc has a long history. In the 1890s Parisian anti-Semites gathered around a statue of Joan to rail against Alfred Dreyfus, the Jewish artillery officer falsely accused of treason by the French army. A half-century later, the Nazi puppet government of Vichy France put Joan’s image on posters portraying her as an enemy of the Jews and an ally of Vichy leader Philippe Pétain.

In the United States, commentators such as the National Review editor Rich Lowry have cited the example of Joan to defend the idea of nationalism, with Mr. Lowry adding, “It’s based not on hatred, but on love—on our affection for home and our own people.” But even this interpretation simplifies Joan’s story and overlooks the importance of her religious faith.

Her battles were part of the Hundred Years’ War, which was a long conflict between French and English rulers—whose bloodlines were tangled by countless strategic marriages—over the right to the French throne. It was a civil war, too: In 1420, the Duke of Burgundy turned against Charles VII, the French claimant to the throne, and sided with the English. Joan, an illiterate shepherdess, came from the war-torn Lorraine region, but she had no doubt about her own allegiance. She said God had commanded her, using the voices of Sts. Catherine, Margaret and Michael, to crown Charles VII and lead his army to victory.

The story of how Joan carried out her mission still boggles the mind. A 17-year-old girl, with no military training, leading men into battle? During the Middle Ages? And defeating every army sent against her? It is inspiring to the point of incredulity, but it is wrong to call it a triumph of nationalism, which had not yet emerged in its modern form. In spirit, Joan’s campaign was closer to the Crusades. She fought for Charles VII because her voices had proclaimed him the true heir to the throne. What is more, she made it clear that this divine favor could be withdrawn. If the French soldiers acted sinfully, she warned, they would fail to drive out the English.

Joan was not a modern-day, flag-waving nationalist. The phrase “my country, right or wrong” would have been anathema to her.

This mindset was typical of the late medieval period, when military victories and defeats were commonly seen as signs of God’s approval or anger. Needless to say, Joan’s beliefs were very different from those of a modern-day, flag-waving nationalist. The phrase “my country, right or wrong” would have been anathema to her.

Joan’s piety was at her core, and it was the source of her charisma and courage. Unfortunately, this characteristic has also been exploited by far-right demagogues such as Marine Le Pen, the head of the National Rally party. Every year her party organizes a march in Paris that ends at a statue of Joan of Arc, whom Ms. Le Pen has extolled as a paragon of France’s Christian identity. But in her 2017 presidential campaign, Ms. Le Pen said that Muslim expressions of piety, like the head scarves worn by Muslim women, were threats to French culture.

The dishonesty of this tactic is clear to anyone familiar with the latter part of Joan’s story, after she was captured in battle and put on trial by French churchmen working hand in hand with the English. The clerics tried to prove that Joan was a witch, but they were thwarted by her devout responses to their interrogation. They finally sentenced her to death for wearing men’s clothing while in prison, even though it was her only defense against sexual assault by her guards. Defiant to the end, Joan rejected the clerics’ authority: “I believe indeed in the church on earth; but for my words and deeds, as I have already declared, I trust in and refer me to God.”

In other words, Joan of Arc was not a blind follower of either her church or her country. She relied on her heavenly voices for guidance. They told her to have compassion for her enemies: She always tried to negotiate a peace before going into battle, and afterward she always wept over the dead. After the Battle of Patay, she held a dying English soldier’s head in her lap and heard his last confession.

Did Joan’s voices really come from God? Or from her conscience, her innocent, forthright sense of right and wrong? The answer may always remain a mystery, but Joan’s story is miraculous whether or not you believe in God. To believers, she is a saint; to nonbelievers, she is a superb example of human ingenuity and determination. That makes it all the more important to wrest Joan of Arc from the hatemongers and reclaim her for everyone else.

Show Comments ()
Comments are automatically closed two weeks after an article's initial publication. See our comments policy for more.
Show Comments ()
Join the conversation: Login or create an account
Before you can comment, you need to update your profile to include your first and last name, as required in our comments policy. Then reload this page and you'll be set up for commenting. Update your profile
More: Saints / Europe 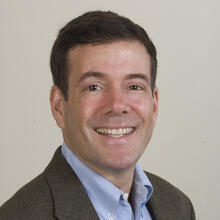 Mark Alpert, a contributing editor at Scientific American, is the author of the novel Saint Joan of New York.