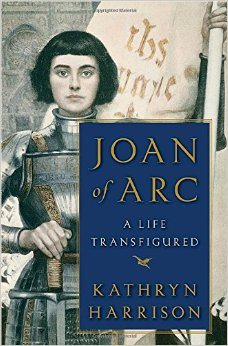 Kathryn Harrison’s new biography Joan of Arc (2014) is 320 pages long. She uses the word “voice,” or its plural, 150 times. Hard not to, when Joan’s own understanding of her life, and of what God wanted of her, was entirely determined by those voices. That was the issue at her trial by church authorities, albeit under English domination: the origin of her voices. She was burned at the stake, only to have the same church, some 500 years later, solemnly declare her a saint of God.

Harrison writes, “The judges to whom we commend Joan today are doctors of medicine rather than the Church. Her voices have inspired retroactive diagnoses of hysteria, schizophrenia, epilepsy, even tuberculosis” (36). It’s a great biography, but Harrison is wrong on this point. The psycho-physiological causes of Joan’s voices, if they were extraordinary, tell us nothing about God’s action in her life. Why? Because God, being God, would have been perfectly free to act either through extraordinary revelations or through psychological malady.

God is at work on what can be called both the natural and the supernatural levels. So what modern physicians might determine about the psychological health of a saint tells us nothing about the God who normally guides, but sometimes supersedes, the natural order. God has accomplished great things through saints who were physically very ill but who none-the-less responded to grace. God can equally well work through the mentally disturbed.

The truth of personal revelation is not ascertained by the characteristics of its manifestation. The living God can be revealed through something as subtle as an intuition, and, as Saint Ignatius of Loyola would later note, the evil spirit can masquerade as an angel of light.

Yet in scrutinizing the sources, Harrison retrieves a piece of Joan’s story that is more telling, more helpful to us, and directly related to the voice of the Good Shepherd, which Jesus promised to be, for Joan and for us.

The local sacristan, Perrin Drappier, remembered that Joan scolded him when he failed to ring the bell for Mass or evening prayers, and when that didn’t work, she bribed him, promising him the reward of “galettes,” or cakes—the kind Little Red Cap carried in her basket—if he would only fulfill his duties dependably. Jean Waterin, a childhood friend with whom Joan drove her father’s plow, remarked that she “used to go down on her knees every time she heard the bell tolled” and often slipped away to “speak with God.” A different Jean, the Count of Dunois, who would become one of Joan’s comrades-in-arms remarked that even at the frantic height of her military career “it was her habit every day, at Vesper time or at dusk, to retire into a church and have the bells rung for almost half an hour.” Watching her pray, Dunois saw a woman “seized with a marvelous rapture,” a description far more revealing than any Joan would give (34-35).

Joan of Arc doesn’t provide us instruction on how to recognize the voice of the shepherd. She does something much more valuable. She teaches us to listen for it, to expect and reverence it. That lesson stands at the core of discipleship. Do we truly believe that, in faith, we encounter the presence, the voice of another, one who is not us, one who stands beyond us, one before whom we can only submit in humble reverence? Joan knew that she had encountered the living God. She lived her short life responding to a person, not a project.

When faith is weak, it begins to turn God into an object, something about which we naturally have an insight, an opinion, a preference. The temptation is there for all of us: the “liberal” who speaks of Pope Francis and “the future of the Church,” as though his own political party has come in from the cold; the “conservative” who selectively quotes papal teaching like a fundamentalist citing scripture. The question isn't the rightness of opinion; it’s the intensity of the reverence. Do we truly believe that in Sacred Scripture, in the church, in Christ, we have encountered the God to whom we must submit because we have been submerged, addressed by a reality more real than we ourselves? Joan did.

The objections are long but limp: but, scholars assure us, Scripture is a very human creation; but, historians can remind us, the church has always been political and full of prejudice. Of course Scripture and the church are worldly. They are Christ speaking to the world! We must still respond with reverence because in them we encounter the person of Christ.

We profess that in Holy Communion we receive the Body and Blood of Our Lord Jesus Christ. There is nothing reasonable about that assertion. When it begins to sound reasonable, we should fear that faith is faltering. The voice of the one who is not us, but who none-the-less enters our lives and addresses has grown weak. The Good Shepherd cannot be heard because our lives are wearily consuming themselves. One sees Christ “in the breaking of the bread” though the gift of faith. Praestet fides supplementum sensuum defectui. In the words of Saint Thomas Aquinas, “Faith for all defects supplying, where the feeble senses fail.”

The paradox of faith—and true faith is paradoxical—is that young Joan of Arc could both arrange for the ringing of church bells and drop to her knees when she heard them. We do not know how her voice entered the world, only the effect it has had upon the world. Faith discerns the fruit.

If one has never heard the Shepherd speak, or if the voice has grown dim, it is all a matter of opinion, of prejudice and preference. But when one hears the voice of the other, one opens, submits, as our Muslim friends would say, or, better, one is submerged in something other than the self. Like her Jesus, Joan was a martyr. Neither could deny the voice they heard.

Show Comments (
2
)
Comments are automatically closed two weeks after an article's initial publication. See our comments policy for more.
DAVID LUKENBILL MR
5 years 1 month ago
Beautiful review about a magnificent saint. I ordered the book halfway through.
Bruce Snowden
5 years 1 month ago
Regarding the voices of St. Joan of Arc, I agree entirely with Father Klein that because “God, being God, would have been perfectly free to act either through extraordinary revelations, or through psychological malady.” Has there ever been anyone on this Earth totally devoid of some degree of psychological malfunction? I can think of only two exceptions – Jesus Christ, Son of God and Mary, Mother of God. But the rest of us? The rest of us are often “driven” by our “voices” sometimes call “passions” or “convictions” into actions, or inactions, or by the call of the “spirit” within the pages of that book being read, or maybe by that “voice” electronically delivered in some form, productive of sin, or virtue, of right, or wrong, or even by the voice of the Spirit of God heard in Scripture. Yes, Joan may have had her own personal psychological promptings generated by malady, but used by God to achieve goodness, verifiable in her life. In a way me too, driven by spirit, or "voices" within, "first movements" as Aquinas might say, relative to something called “Fallen Nature” through which I learned what not to do by having done it! God works with the “stuff” at hand, the “stuff” as he allowed nature to follow malproductively its sometimes twisted lines, showing again and again, God can write straight on crooked lines. The Blessed soul, St. Joan of Arc, a probable example. Yes, as Father Klein insightfully writes (always!) I’ve often maintained too, with some veracity, that God does work not only extraordinarily, that is miraculously, but also in malady, naturally, showing that for God whatever is possible naturally, even when malformed, is also possible supernaturally, that is, by God’s extraordinary intention, according to the perfection of His Being. “No!” some may say, “You’re psychologically bent out of shape!” O.K. Now tell me something I don’t know and while you’re at it, may I respectfully ask, how about you? Do you have your "voices?" ordinary, or extraordinary, perhaps even psychological malady? Let me add in emphasis, we are all "damaged goods" everyone of us, cracked or broken vessels of clay, needing repair with the "Gorilla Glue" of God's merciful love!
Advertisement