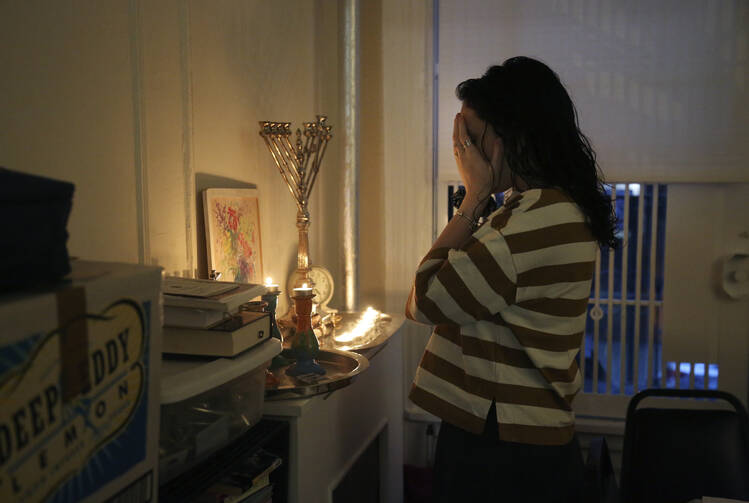 In this Friday, Jan. 3, 2020, photo, Chana Blum, 14, recites a blessing after lighting candles for Shabbat dinner in her family's home in New York. Two days later, Blum joined her older sister at the "No Hate, No Fear" solidarity march organized by New York's Jewish community in response to the recent string in anti-Semitic attacks. (AP Photo/Jessie Wardarski)

NEW YORK (AP) — When a man spewed anti-Semitic slurs and spat on her face, Shoshana Blum remembered her ancestors who survived the Holocaust, and instead of looking down - she defiantly stared at him eye to eye.

The 20-year-old junior at City College of New York left the subway in tears. But months after the attack, she continues to wear proudly the same Star of David necklace she wore that day, and on Sunday, she joined thousands of people in a solidarity march against a rise in anti-Semitism and acts of hate.

"It's important to stand strong in my Judaism," she said. "If this is what's happening when we're out being proud Jewish people, what's it going to be like if we're afraid and in hiding?"

Many young Jewish people in the United States say their generation never experienced this level of threat and are searching for ways to cope with an alarming string of recent anti-Semitic attacks across the country.

The "No Hate, No Fear" march on Sunday organized by New York's Jewish community came as a response to anti-Semitic violence, including the targeting of a kosher grocery in Jersey City, New Jersey, and a knife attack that injured five people at a Hanukkah celebration north of New York City.

"It's terrifying. We thought that anti-Semitism was a thing of the past. We learned about it but never thought we would live in it," said Rabbi Jon Leener, 31, who runs Base BKLYN, a home-based ministry that aims to reach out to millennials and Jews of all backgrounds. He attended Sunday's solidarity march and published a photo with his three-year-old son on his shoulders. They held a banner that read: "I love being Jewish because I love Shabbat."

"The idea that someone wants to hurt you, your family, your community just because you're Jewish is still hard to fully comprehend," he said.

In the past five years, Leener and his wife, Faith, have welcomed thousands of people into their home-based ministry rooted in openness. Minutes before a class or a Shabbat dinner, he always walked to the front door and unlocked it because the couple believes in a Judaism where no door is shut or locked, both literally and metaphorically.

"This is all changing now. After Pittsburgh, after Poway, after Halle (Germany), after Jersey City, after Monsey we no longer keep the door unlock(ed)," he recently said on Facebook.

Visitors now must buzz in and Leener installed a security camera for the front door.

"I'm angry that this is our new reality. I hate that anti-Semitism is changing how I practice and share my Judaism to the world," he said.

Anti-Semitic attacks rose worldwide by 13% in 2018 compared to the previous year, according to a report by Tel Aviv University's Kantor Center for the Study of Contemporary Jewry. The report recorded nearly 400 cases worldwide, with more than a quarter of the major violent cases taking place in the U.S.

The surge of fatal attacks on the Jewish community, including shooting rampages at the Tree of Life synagogue in Pittsburgh in October 2018, and at a synagogue in Poway, California, in April, have caused consternation nationwide.

"After the stabbing in Monsey, I told my mom, 'This is crazy. He was arrested less than a mile from here, while we were at Shul (synagogue) and celebrating Hanukkah,' " said Blum, who was raised in Chabad-Lubavitch, an Orthodox Jewish Hasidic movement. "Jews are getting attacked. It's not far; it's not in Europe."

The first time that Blum witnessed hate against Jews she was seven. The victim was her father, Rabbi Yonah Blum, who was the head of Columbia University's Chabad House for 23 years. While they were walking hand-in hand from synagogue near the campus, a man came up behind him yelling anti-Semitic slurs and slapped his black fedora and his skullcap off his head.

"I think Jews, we're very separated people when it comes to different topics, and different nationalities, but something that has been coming up since the (Monsey) attack, is that we all stand together," she said on a recent Friday as she prepared dinner and later lit the candles and recited a blessing in Hebrew to mark the start of the Jewish Sabbath.

Since the Dec. 10 fatal shootings at a Jewish grocery store in Jersey City, there have been 33 anti-Semitic incidents in the U.S., including 26 in New York and New Jersey alone, according to the Anti-Defamation League's Tracker of Anti-Semitic Incidents. The tracker compiles recent cases of anti-Jewish vandalism, harassment and assault reported to or detected by the group.

During a recent trip to a conference of young Jewish leaders in New York City, Hezzy Segal's mother advised him against wearing the yarmulke while riding the subway. The 16-year-old from Minnetonka, Minnesota, said that he still wore the Jewish skullcap that symbolizes his devotion to God. But in some areas of the city, he tucked it under his purple Minnesota Vikings snow hat.

"I've never been scared of being Jewish, but with the rise in anti-Semitism, I was more aware of it," he said. "It's sad, it's scary for all Jews."

Forty-five percent of teenagers feel that anti-Semitism is a problem for today's teens, according to the largest study of Jewish teens conducted in North America. The Jewish Education Project's GenZ Now Research Report included 18,000 respondents and was published in March 2019.

"I've already been on my guard a lot," said Thando Mlauzi, 25, a UCLA junior, who is majoring in English.

"One of my hopes and dreams is that we live in a world, in a society, where it doesn't matter that I'm black and Jewish," said Mlauzi, who converted to Judaism in 2018.

On a recent Friday, Alexandra Cohen, 29, chopped tomatoes before guests arrived for a Shabbat dinner in her studio apartment decorated with menorahs and flags of Israel, as well as sepia photos of her grandparents next to a colorful painting of the beach in Tel Aviv.

Cohen said that her connection to Judaism grew stronger after someone put an anti-Semitic message on the door of her dorm at Johns Hopkins University, and later when she traveled to Israel and joined advocacy organizations. She said she is combating the negative environment by exposing the positive side of Jewish life and contemporary Jewish society.

The Anti-Defamation League has worked on initiatives, including its "No Place for Hate" anti-bias, anti-bullying initiative, which is in place in schools. Another includes working with juvenile offenders who are involved in some of the incidents to understand what they did and why.

Reformed neo-Nazi Shannon Foley Martinez is part of a U.S. movement that helps people quit hate organizations. She feels she must spread the message that people can change their lives. She hopes her story is a warning to parents.

"People have preconceived notions of who they think violent white supremacists are," said Martinez, who at 15 became a skinhead who spouted white supremacist rhetoric, gave stiff-armed Nazi salutes and tagged walls with swastikas.

"I grew up in a family with two middle-class parents who have been married for 51 years, I was one of the smartest kids in my class, I was a championship athlete at one point of my life. I don't fit what people's ideas are of who is vulnerable to radicalize into these ideas," she said.

"My story is important because of that. We have to look at ourselves and our children and think: 'This could be my child. Am I actively and intentionally taking steps to not find resonance and find resistance to hate?'"

Luis Andres Henao - Associated Press
Provide feedback on this article
Join the conversation: Login or create an account
Before you can comment, you need to update your profile to include your first and last name, as required in our comments policy. Then reload this page and you'll be set up for commenting. Update your profile
Show Comments ()
Comments are automatically closed two weeks after an article's initial publication. See our comments policy for more.