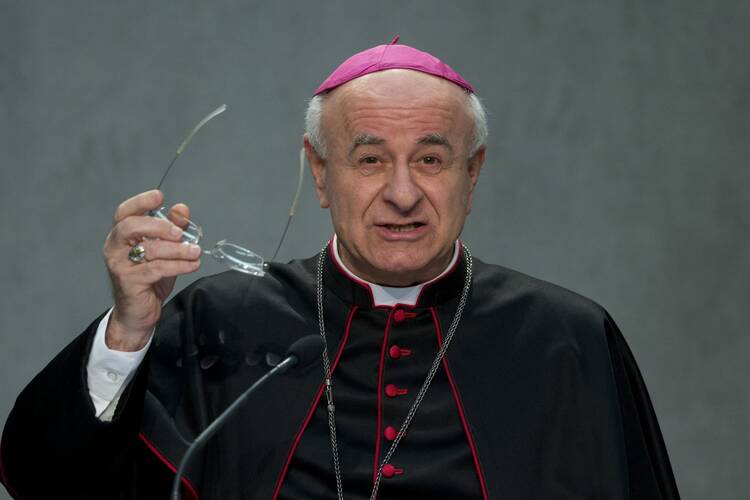 VATICAN CITY (RNS) — A top Vatican official's remark about assisted suicide, stoked by a perfect storm of media coverage, expert commentary and social media posts, has prompted the latest round in the ongoing culture wars that have been dividing the Catholic Church, with ideology taking precedence over reality.

At a press conference on Dec. 10, Italian Archbishop Vincenzo Paglia, who heads the prestigious Pontifical Academy for Life, was asked by a small group of reporters whether it was appropriate for a priest to accompany a person who had chosen to undergo assisted suicide.

The pretext for the question was a 30-page document released by the national bishops’ conference in Switzerland, where assisted suicide is legal. The document stated that any Catholic pastoral worker “has the duty to physically leave the patient's room during the suicide act.”

Paglia answered, “According to us, no one should be abandoned,” before immediately adding: “we are against assisted suicide because we don’t want to do death's dirty work.

But a review of an audio recording of the conference and a transcript of Paglia's remarks show that what he was after was something subtler than what the journalists present — and those who were not — reported.

“I believe that it’s a topic that goes beyond the laws,” Paglia said, “because in today’s individualistic society, we don’t need laws so much as we need a surcharge of love.”

According to the archbishop, suicide is “a great defeat” that requires “responsible accompaniment.” Most of all, he said, “suicide is a great request for love.”

When journalists battered Paglia for a more definitive quote, he answered: “I don’t want to give a rule; the choice is meant for who is present in that situation,” adding that his intention is “to eliminate ideology from these situations.”

Because its job is to address bioethical issues, from abortion to euthanasia, Paglia's Pontifical Academy for Life has experienced its fair share of controversy. Created by now Saint Pope John Paul II, the academy is meant to enlist qualified academics to assist the Catholic Church in the protection of human life and dignity.

In 2016, Pope Francis overhauled the membership and focus of the academy by appointing 45 new members to represent a more interreligious and global perspective. He also shifted the mission of the Vatican think tank to consider life issues beyond conception and end-of-life to tackle the impacts of migration, human genome editing and artificial intelligence.

The pope's move provoked backlash from those who saw it as a reduction of the church’s commitment to opposing abortion and euthanasia. Paglia, who is perceived as a strong papal ally, was made a target for these same critics. The dustup over Paglia's words should be taken in the context of the larger battle over the agency and its leadership.

In trying to squeeze as much political drama out of this background, news outlets missed what was perhaps the most interesting aspects of Paglia's answer, which flips the tables on how the Catholic Church has historically addressed end-of-life issues.

Paglia's refusal to insist on the uniform application of church law reflects the approach to complex issues that has taken hold under Francis.

“I seem to remember that I am a priest, not a judge,” said Don Tullio Proserpio, a chaplain at the National Institute for Tumors in Milan and a consultant for Paglia's agency.

“I seem to remember that I am a priest, not a judge.”

“A priest is called to accompany the person in any situation, including a situation that I obviously don’t agree with,” he said, adding that a priest would have to be specifically invited by the patient to accompany them for an assisted suicide — which doesn’t happen too often.

Proserpio works in a hospital that has a program dedicated to terminally ill children and adolescents. During an interview, his voice was still raw and cracking after hearing news that an 18-year-old man he cared for had died.

The media, he said, “keeps going at each other’s throats, while we are living life and death situations.” What most discussions regarding end-of-life situations are lacking, he said, is an understanding of the situation on the ground.

Such nuance contrasts sharply with the views of Dutch Cardinal Willem Eijk, a cardinal in a country where Catholicism has been slowly dying.

“The priest must not be present when euthanasia or assisted suicide are performed,” said Eijk in an interview with Catholic News Agency published Dec. 17.

“This way, the presence of the priest might suggest that the priest is backing the decision or even that euthanasia or assisted suicide are not morally illicit in some circumstances.”

Eijk, a former physician who works for the academy of life, exemplifies how a preeminently legalistic approach to church teaching struggles to adapt in the Francis era. Eijk has also spoken against Pope Francis cautiously opening in his Apostolic exhortation Amoris Letitae to communion to divorced or remarried couples.

Critics of pastoral involvement in assisted suicide point to research that questions the motivations behind the requests. In 2016, a small study by the journal of the American Medical Association conducted in the Netherlands, where euthanasia and assisted suicide have been legal since 2001, found a correlation between depression and seeking assisted suicide.

“I don’t have the solutions,” said Prosperio about the best way to minister to the dying or those wishing to commit suicide. “I don’t know what needs to happen.”

To remind him of how to treat the dying, Proserpio keeps in mind the Bible passage where Moses is asked by God to take off his sandals before the burning bush, because he is standing on holy ground. For him this holds true when approaching a person at their sickbed.

Four years ago, a young girl who was terminally ill told him she had lost her Catholic faith after her parish priest told her that her sickness had been given to her by God as a challenge.

Proserpio said he jokingly offered the young girl a fitting insult with which to respond. She answered that it was useless because she no longer spoke to priests. “But I am a priest,” he told her.

“I know,” she answered, “but you are here. You know what we go through.”

Proserpio accompanied the girl until her death two years ago.

To guide him as he accompanies the many sick who come to the hospital, he keeps an excerpt from a speech Pope Francis made to Brazil's bishops in July 2018 in his breviary as a constant reminder.

“It is important to devise and ensure a suitable formation," the pope said, "one which will provide persons able to step into the night without being overcome by the darkness and losing their bearings; able to listen to people’s dreams without being seduced and to share their disappointments without losing hope and becoming bitter; able to sympathize with the brokenness of others without losing their own strength and identity.”

Careful formation, Proserpio said, is essential for someone wishing to provide palliative care and accompaniment for very sick patients. While theological formation is of the utmost importance, the main characteristic for a chaplain is “to be profoundly human and humane,” he said.

“The Christian faith is profoundly human,” he added, “that’s something we often forget.”

Claire Giangravé - Religion News Service
@ClaireGiangrave
Show Comments ()
Join the conversation: Login or create an account
Before you can comment, you need to update your profile to include your first and last name, as required in our comments policy. Then reload this page and you'll be set up for commenting. Update your profile
Show Comments ()
Comments are automatically closed two weeks after an article's initial publication. See our comments policy for more.