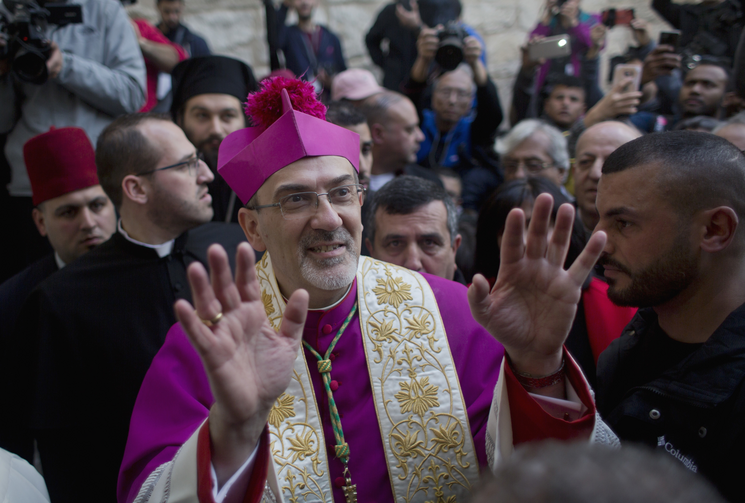 In this Dec. 24, 2018 file photo, Christians celebrate the arrival of Archbishop Pierbattista Pizzaballa, the top Roman Catholic cleric in the Holy Land, center, after he crossed an Israeli military checkpoint from Jerusalem ahead of midnight Mass at the Church of the Nativity. (AP Photo/Nasser Nasser, File)

Archbishop Pierbattista Pizzaballa said he wanted to bring some holiday cheer to Gaza's Christians because it remains unclear whether they will be able to travel to Bethlehem in the West Bank for the holiday. Israel has not said whether it will allow Gaza's Christians to exit the Hamas-ruled territory.

"Every year we have the same problem, the permits to go from Gaza to Bethlehem and vice versa. We know that Gaza is closed and we can't accept the situation," Pizzaballa said. "We will do all what is possible to change it, but meanwhile despite the situation -- we want celebrate."

In previous years, Israel has granted travel permits to large numbers of Gaza Christians to visit religious sites and spend time with family in Israel and the West Bank.

But this year, COGAT, the Israeli defense body responsible for Palestinian civilian affairs, said it has not yet decided whether to issue the permits en masse. COGAT said, however, it is considering individual permit requests. It also is allowing 100 Christians to travel abroad.

Gaza resident Reema Tarazi said she already has been turned down.

"We are here today to celebrate at the church because we couldn't go to Bethlehem," said she said. "We wished to go there to celebrate the birth of Jesus, but we couldn't."

About 1,000 Christians live in Gaza, a tiny fraction of the territory's 2 million people. Most are Greek Orthodox, with Catholics making up about a quarter of the small community.

While the ruling Islamic militant Hamas movement considers the Christians a protected minority, Christians have been targeted over the years by Islamic zealots. The Christian community has greatly dwindled since Hamas took power in 2007, with large numbers emigrating to flee conflict and difficult living conditions.

Israel and Egypt have maintained a tight blockade over Gaza since the Hamas takeover.

Show Comments ()
Comments are automatically closed two weeks after an article's initial publication. See our comments policy for more.
Provide feedback on this article
Join the conversation: Login or create an account
Before you can comment, you need to update your profile to include your first and last name, as required in our comments policy. Then reload this page and you'll be set up for commenting. Update your profile
Advertisement
More: Israel Palestine / Christmas / Vatican