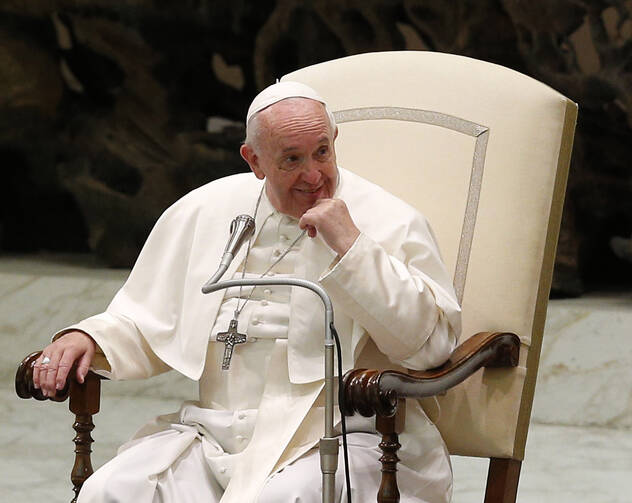 Pope Francis concluded his quiet celebration of the 50th anniversary of his priestly ordination by visiting the Jesuit Curia in Rome to present the writings of Father Miguel Angel Fiorito, the Argentine Jesuit known as “Maestro Fiorito,” who so influenced his life and ministry as a priest, bishop and pope.

Some 250 people, many of them Jesuits, together with a small number of cardinals and bishops and several lay people, applauded when Francis arrived, accompanied by the Father General of the Society of Jesus, Arturo Sosa, and by the pope’s nephew, José Luis Narvaja S.J., who has brought together Father Fiorito’s writings in five volumes.

Francis smiled broadly, with evident joy, when Father Sosa welcomed him once again “to your home” and thanked him for visiting on the 50th anniversary of his ordination as a priest in the Society of Jesus. The Jesuit leader recalled how over the past half-century as priest, bishop and now pope, Francis acquired “the style of listening” to the People of God and learned “to perceive the action of the Holy Spirit in human history.”

He thanked him for coming to present Father Fiorito’s writings, which show how God continues to give so many good things through the creative use of the Spiritual Exercises of St. Ignatius of Loyola that are still today “an inexhaustible well of spiritual freshness to which we continue to draw on.”

Then after listening to brief talks from his nephew, Father Narvaja, and the editor-in-chief of La Civilta’ Cattolica, Antonio Spadaro, S.J., who explained that Father Fiorito’s writings can be found on-line as well as in print, the first Jesuit pope took the microphone.

Francis then delivered an erudite and fascinating lecture, including off-the-cuff comments and much humor that revealed not only much about Father Fiorito but also about the Maestro’s influence on his own life and ministry.

Francis began by saying he had decided to present Father Fiorito’s writings in the Jesuit Curia as “a way to express my gratitude for all that the Society [of Jesus] has given me and done for me.” Moreover, he said, Father Fiorito stands for “the many Jesuits who have been my formators,” including especially “the many [Jesuit] brothers.”

He said he first came to know Father Fiorito in 1961 after returning from his Juniorate in Chile. At that time, he was a professor of metaphysics at the Colegio Massimo, the Jesuit house of formation on the outskirts of Buenos Aires, but he gradually began to dedicate himself totally to spirituality and the giving of the Spiritual Exercises.

“From then on, I began to confide in him, he became my spiritual director,” Francis stated. He described Fiorito as “a man who spoke little, but had a great capacity for listening, a listening [that is] capable of discernment, which is one of the pillars of dialogue.”

He noted that Father Fiorito “did little to make himself known,” but “as a good master he made known many good authors to his disciples.” He recalled that “he had us taste the best of the best, selecting texts and commenting on them in the Boletín de Espiritualidad of the Jesuit province of Argentina which he published every month.”

He said Father Fiorito saw himself as “a commentator” in the sense of “thinking together with the [other] author.”

“From then on, I began to confide in [Father Fiorito], he became my spiritual director,” Francis stated.

He said Fiorito was “a man always in search of the signs of the times, attentive to that which the Spirit says to the church for the good of people, through the voice of a great variety of authors, contemporary and classic. And the text that he commented on responded to the concerns—not only to those of the moment, but also the deeper ones—and awakened new, creative proposals.”

In a significant comment, Francis said, “the true master in the evangelical sense is content that his disciples also become masters, and in his turn always keeps his condition of disciple.” In this sense, he said he felt sure that Father Fiorito would be “very happy” that one of his disciples, Father Narvaja, has published his writings while another, Francis himself, presents them today.

He praised his nephew for the meticulous, caretaking year-long work he has done in preparing these writings for publication and expressed his conviction that Father Fiorito’s writings “will do great good for the whole church.”

In his talk, Francis recalled that he first mentioned Father Fiorito in public at a meeting with Jesuits in Myanmar and Bangladesh, when one young Jesuit there asked whom he would suggest as a model for them. He recalled that “Fiorito was a professor of philosophy, dean of the faculty but he loved spirituality, and he taught us students the spirituality of St. Ignatius. He taught us the way of discernment.”

He reminded his audience that “the Lord did not teach us alone, nor from a distant chair… He made a ‘school,’ he taught us surrounded by his disciples who in their turn become masters of others” and commented that Father Fiorito followed that same way.

For Argentinean Jesuits to read these texts, Francis said, “is to go back over our history, over seventy years of our family history,” and not just the history of “the immediate and particular” events, “but also the wider one of the universal church,” which Father Fiorito, like the German Jesuit Hugo Rahner who greatly influenced him, once referred to as “the meta-history of a spirituality.”

In his long talk, Francis recalled that Father Fiorito “made his own the perspective… from which John Henry Newman contemplated the church.”

He explained what he meant by quoting what the English saint, whom he recently canonized, had written on this subject: “The Catholic church never loses that which it possessed once upon a time… Rather she passes from one phase to another of life, she carries along her youthfulness and maturity into old age. The church has not changed what it possessed, but has accumulated and, according to the circumstances, draws out from her treasure things new and things old” (The Mission of Saint Benedict, 1903).

On a more personal level, Francis said two articles that Father Fiorito had written have left a lasting impact on his own life and ministry.

In his long talk, Francis recalled that Father Fiorito “made his own the perspective… from which John Henry Newman contemplated the church.”

The first was in 1961 or 1962 on “The Christocentrism of ‘The Principle and Foundation’ of Saint Ignatius.” He said it was there that he came to know “some authors that have accompanied me ever since”: Romano Guardini, Hugo Rahner with his book on the spirituality of St. Ignatius and Gaston Fessard with his “Dialectic of the Exercises.”

He recalled the major impact Hugo Rahner’s work had on Father Fiorito, and how it led him to devote himself completely to Ignatian spirituality. He noted that Rahner’s impact was not only on Fiorito but it also “marked a stage in the life of the [Jesuit] province in Argentina” and “it marked that which in my pontificate concerns spiritual discernment and accompaniment.”

Father Fiorito wrote a second article in 1975 on “Spiritual paternity and discretion” that greatly influenced him he said. It was the year when the 32nd General Congregation was held, and which he attended, where he listened to the last homily of Father Pedro Arrupe.

In that article, he said, Father Fiorito explained what “spiritual maternity and paternity” involves and emphasized that to achieve this one needs “two charisms: the discernment of spirits, or discretion, and to be able to communicate this with words in the spiritual conversion.”

Francis said he stated clearly that “the discernment of spirits” is not sufficient by itself, “it is necessary to be able to express the right and discrete ideas [in words], otherwise they are not of service to others.”

Pope Francis told his audience that he saw Father Fiorito for the last time on Aug. 9, 2005, in the German Hospital in Buenos Aires, but he could no longer speak. “He just looked and wept,” Francis remarked. “He had the gift of tears, which is an expression of spiritual consolation.”

Father Fiorito was “a master of dialogue,” Francis stated. He recalled that though Fiorito was never “master of novices,” he was nonetheless a master in the sense that he taught others “to be disciples” and to be able to transform those who heard them into “followers of Jesus” and “missionary disciples.”

Father Fiorito was “a master of dialogue,” Francis stated.

Father Fiorito firmly “believed in freedom,” Francis declared. He said this was particularly evident in his spiritual accompaniment of people: “He was a master of dialogue, and in the first place with listening…he allowed you to speak,” he “remained outside [the problem] … it was his way of giving space to listening, so that the person could say all he had inside in him, without interruptions or questions. He let you speak.”

Francis said this was a way of “gaining mastery over the conflicts,” of not getting involved and in this way “Fiorito was the great de-ideologizer of the province in an era of much ideologizing.” By de-ideologizing, “he awakened the passion for dialoging well, with oneself, with others and with God.”

Pope Francis concluded with some bullet-point comments. He recalled that Fiorito was “not much inclined to intervene in public, and in the community gatherings in which he participated, rather, he took notes, listening in silence.” And later, he would present his reflections in the Boletín de Espiritualidad.

Furthermore, he said, “Fiorito was not jealous” and “he did not give judgments, except rarely.” Francis ended his presentation by reminding his audience that “St. Ignatius was very patient” and said, “Fiorito imitated him.”