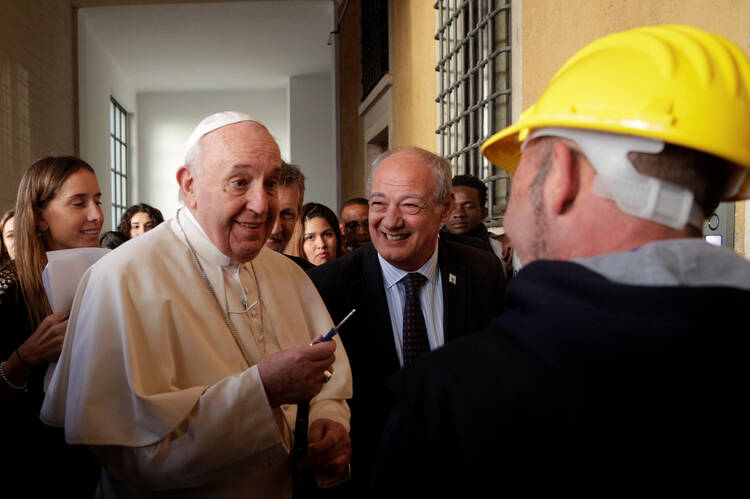 Pope Francis greets a worker as he inaugurates the new headquarters of Scholas Occurrentes, the Vatican's foundation that works to link technology and the arts for social integration and world peace, in Rome Dec.13, 2019. (CNS photo/Gregorio Borgia pool via Reuters)

Pope Francis today celebrated the 50th anniversary of his ordination to the priesthood without fanfare or ceremony. He started his day as usual with more than an hour of private prayer and then celebrated morning Mass in the chapel of Santa Marta, the Vatican guesthouse where he lives, concelebrating this time with some 60 cardinals.

After breakfast, he began his busy work schedule with private and group audiences, even as congratulations and good wishes arrived from across the globe.

He was ordained a priest 50 years ago on Dec. 13, 1969, by the emeritus archbishop of Cordoba, Ramón José Castellano, in the chapel of the Jesuit-run Colegio Maximo on the outskirts of Buenos Aires, four days before his 33rd birthday.

His entire family attended the ordination ceremony, with the exception of his father, Mario, who had from the beginning supported his son’s decision to become a priest but died before this happy day. Those present included his mother, Regina, his four siblings—Oscar Adrian, Alberto Horacio, Marta Regina and Maria Elena—and his beloved grandmother, Rosa.

At the end of the ceremony, his mother, who had been resistant to the idea of his becoming a priest—she had wanted him to become a doctor—sank to her knees and asked his blessing. His grandmother, who had supported his vocation and to whom he was very close, handed him a letter, half in Spanish and half in Italian, that she had written for this occasion, fearing that she might not live to see it. He has kept her letter in his breviary ever since.

On this 50th anniversary of his priesthood, Francis, who sees himself as “the world’s parish priest,” continued working as usual with a long series of audiences in the morning.

Last evening, Dec. 12, Francis celebrated Mass in St. Peter’s Basilica for the feast of Our Lady of Guadalupe, as he has done every year since his election as pope in 2013. At the end of Mass, Cardinal Marc Ouellet, president of the Pontifical Council for Latin America and prefect of the Congregation for Bishops, extended congratulations to Francis on the golden jubilee and said: “Not everyone understands the importance of your gestures and of your decisions, but let me assure you that the People of God that walk in faith feel encouraged by your example. Your priesthood is a gift for you and a gift for all.”

This morning, Dec. 13, L’Osservatore Romano, the Vatican daily newspaper, recalled the origins of Pope Francis’ vocation by publishing an excerpt from a radio interview then-Cardinal Bergoglio gave in Buenos Aires in 2012, in which he told the story of his call to the priesthood.

He recounted how he was attending an industrial school, studying chemistry, and was on the way to meet school friends on Sept. 21, 1953, the feast day of St. Matthew, when, as he walked past the San José de Flores Church in Buenos Aires, he felt an urge to go in.

“I felt I had to enter: It was one of those things one feels inside and one doesn’t know why.”

It was 9 a.m. and in the rather dark church he spotted a priest that he did not know and saw him enter a confessional. He recalled, “I don’t know what happened next. I had the sensation that someone was leading me and taking me into the confessional. Then I recounted my things, I confessed…. There I felt that I had to be a priest. I was certain of this. I was certain. Then, instead of going to walk with my friends, I returned home because I was so emotional. Afterwards, I finished my studies and all the rest, but I had decided to follow that path.”

On this 50th anniversary of his priesthood, Francis, who now sees himself as “the world’s parish priest,” continued working as usual with a long series of audiences in the morning, including singers and musicians who will perform in the annual Vatican concert for Christmas.

Pope Francis will travel from Santa Marta to the nearby Jesuit Curia to present the writings of Miguel Angel Fiorito, S.J., known as “Maestro Fiorito,” the Argentine Jesuit who was renowned as a “master of spirituality.”

In the afternoon, he was scheduled to participate in two events: one related to young people, the other for the presentation of the writings of an Argentinean Jesuit whose spiritual reflections and conversations so influenced his own life as a priest.

In the first event, Francis inaugurated a new facility in the Vatican and another—by video link—in Los Angeles for the Pontifical Foundation’s Scholas Occurentes, a project for the education of young people through sports, art and music. The project traces its origins back to his years as archbishop in Buenos Aires, but now, under his pontificate, it has taken on an international dimension.

Twenty young people from indigenous communities in different countries and four continents have been brought to Rome by the foundation for this event. He met there as well a group of first ladies from Latin America—Michelle Bolsonaro of Brazil, Fabiola Yanez of Argentina, Silvana Abdo Benitez of Paraguay, Maria Juliana Ruiz of Colombia and Kim Simplis Barrow of Belize. The first ladies are working with Scholas Occurentes in this intercultural, interreligious educational project with young people.

This evening, Pope Francis will travel from Santa Marta to the nearby Jesuit Curia to present the writings of Miguel Angel Fiorito, S.J., (1916-2005), known as “Maestro Fiorito,” the Argentine Jesuit who was renowned as a “master of spirituality.” Fiorito greatly influenced not only the future pope when he was a young Jesuit but also many other Jesuits in his homeland and other parts of Latin America in the 1960s and 1970s. Indeed, many of the concepts and ideas developed in the teaching of Pope Francis can be traced back to Maestro Fiorito, such as those related to popular piety and culture, “the faithful people” and discernment.

Fiorito was rector of the Jesuit-run University of Salvador in Buenos Aires (1970-73) and dean of the faculty of philosophy at the Colegio Máximo de San José (1964-69). He later served as director of the journal Stromata. When the young Father Bergoglio became provincial of the Jesuits in Argentina in 1973, he appointed Fiorito to be instructor of the tertianship of the Jesuits in the province and editor-in-chief of the Journal of Spirituality, in which much of his esteemed work on the Spiritual Exercises of St. Ignatius and on the subject of discernment was subsequently published. Fiorito also engaged in a theological dialogue and informal discussions with young Jesuits, also helping them understand and absorb the teachings of the Second Vatican Council as they engaged in pastoral work.

A boy dying of cancer wanted to be buried near Pope Francis. His wish came true.
Gerard O’Connell

Fiorito’s writings and notes have been collected into five volumes, some 2,500 pages, by the pope’s nephew, Jose Luis Narvaja, S.J., and are being published by La Civiltà Cattolica. It is unusual for a pope to present the work of others, but Francis chose to personally present the writings of Maestro Fiorito because he wants them to be known to a worldwide audience.

In the preface to the work, Pope Francis described Maestro Fiorito as "basically a man of dialogue and listening” who “taught many to pray, to dialogue in friendship with God.”

He remembered him as “a loving father, patient teacher and firm adversary” when firmness was needed, but one who “was always respectful and loyal and never an enemy.” Pope Francis said he was able to discern “the time of God” in things and to teach that discernment itself is the “cure from spiritual blindness,” that "sad disease” that acts as an obstacle to divine action.

Francis will speak about Fiorito this evening at an event hosted by the superior general of the Jesuits, Arturo Sosa, S.J., together with the editor-in-chief of La Civiltà Cattolica, Antonio Spadaro, S.J. America will publish a report of this event tomorrow.