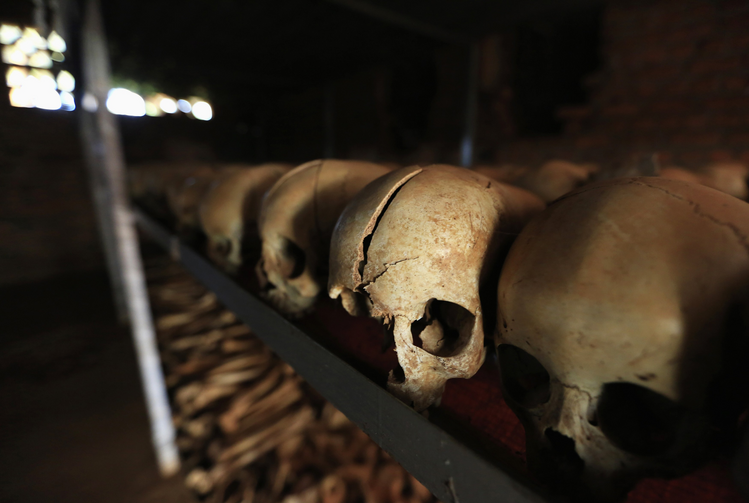 Preserved skulls of victims of the 1994 Rwandan genocide are seen on display in a Catholic church in Nyamata, Rwanda on April 9, 2014. Civilians took shelter inside the church during the three months of violence. (CNS photo/Noor Khamis, Reuters)

The killings began on the evening of Easter Wednesday, April 6, 1994, and continued for three months. By the end, over 800,000 Tutsis, as well as moderate Hutus opposing the genocide, were massacred. Between the second week of April and the third week of May, the daily rate of killing was at least five times that of the Nazi death camps. Three-quarters of the Rwandese Tutsi population fell victim to the genocide. The elderly, children, the infirm—all were killed; there was no haven. The churches, formerly offering sanctuary, were the first places to be attacked. More Rwandese citizens died there than anywhere else.

In a country that was predominantly Catholic, the majority of those killed were Catholic—as were those doing the killing. Church authorities were silent, even complicit in supporting the Hutu supremacist ideology that culminated in genocide. Priests and sisters themselves numbered among the genocidaires. In March 2017, Pope Francis acknowledged the “sins and failings of the church” that had so “disfigured the face” of Catholicism, pleading for a “purification of memory.”

In a country that was predominantly Catholic, the majority of those killed were Catholic—as were those doing the killing.

Some two years later, the Jesuit scholars Elisée Rutagambwa and Marcel Uwineza, themselves survivors, responded to the pope’s invitation by hosting a major international conference in Kigali, Rwanda, on “Reinventing Theology in Post-Genocide Rwanda: Challenges and Hopes.” Commemorating the 25th anniversary of the genocide against the Tutsi, the conference held in late June drew on leading African theologians, international scholars and leaders of nongovernmental organizations. Three bishops—Antoine Kambanda, Smaragde Mbonyintege and Philippe Rukamba—participated, as did political representatives and members of the local community.

Today, stability has been restored in Rwanda and the country attracts considerable financial investment. Yet the wounds remain. Fittingly, the aforementioned conference took place at the Jesuit Centre Christus, where three Jesuits seeking peace and their companions were murdered at the very onset of the genocide. Daily, we were reminded that though the killings were legion, the victims were always particular, their stories unique.

Today, stability has been restored in Rwanda and the country attracts considerable financial investment. Yet the wounds remain.

A purification of memory will, of course, be a long and arduous endeavor. The principal architects will be the new generation of theologians like Fathers Rutagambwa and Uwineza. But certain themes emerged that are, I believe, significant not only for Rwanda but, as the international focus of the conference showed, for all citizens of the household of faith. For crimes against humanity are just that; the face disfigured is our own. Running throughout the presentations, as well as the contributions from the local community, was the critical role of witness, of testimony. How does theology bear witness, speak to what remains, finally, unspeakable?

A second theme follows suit: How do we remember? As the genocide itself attests, the mere memory of suffering, of atrocity, is no guarantee against further atrocity. How, then, are the stories and testimonies woven into the living memory, the memoria passionis (the memory of the Passion), which in Johann Baptist Metz’s words is at the heart of our faith? Finally, what sustains the hope of reconciliation after such suffering and betrayal? A hoping against hope? Let me say a brief word about each theme.

As the Rwandan genocide itself attests, the mere memory of suffering, of atrocity, is no guarantee against further atrocity.

The African theologian Elochukwu Uzukwu once said that we need a church “with large ears”—a listening church, close to the struggles of its people. Certainly, in Rwanda such a church must listen to the stories that, in the wake of genocide, become testimony. And at the conference, eloquent testimony was given, not only by scholars like Sister Thérèse Mukabacondo, Mih Bibiana Mbei Dighambong, Jean Baptiste Ganza, S.J., and Innocent Rugaragu, S.J., but also by legal and political leaders like Florida Kabasinga, who served in the International Criminal Tribunal for Rwanda in Arusha, Tanzania; Marie Claire Gatayire, a founding member of Rwandan Graduates Genocide Survivors; and Euthalie Nyirabega, a member of the Rwandan Parliament.

Following the presentations, questions often became the occasion of further testimony from those attending, and their testimony raised still further questions: “God protected me as I fled,” said one survivor, but how is it so many others perished? Where was our God? Where was our church? Still others questioned what forgiveness means after mass atrocity.

Certainly a theology that is to be true to its name, the study of the divine Word, must begin with these words of victims. Women’s suffering and the cries of children, in particular, must be heard. Here, the perennial question of theodicy, reconciling God’s mercy and power, ceases to be speculative. It is lived, given voice in the stories telling not only of such suffering but of grace. We recalled the story of Sister Félicité Niyitegeka of the Auxiliaries of the Apostolate. As the genocide spread to Gisenyi, she sheltered Tutsis seeking refuge in her convent. Informed of this, her brother, a high-ranking member of the military, urged her to flee. She replied, “I would rather die than abandon the 43 persons for whom I am responsible.” On April 21, 1994, she and other members of her community were killed, sharing the fate of the Tutsi victims.

The killing in Rwanda was due not to age-old, atavistic enmity but to a racist mythology nurtured in the colonial period and abetted by Belgian (and later French) realpolitik.

Again and again, we turned to the role of memory, as such stories form a greater story, a remembrance of genocide—kwibuka in the Kinyarwanda language. For now, “before” and “after” are marked indelibly in Rwanda’s history. A leading African theologian, Laurenti Magesa, explored the role of memory after genocide in a “new evangelization,” not only for the Rwandan church but for the global church. Yet remembering, as Father Magesa, Léocadie Lushombo, J. J. Carney and Yvon Christian Elenga, S.J., emphasized, is never merely factual representation or reproduction. For memory invokes not the pastness of the past but its ethically fraught presence. The story that memory tells must disclose the complex, causal nexus leading to genocide: how functional distinctions were racialized in the colonial era and how ethnicity was politicized.

The Skulls Of Bisesero: How to commemorate the Rwandan genocide
William Collins Donahue

As the scholars reminded us, the killing was due not to age-old, atavistic enmity but to a racist mythology nurtured in the colonial period and abetted by Belgian (and later French) realpolitik. Shelly Tenenbaum, a professor of Holocaust and genocide studies and daughter of Holocaust survivors, offered a comparative assessment of the genocides and the racialization of identity. M. Shawn Copeland addressed similar themes in light of the history of racial oppression in the United States; and David Hollenbach, S.J., explored the implications of global human rights law and the United Nations’ recognition of a “responsibility to protect” in the face of genocide. Appeal to the rhetoric of rights is telling, for the memory born of testimony must account for the systemic distortions of supremacist ideology, yet refuse to “essentialize” victim and perpetrator. Victims can become executioners. In the Rwandan the genocide, they did: The myth of Hutu supremacy in Rwanda rested on a cult of victimization, a memory that congeals ethnic identity and divides.

The African theologian Emmanuel Katongole wrote that “Rwanda’s social history reveals to us how stories can kill.” But stories can save, too. As Scripture scholars Thomas D. Stegman, S.J., Michel Kamanzi, S.J., and Martin Nizigiyimana argued, the memory of the Passion, of victims’ cries, becomes God’s cry, the leaven of a new theology. And yet, as in the Easter appearances, the wounds remain. Lament is always a remembering into the future; there can be no cheap forgetting. Neither can there be prophecy in the church if there is not first repentance. As the conference participants reminded us, there is no forgiveness that does not remember Nyamata and Ntarama, two of the six churches we visited that are now memorial sites for the thousands killed and buried there.

Lament is always a remembering into the future; there can be no cheap forgetting. Neither can there be prophecy in the church if there is not first repentance.

Torturers often say, “no one will hear your cry.” Yet in the memory of the Passion, in the Eucharists we celebrated, cries are heard. And so, as Father Ganza reminded us, there is also a place for hope. On the final day, Augustin Karekezi, S.J., offered a moving testimony to the deaths of Innocent Rutagambwa, S.J., Patrick Gahizi, S.J., Chrysologue Mahame, S.J., and their 14 companions, buried where they were killed, at Centre Christus. Notably, Father Mahame was killed for much the same reason as Ignacio Ellacuría at the Central American University in El Salvador. He, too, was an ardent apostle for peace and reconciliation, martyred because of his mission.

Here, then, at the end of our conference, the themes of witness, remembrance and hope were drawn together; for a new theology will be written in the blood of martyrs. One year after the genocide, Father Karekezi wrote that “we still have reason to dream.” On that first commemoration, Father Karekezi recalled the words of the prophet Jeremiah—words that inspire a new theology for a new church: “The Lord says: ‘I know the plans I have for you, plans for your welfare and not for harm, to give you a future with hope’” (Jer 29:11).

Show Comments ()
Comments are automatically closed two weeks after an article's initial publication. See our comments policy for more.
Show Comments ()
Join the conversation: Login or create an account
Before you can comment, you need to update your profile to include your first and last name, as required in our comments policy. Then reload this page and you'll be set up for commenting. Update your profile
More: Africa / Theology / Social Justice / War & Peace 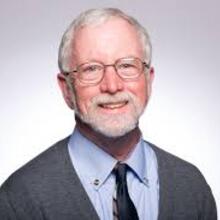 William O’Neill, S.J., is professor emeritus of social ethics at the Jesuit School of Theology of Santa Clara University. He is currently working with the Jesuit Refugee Service in Nairobi, Kenya.