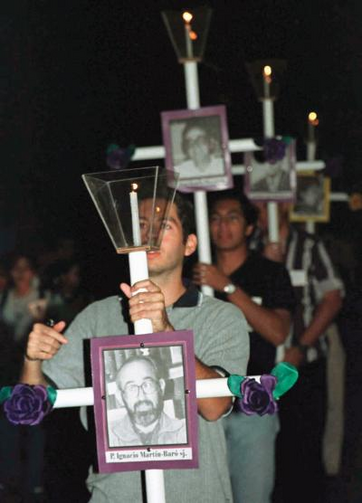 On the morning of Nov. 16, 1989, 26 years ago today, an elite battalion of the Salvadoran Army entered the grounds of San Salvador’s renowned Jesuit University of Central America, with orders from El Salvador’s military high command to kill Fr. Ignacio Ellacuría and leave no witnesses.

When it was all over, the soldiers had killed in cold blood six Jesuit priests, their cook and her teenage daughter. It was a crime that shook the world’s conscience.

“Why?” Fr. Jon Sobrino asked rhetorically in an interview in 1989. “Because we supported dialogue; that was considered treason.” The dialogue Fr. Ellacuría supported was the discourse of peace in a country riven by a civil war that had claimed the lives of 75,000 Salvadorans.

We may have never known who was responsible for the massacre. The military government immediately blamed the opposition, and engaged in a massive cover-up. But, unbeknownst to the soldiers who had stormed the university that night, Lucia Cerna, who worked at the university, and her husband had taken shelter inside the walls of the university at the priests’ invitation because the roads were too dangerous to traverse that evening.

Cerna saw the soldiers enter the campus and overheard the massacre. She heard the last words of Fr. Ignacio Martín-Baró, who yelled “this is an injustice!” before he was silenced. She has always wondered if he called out so she could hear and tell the truth.  After the massacre, she fled to the United States, leaving behind her family and way of life, because it was not safe to tell the truth.

Today, the truth about the massacre and the brutal human rights atrocities committed by the Salvadoran military during El Salvador’s 12-year civil war finally has the chance to be told before a court of law. A magistrate judge in North Carolina is currently deliberating over whether to order the extradition of Colonel Inocente Montano, El Salvador’s former vice minister of public security, to face criminal trial in Spain for his role in the massacre. A decision could come down any day now.

The Center for Justice and Accountability (CJA) and the Spanish Association for Human Rights filed a suit in Spain in 2008 against Montano and 19 other military commanders for their role in the massacre. The Spanish court issued international warrants against them. Montano was living in the Boston suburbs. As a result of the warrant, U.S. authorities arrested and convicted him for immigration fraud and sentenced him to 21 months in prison, which he has now served.

Spain has requested his extradition to stand trial. Montano is the only perpetrator of the massacre within reach of the Spanish court because an amnesty law protects the former military officials living in El Salvador.

The Jesuits Massacre Case, which could go to trial in Spain as early as spring or summer of next year, is of great significance for the Salvadoran people. A trial before the Spanish National Court will shed light on the brutality of these crimes and validate the experiences of the victims and survivors of El Salvador’s military regime who have long sought to tell their stories. It has the potential to turn the tide of impunity for human rights abuses in a country that has never fully recovered from the wounds caused by its brutal civil war.

Truth and accountability will give strength to all those who are trying to end the cycle of violence in El Salvador that has resurged to levels not seen since the civil war. There are those who believe that peace will not return until El Salvador deals with its past, and holds accountable those responsible for the murder, torture and disappearances of so many. This case could apply international pressure needed for El Salvador to overturn its amnesty law, opening a path to justice and reconciliation.

For more information on the Jesuit Massacres Case visit the Center for Justice and Accountability website.

C. Dixon Osburn is the executive director of the Center for Justice and Accountability.