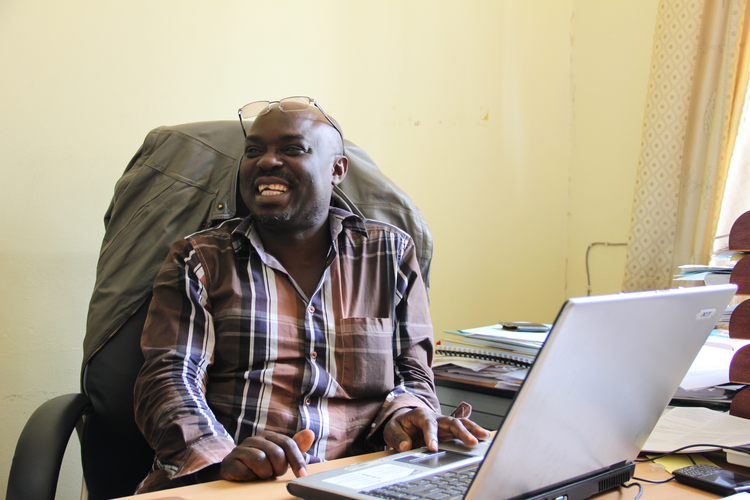 Managing editor Kerry Weber is reporting from Rwanda, Oct. 21-26, as part of the Catholic Relief Services Egan Journalism Fellowship. Check back for updates at americamagazine.org

Kigali, Rwanda — Perhaps one of the most notable characteristics of the Kigali Memorial Centre is its simplicity: a small fountain; a stone courtyard; some gardens, with water fixtures flowing through them. And the long, brown slabs of brick marking the graves of 250,000 of the men, women and children who died in the 1994 genocide in Rwanda. Beginning in April of that year, and continuing for 100 days, Hutus, the nation’s ethnic majority, killed an estimated 1 million Tutsis, the minority, as well as moderate Hutus. The memorial center here is only one of several memorials throughout the country, each marking a past that is as crucial to remember as it is difficult to discuss.

The mass grave here remains open, in part, and through a wide plate of glass visitors can view a gray cloth with three white crosses stitched onto it. Nearby, there is an arrangement of yellow roses bundled with a piece of tulle and adorned with a ribbon on which someone has written in blue marker: "Never Again."

Rwanda is a country that longs to be known for something other than the genocide, and over the past 20 years, the nation's government has worked hard to replace that reputation with a more positive one. In many ways, it has succeeded. Rwanda has made drastic advances, and now ranks among the cleanest, safest and least corrupt countries in Africa. And yet its deepest wound is one that cannot be healed by superficial changes.

Oswald Samvura sits in a bright yellow office beside a large window at the Episcopal Justice and Peace Commission, a division of the Episcopal Conference of Rwanda, the country's equivalent of the U.S.C.C.B. As program director, he has worked closely with Catholic Relief Services, as well as other partner agencies, to implement programs that foster reconciliation among survivors and perpetrators of the genocide. "The challenges of reconciliation are tied up with perception of ethnicity," he says. "It goes beyond Rwanda to the subregion. All of the disputes we have are based on perception of ethnicity. It brings in a lack of trust in people."

Between 2008 and 2012 the commission worked with CRS to try and get both survivors and perpetrators to stop viewing the other as enemy; they tried to get each group to see where the other was coming from. And in many instances, these conversations seemed fruitful. "It is difficult to bring these conflicting parties together but it is possible," says Samvura. "You might even find someone who survived the genocide who finds that the wife of a perpetrator is suffering more than he is." Some households of perpetrators have given a cow to the survivors, a gesture filled with affection and respect in Rwandan society. Still, these changes take time and are difficult to measure.

"Reconciliation is a very long process; some can easily forgive, others may be able to do that 5 years from now," says Zacharie Ndayishimiye, a member of the Episcopal Peace and Justice Commission in Rwanda. He sits up straight in his chair and speaks quietly. "It is not easy. Even for those who forgive quickly, it is a process."

Twenty years is a remarkably short time, in terms of history and healing. And yet it is long enough that there are many young Rwandans who did not directly experience the horror of those three months in 1994, but who have nevertheless been affected by them their whole lives. Preventing another genocide means, in part, first addressing issues such as poverty, gender roles and nutrition, which fuel unrest. It also means that Rwandans must warn the next generation. But first, many adults must grapple with their own role in the atrocities.

"It is a history that children have to know, but when you approach the topic, it is very difficult to explain," Ndayishimiye says. "A child can ask an adult, 'Were you killing people?' and parents have a hard time giving an answer that doesn't traumatize kids."

Places like the Kigali Memorial Center can play a role in those discussions. It is a place that works to preserve the memory of those who died, but it also serves as a research and teaching center working to prevent such tragedy in the future. Its exhibits might very well serve as a jumping off point for conversations, not only between parents and children, but for all who value peace and justice.

The center's unassuming exterior gives way to exhibits documenting a nation's complicated past. Visitors will learn about the systemic rape and murder of Tutsi women, and of Hutu women who had married Tutsi men. You will read about the 300,000 orphans that were left when the killing ended. You will see photos of the faces of hundreds of those who were killed—a man against a brick wall wearing a black and red sweater, a father in a white shirt holding his child in his arms. You will walk by skulls and bones and tattered clothing hanging like ghosts in darkened rooms. You will pass by rosaries and pens and children's shoes, all found beside their dead owners. You will pass by heartbreaking photos of children, which are mounted above their names and accompanied by short lists.

You will not be able to pass by without tears the display for Francine Murengezi Ingabire, a girl with a wide smile and closely cropped hair, which reads:

Age 12
Favourite sport: swimming
Favourite food: eggs and chips
Favourite drink: milk and Fanta Tropical
Best Friend: her elder sister Claudette
Cause of death: hacked by machete
You will walk through exhibits remembering other genocides—in Armenia, Namibia, Cambodia, the Balkans and the Holocaust—and recall that after each one, someone pledged: Never Again. And yet. You will wonder why it happened and know that there is no good answer. You will search for one anyway. Because in the end you know the only possible reaction, the only possible way to heal, is love. And you will think: If only it were that simple.