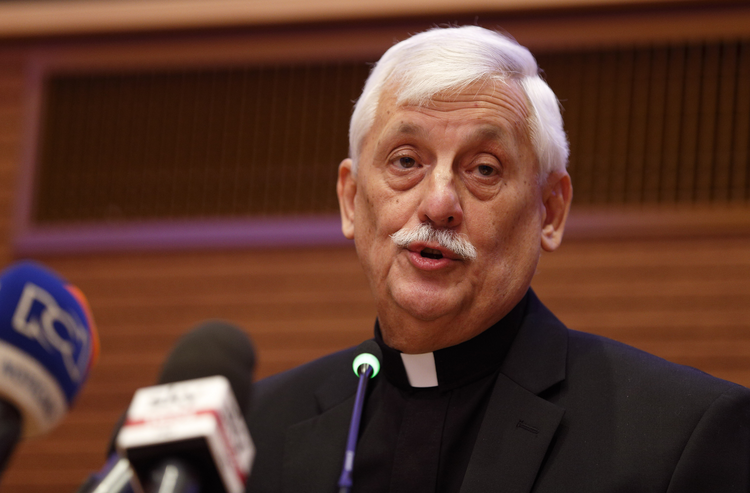 “We Jesuits are people of hope; we believe another world is possible,” Arturo Sosa, S.J., the superior general of the Society of Jesus, told journalists at an end-of-year reception at the Jesuit Curia in Rome on Dec. 4.

Greeting some 20 reporters in the Arrupe Hall of the Jesuit Curia, Father Sosa reflected on what the Jesuits have been doing over the past year and the significance of the mission Pope Francis has given to the Society when he confirmed the four universal apostolic preferences that are to permeate and inspire the work of Jesuits worldwide over the next 10 years.

The Venezuelan-born head of the Jesuits said that in his travels on all continents he has witnessed “the existence of so much frustration among so many people” in the face of “the inequality and poverty” in today’s world, together with “the forced movement of persons” who are either displaced in their home countries or forced to be refugees and “the difficulty” so many people have “to live in freedom and democracy.”

Father Sosa said the Society of Jesus will also seek to respond to “the concrete requests of Pope Francis” in support of his work for the renewal of the church and its structures.

He spoke of how the Society of Jesus is responding to some of those challenges today, not alone but “as part of that movement of peoples toward a future where every human being and all peoples can live with dignity, security” and be able “to develop their cultural creativity and seek to reach their dreams.”

He said his “dream” for the Society of Jesus “is that it collaborates more and more to build a future full of hope.”

He recalled that Jesuits worldwide have laid the groundwork for this challenging work when they engaged in a two-year process of discernment and identified four universal apostolic preferences that Pope Francis subsequently “confirmed” as the road map to guide and inspire all their activities over the next decade: To show the way to God through discernment and the spiritual exercises; to walk with the poor, the outcasts of the world, those whose dignity has been violated, in a mission of reconciliation and justice; to accompany young people in the creation of a hope-filled future; and to collaborate in the care of our common home.

In that discernment process, he said, “we opened ourselves to the inspiration of the Holy Spirit” seeking “to be guided and sent on mission.” He explained that “discernment is not a method for taking decisions, nor for the exercise of strategic planning,” such as is done by big corporations or N.G.O.s, rather it is “founded in our faith that the world has a very high potential, that the grace of God is at work in people, that the Holy Spirit is present in human history and can guide us in contributing to renew the face of the earth.”

He noted that “for the first time in the history of the Jesuit order” this “process of discernment” involved not only the Jesuits but also “the women and men who are engaged with them” in the different apostolic works, “including non-Christians and the followers of other religions.”

“The Society of Jesus was born to serve the mission of Christ in the church under the Roman Pontiff,” he said, “it receives its mission from the pope as mediator of the will of God for us.”

Father Sosa: “The Society of Jesus deepens its commitment to the full realization of the orientations of the Second Vatican Council that Pope Francis has put at the center of his Petrine ministry.”

He revealed that on his visits to Jesuit communities on the different continents he discovered that not only the Jesuits but also the women and men engaged in mission with them “recognize” that “the indications” given by the four universal apostolic preferences “have come at the right moment” and are “the fruit of the Spirit” and “a mission of the Spirit received from the church” that will “inspire our way of living, and whatever we do.”

Father Sosa emphasized that these four preferences “cannot be separated from one another, but, like the fingers of a hand, they work well if they move together.” Furthermore, Jesuits will make these preferences a reality when they work “in collaboration” with one another and “with others.”

By implementing the four universal apostolic preferences, he said, “the Society of Jesus deepens its commitment to the full realization of the orientations of the Second Vatican Council that Pope Francis has put at the center of his Petrine ministry.”

He emphasized moreover that all this has to be seen “in terms of service to people and to Christ, in the mission that the church has received from Christ to serve the world.”

Father Sosa, who is the first Latin American to lead the Society of Jesus, then outlined some of the ways in which Jesuits can make the universal apostolic preferences a reality in the life of the church over the next decade.

He said it will seek to provide “instruments” for “a discerning leadership” in order to contribute to “the strengthening of a synodal church.” It will do this by offering courses, grounded on the Spiritual Exercises as well as the social and other sciences, to Vatican officials, superiors general, key persons in the church, including lay women and men and to the worldwide “Ignatian family.” He also emphasized the great need to educate lay people for the political world and to educate politicians, too.

Father Sosa advocated giving women “managerial/decision-making roles” in the church, separating this from the question of priestly ordination.

In this context, responding to a question that recalled how in a talk in March 2017 he had called for giving fuller participation to women in the life of the church, Father Sosa repeated that wish and said that while it is “a complex question” and also related to the role of women in society, he advocated giving women “managerial/decision-making roles” in the church, while separating this from the question of priestly ordination. He noted that today, for example, the majority of Jesuit schools and universities “are in the hands of women,” a development that has happened over the past 30 years.

He said the Society of Jesus will also seek to respond to “the concrete requests of Pope Francis” in support of his work for the renewal of the church and its structures, just as it did by giving him the Spanish-born Juan Antonio Guerrero, S.J., to serve as prefect of the Secretariat for the Economy.

Responding to a reporter’s question, he said that he asked the pope not to make Father Guerrero a bishop because the role of prefect is a task for a limited period, five or 10 years, whereas the sacrament of episcopal ordination is for life. Moreover, he said he believes there are roles in the Vatican that do not require the sacrament of orders and should not be linked to it. This is one of them, he argued, as is the role of prefect of the Vatican dicastery for communications, which is today held by a layman.

Father Sosa declared that Jesuits would seek to work in “partnership” and in “networks,” collaborating with others in the different areas of mission, as it is doing in the nine countries of the Amazon region through the Pan-Amazonian Network, known as Repam.

Father Sosa said the Jesuits would continue to develop their engagement in the ecumenical and interreligious field so as “to re-establish the role of religions in humanizing our world so that we open evermore to transcendence, to life, not to conflict.”

He stressed the crucially important educational role Jesuits are playing and will continue to play through their schools and universities, and he envisaged greater networking in order to have “a global impact.”

All this, he said, involves the Gospel-inspired dimensions of “faith, social justice and reconciliation of people with God, with each other and with nature.” This was highlighted in a very clear way, he said, at the recent celebration of the 50th anniversary of the Secretariat for Social Justice and Ecology, which was started by Pedro Arrupe, S.J., who led Society of Jesus from 1965 to 1983.

He recalled that such work has led to martyrdom, not only for Jesuits but also for women and men who work with them, as happened 30 years ago at the University of Central America in El Salvador and which “showed the power of hope and of life over the power of evil and the power of the devil that still exists as a force that seeks to destroy our efforts.” He added that “the devil throws himself in the way across God’s plan and the work of salvation done in Christ.”

Father Sosa reaffirmed that over the next decade the Jesuits would continue in their commitment to assist migrants, refugees and displaced persons “as a concrete expression of our faith that leads us to open a future of hope.”

He acknowledged that this work could indeed entail martyrdom in the future as it has done in recent times in South Sudan and Syria “but that fear cannot stop me sending people to such apostolic works; though we don’t seek to be martyrs, we seek to serve.”

All the above, he said, is “our response to the cry of the poor and of the earth that we hear so clearly.” Father Sosa, who has made himself available to journalists many times since his election as superior general on Oct. 14, 2016, concluding his address by inviting the journalists present “to listen to the cry of the world today and to make it heard.”