Pope Francis, at site of first nativity scene, issues letter on the importance of the crèche 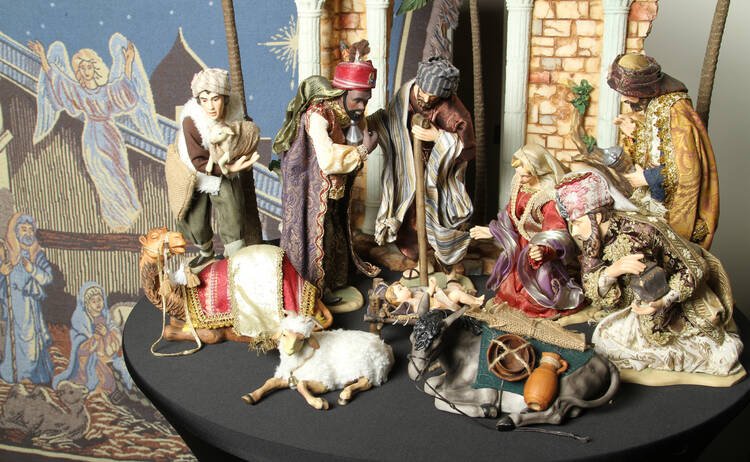 This creche appeared in a Christmas exhibit at the Monastery of the Holy Spirit in Conyers, Ga., in 2018 and is from a collection owned by Marcy Borkowski-Glass of St. Pius X Church in Covington. The exhibit showcased some 500 Nativity scenes from Glass' personal collection and a select few from the monastery. (CNS photo/Michael Alexander, Georgia Bulletin)

Pope Francis has written an apostolic letter “on the meaning and importance of the nativity scene,” in which he encourages Christians worldwide to continue “the beautiful family tradition of preparing the nativity scene in the days before Christmas” by setting up the Christmas crèche not only in their homes but also “in the workplace, in schools, hospitals, prisons and town squares.”

As we contemplate the Christmas story, he said, “we are invited to set out on a spiritual journey, drawn by the humility of the God who became man in order to encounter every man and woman. We come to realize that so great is his love for us that he became one of us, so that we in turn might become one with him.”

The pope, who will be 83 years old on Dec. 17, traveled by helicopter to the hill town of Greccio, 95 kilometers north of Rome, where a shrine commemorates the spot where, in 1223, St. Francis of Assisi used the setting of a cave to replicate the nativity scene for the first time, thereby starting a tradition that quickly spread throughout Christian Europe and later to other continents.

The 3,000-word letter was read aloud for the first time in a chapel near the shrine, in the presence of the pope who was slightly hoarse, as he caught a slight cold since returning from Asia.

Quoting Franciscan sources, Pope Francis recalled that 15 days before Christmas, St. Francis asked a local man named John to help him realize his desire “to bring to life the memory of that babe born in Bethlehem, to see as much as possible with my own bodily eyes the discomfort of his infant needs, how he lay in a manger, and how, with an ox and an ass standing by, he was laid upon a bed of hay.”

John did as the saint had asked. The pope said that “on 25 December, friars came to Greccio from various parts, together with people from the farmsteads in the area, who brought flowers and torches to light up that holy night.” The sources report that “when [St.] Francis arrived, he found a manger full of hay, an ox and a donkey. All those present experienced a new and indescribable joy in the presence of the Christmas scene.”

Pope Francis said, “this is how our tradition began: with everyone gathered in joy around the cave, with no distance between the original event and those sharing in its mystery.” He recalled that Thomas of Celano, the first biographer of St. Francis, “notes that this simple and moving scene was accompanied by the gift of a marvelous vision: one of those present saw the Baby Jesus himself lying in the manger. From the nativity scene of that Christmas in 1223, ‘everyone went home with joy’.”

From the nativity scene of that Christmas in 1223, "everyone went home with joy."

Commenting on all this, Francis said that “with the simplicity of that sign, St. Francis carried out a great work of evangelization.” The crèche, Francis added, “invites us to “feel” and “touch” the poverty that God’s Son took upon himself in the Incarnation” and “implicitly, it summons us to follow him along the path of humility, poverty and self-denial that leads from the manger of Bethlehem to the cross. It asks us to meet him and serve him by showing mercy to those of our brothers and sisters in greatest need.”

Francis remarked that “it is customary to add many symbolic figures to our nativity scenes,” starting with “the beggars” who “have every right to draw near to the infant Jesus; no one can evict them or send them away from a crib so makeshift that the poor seem entirely at home.” Indeed, “the presence of the poor and the lowly in the nativity scene remind us that God became man for the sake of those who feel most in need of his love and who ask him to draw near to them.”

[Submit a photo of your family’s Nativity set and tell us the story behind it.]

In the cave, the pope said, “we find the figures of Mary and Joseph. Mary is a mother who contemplates her child and shows him to every visitor.... In her, we see the Mother of God who does not keep her Son only to herself but invites everyone to obey his word and to put it into practice.” And at Mary’s side, we see Saint Joseph, “who plays an important role in the life of Jesus and Mary”; he is “the guardian who tirelessly protects his family. When God warned him of Herod’s threat, he did not hesitate to set out and flee to Egypt.... And once the danger had passed, he brought the family back to Nazareth, where he was to be the first teacher of Jesus as a boy and then as a young man.”

Francis said “when, at Christmas, we place the statue of the Infant Jesus in the manger, the nativity scene suddenly comes alive. God appears as a child, for us to take into our arms."

Francis said “when, at Christmas, we place the statue of the Infant Jesus in the manger, the nativity scene suddenly comes alive. God appears as a child, for us to take into our arms. Beneath weakness and frailty, he conceals his power that creates and transforms all things. It seems impossible, yet it is true: in Jesus, God was a child and, in this way, he wished to reveal the greatness of his love.”

He recalled that as the feast of Epiphany approaches, we place the statues of the Three Kings who followed the star to find Jesus in the manger, and “the Magi teach us that people can come to Christ by a very long route.” Indeed, when these “men of wealth, sages from afar, with a thirst for the infinite” find Jesus they “fall to their knees to worship him,” and “understand that the God who with sovereign wisdom guides the course of the stars also guides the course of history, casting down the mighty and raising up the lowly.”

Concluding his letter, Pope Francis said that “standing before the Christmas crèche, we are reminded of the time when we were children, eagerly waiting to set it up.” He said, “these memories make us all the more conscious of the precious gift received from those who passed on the faith to us” and “of our duty to share the same experience with our children and grandchildren.”