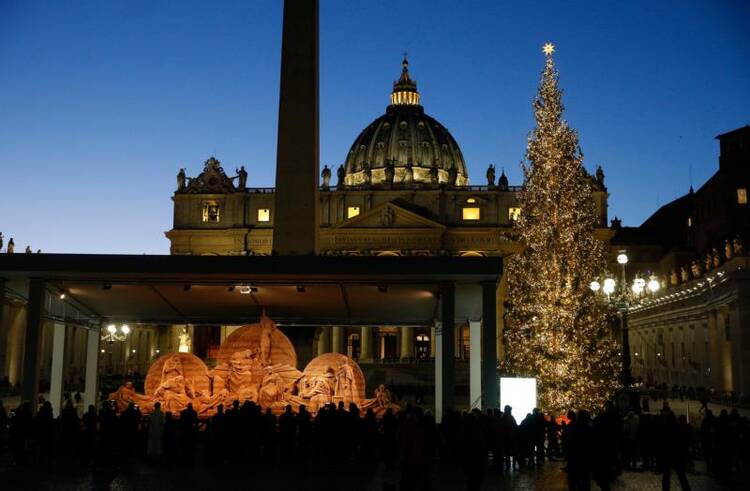 A Nativity scene made of sand and the Christmas tree decorate St. Peter's Square at the Vatican Dec. 10, 2018. (CNS photo/Paul Haring)

Pope Francis opened the season of Advent by warning against “consumerism, a virus that attacks the faith at its roots,” as he celebrated a festive Mass in the Congolese rite in Saint Peter’s Basilica on Dec. 1.

The Congolese Catholic community of Rome had invited him to celebrate with them on this special day in which they commemorated three important events: the 25th anniversary of the founding of the Catholic chaplaincy for believers from the Democratic Republic of the Congo who are living in Rome; the 25th anniversary of the beatification of Isidore Bakanja, a catechist and martyr; and the feast of another martyr, Blessed Marie-Clémentine Anuarite Nengapeta, who pardoned her killers before she died.

The Congolese (originally Zairean) rite was started by the Congolese bishops in 1969 after the Second Vatican Council, and is an adaptation of the Roman rite. It was approved by the Congregation for Divine Worship in 1988, and uses dance, oral stylistic traditions, songs with traditional instruments and invocation of the saints and ancestors of upright hearts.

In his homily, Pope Francis recalled that the word “advent” means “coming.” He said the word reminds us that “Jesus comes” and this is “the root of our hope, the security that amid the tribulations of the world the consolation of God comes to us, a consolation not made of words but of a presence, his presence that comes in our midst.”

He said the announcement that “the Lord comes” is “our point of departure” because “we know, that beyond every favorable or contrary event, the Lord does not leave us alone. He came 2,000 years ago and will come at the end of time, but he also comes today in my life, in your life…. The Lord is never tired of us, he desires to come, to visit us.”

Greeting those present, Francis noted they had “come from afar, and had left your homes, your things and your dear ones.”

He told them, “You have found a welcome here together with difficulties and unexpected things, but for God you are always welcome invitees, because for God we are not foreigners but awaited sons and daughters. And the church is the home of God, so then consider yourselves at home.” He added, “We have come to walk together towards the Lord…and, as the Prophet Isaiah says, let us walk in his light.”

He told those in the basilica, “consumerism is a virus that attacks the faith at its roots, because it makes you believe that life depends only on what you have, and so you forget God, who comes to meet you and who is at your side.” Moreover, “The Lord comes but you follow more the appetites that come to you; the brother or sister knocks at your door, but they are an annoyance, because they disturb your plans.”

"Consumerism is a virus that attacks the faith at its roots."

Pope Francis recalled that “in the Gospel, when Jesus points out the dangers to the faith, he is not concerned about powerful enemies, hostilities or persecutions, because that have been and will be, but they do not weaken the faith.” Instead, “the true danger is that which anesthetizes the heart: it is to depend on consumptions and to allow one’s heart to be weighed down and dissipated by needs.” In this way, “one lives from things and one does not know for what; one has many things, but one does not do good anymore; the houses are filled with things but empty of children; time is thrown away in pastimes, but one does not have time for God or for others. And when one lives for things, they are never enough.”

We see this today, Pope Francis added, “where consumerism reigns: how much violence, even verbal violence, how much anger and wish to find an enemy at any cost. So, the world is full of arms that provoke death, and we do not take notice of the fact that we continue to arm our heart with anger.”

Jesus wants to put us on our guard against all this, the pope said. He tells us “be vigilant, and not give into the sleep that envelops us.” But, he said, “to be vigilant, one needs to have the certain hope: that the night will not last always, that soon the dawn will come. So, it is for us: God comes, and his light will clear even the thickest darkness.”

Turning to the Congolese present in the basilica, Francis told them, “when we open our hearts to the Lord and to our brothers and sisters, then comes the most precious gift that things cannot give us and which Isaiah announced in the first reading today: peace.” He urged them to pray for peace in their homeland, which today is “gravely threatened in the east of the country, especially in the territories of Beni and Minembwe where conflicts are spreading, fed from outside, with the silent complicity of all.”

“To be vigilant, one needs to have the certain hope: that the night will not last always, that soon the dawn will come."

He encouraged them to implore the intercession of their Congolese martyr, Blessed Marie-Clémentine Anuarite Nengapeta, so that she will pray that God, “with the help of neighboring peoples,” may help those fighting “to renounce arms” so that they may live together in peace, “and that the economy may be converted from one of war to one of peace.”

At the end of this celebration, Sr. Rita Mboshu Kongo, a theologian and professor, thanked him on behalf of the Congolese community for celebrating this Mass for them and also for his “great openness” to the churches on the peripheries of the world “founded on synodality.” She requested that he canonize her church’s martyr saints and thanked him for his concern for the marginalized peoples, women, young people, the poor and for his “care for creation” and reminded him that the Congo basin is, together with the Amazon region, “one of the two lungs of the world.”

She spoke about “the cancer of war and of insecurity” that is crippling her country and denounced the “hidden genocide” in her homeland in which some 6 million people have been killed in conflict over the last 20 years, and that is happening “in the total silence at the global level.” She implored him not only to pray for her country but also to come and visit the Congo.

The Congolese choir concluded the celebration by singing the “Salve Regina” in Latin.