I reached out to every U.S. diocese. Here are the ones implementing the 2018 pastoral letter on racism. 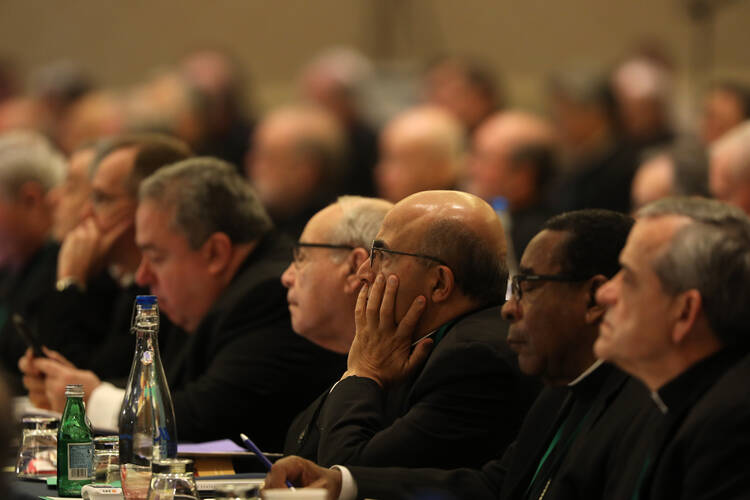 Bishops listen to a speaker during the fall general assembly of the U.S. Conference of Catholic Bishops in Baltimore Nov. 12, 2019. (CNS photo/Bob Roller)

On the final day of the U.S. bishops’ fall meeting, Bishop Shelton J. Fabre of Houma-Thibodaux, La., the chairman of the bishops’ Ad Hoc Committee Against Racism, provided an update about the work that body has been doing since the publication of “Open Wide Our Hearts: The Enduring Call to Love” in November 2018. “Open Wide Our Hearts” was the first pastoral letter on racism issued by the U.S. Conference of Catholic Bishops in almost 40 years.

Within eight months of its publication, Bishop Fabre stated, 2,000 copies of the letter were sold, and listening sessions were held in at least 13 dioceses. A study guide to accompany the letter was released in September, and the ad hoc committee is working with Catholic publishers to create textbooks to better engage students in Catholic schools across the country.

But an informal survey I conducted this summer paints a different picture. I reached out by email to every diocese in the country and asked: Has your diocese started any new initiatives based on the 2018 pastoral letter on racism published by the U.S.C.C.B? There are 197 dioceses in the United States. At the time of writing this story (and after following up via phone), I had received 74 responses. Thirty dioceses have started new initiatives, while 12 already had anti-racism programs in place. These include dioceses in Tucson, Ariz.; Fairbanks, Alaska; San Diego; Santa Rosa, Calif.; Pensacola-Tallahassee, Fla.; Marquette, Mich.; Jefferson City, Mo.; Salt Lake City; La Crosse, Wis.; and archdioceses in Chicago, Detroit and Seattle.

Many of the dioceses that responded to the pastoral letter hosted listening sessions or started book clubs or discussion groups based on “Open Wide Our Hearts.” These include the dioceses or archdioceses of Springfield, Ill.; Lafayette and Indianapolis, Ind.; Owensboro, Ky., Kalamazoo, Mich.; St. Cloud, Minn.; Newark, N.J.; Galveston-Houston and San Antonio, Tex.; Richmond, Va.; and Milwaukee, Wis. The Archdiocese of Baltimore started a working group based on the pastoral letter.

Several dioceses have begun or continued ambitious projects. In 2015, the Archdiocese of St. Louis started the Peace and Justice Commission following the fatal shooting of Michael Brown in 2014. “The timing of the pastoral letter couldn’t have been better for us,” said Marie Kenyon, the director of the commission. After the pastoral letter was approved last November, the commission began forming working groups.

It is important for the Catholic Church to continue to prioritize racial reconciliation in our nation.

Lonnie Thibodeaux, the director of communications for the Diocese of Houma-Thibodaux, said via email that Bishop Fabre’s diocese put the resources provided by the ad hoc committee to work in 2018. The diocese formed a committee of laypeople and clergy to address racism in the diocese, and it held listening sessions earlier this year. Additionally, Bishop Fabre has made a commitment to have all seminarians studying in his diocese participate in Xavier University of New Orleans’ Summer Institute for Black Catholics Studies.

“I am training seminarians to be priests in a part of the country and in a diocese that has, comparatively speaking, a very large African-American presence compared to the rest of the country,” Bishop Fabre explained. “They need to be prepared to minister to black Catholics.” This initiative will begin in the summer of 2020.

“Open Wide Our Hearts” was published a year after the Ad Hoc Committee Against Racism was created in 2017. The pastoral letter, which describes “the ugly cancer” of racism in the United States, comments on issues like anti-Muslim sentiment, xenophobia, the Flint water crisis, police brutality and mass incarceration.

It asks Catholics to work “for the end of racism in all its forms.” In the letter, U.S. bishops “instruct our priests, deacons, religious brothers and sisters, lay leaders, our parish staffs, and all the faithful to endeavor to be missionary disciples carrying forth the message of fraternal charity and human dignity.”

This means, the bishops add, “educating themselves, reflecting on their personal thoughts and actions, listening to the experience of those who have been affected by racism, and...developing and supporting programs that help repair the damages caused by racial discrimination.”

Last year, along with the letter, the bishops provided educational resources for students of all ages. These include resources for students in kindergarten through eighth grade that focus on the work of Augustus Tolton, the definition of personhood, implicit bias and institutional racism. High school packets touch on the legacy of Martin Luther King Jr., systemic racism and the dehumanization of Jews in Nazi Germany. There are also resources for college students and adults.

How effective are pastoral letters in the United States?

For parishes, the U.S.C.C.B. offers resources on how to discuss the letter, prayer guides and backgrounders on the intersection of racism and fields like education, employment, housing and the criminal justice system. All of these resources are available in English and Spanish.

How effective are pastoral letters in the United States? Natalia Imperatori Lee, a theology professor at Manhattan College in New York, tells me that the bishops have a mixed history with pastorals. Part of the problem, she says, is that the process behind the drafting of these letters is not as transparent as it should be.

“If they are consulting, it’s done in ways that aren’t public,” she said. An example of the church successfully using pastoral letters, she tells me, is “Economic Justice for All,” released in 1986, which touched on the relationship between U.S. economics and Catholic social teaching.

“In order to write E.J.F.A., the bishops held town hall meetings around the country for people to share their experiences with the country’s economy and especially their experiences with poverty. Then the sections were drafted, and these drafts were sent out for comment by the public,” she said, adding that this is the kind of collaboration or synodality promoted by church leaders like Bishop Robert McElroy of San Diego.

Following the publication of Pope Francis’ apostolic exhortation on the family, “Amoris Laetitia,” in 2016, the Diocese of San Diego convened a synod on how to implement the document. The synod included 100 parishes and 113 delegates, most of whom were lay women and men, and synod organizers invited married and unmarried couples to share their experiences.

“That kind of dialogical process, where the laity is invited to share their experiences first and then the document is drafted and then they are allowed to comment on the draft, is due for a comeback,” said Ms. Lee. “In an era when we seem to be looking for ways to let the laity have more decision-making power and oversight, this sort of conversational methodology in drafting pastoral letters seems like an avenue worth reopening.”

What more should the Catholic Church be considering when it comes to racial justice?

I also asked lay Catholics across the country on social media for their thoughts on the pastoral letter. Jennifer Cawley of Stone Mountain, Ga., welcomed the letter. “It was helpful with alerting my high school students to the fact that the Catholic Church has been aware [of] and against racism.” Annie Selak of Washington, D.C., wrote, “I think it’s important to address the topic, but the letter too often proceeds from a white point of view.”

Stuart Wilson-Smith, C.S.P., an associate pastor at Old St. Mary’s Church in Chicago, believes it is a strong letter but wishes the bishops had commented more directly on “white-European normativity” in the church. “As a white male from a small, predominantly white town in Canada, I admit I never used to notice when Catholic conferences (e.g., FOCUS, Catholic Answers) would put out the poster with their speakers, and 85 to 100 percent were white people. Once I started noticing, I couldn’t stop” he wrote. “The fact that organizers could print those posters and send them out on social media represents that this is not on anyone’s radar: part of the insidious kind of racism the bishops speak to that may not seem ‘hateful’ and discriminatory on the surface but is no less problematic.”

As we are witnessing U.S. institutions, including Catholic schools like Georgetown University, grappling with systemic racism in the United States and its consequences, and as Pope Francis continues to call for synodality, it is important for the Catholic Church to continue to prioritize racial reconciliation in our nation.

Along with pastoral letters, what more should the Catholic Church be considering when it comes to racial justice?

I asked this question to Shannen Dee Williams, an assistant professor of history at Villanova University and author of the forthcoming book Subversive Habits: The Untold Story of Black Catholic Nuns in the United States. Ms. Williams stated that “the church must begin to say with its words and actions that the lives of black and brown people fundamentally matter. The church must do this intentionally in the areas of education (especially teaching black and brown Catholic history on every level), financial reparation, church leadership (including women and members of the laity) and its advocacy, especially on ‘life issues’ affecting black and brown people, including ending police violence, fighting mass incarceration and family separation as the result of it, working to lower black maternal death rates and ending the racial wealth gap.”

Another idea: a national synod on racism that would allow us to move past listening sessions and develop ways to concretely implement the action items laid out in “Open Wide Our Hearts.” Many of the Catholics and clergy I spoke with whose parishes had not started any initiatives said that they did not know where or how to start. A synod could help jumpstart the conversation and help local leaders move past listening sessions and create a more responsive church.

Correction: Due to an editing error, the list of dioceses that started a working group as a result of the bishop's pastoral letter on racism did not originally include the Archdiocese of Baltimore.

@OlgaMSegura
Show Comments ()
Join the conversation: Login or create an account
Before you can comment, you need to update your profile to include your first and last name, as required in our comments policy. Then reload this page and you'll be set up for commenting. Update your profile
Show Comments ()
Comments are automatically closed two weeks after an article's initial publication. See our comments policy for more.