On All Saints day, we are reminded of our true home 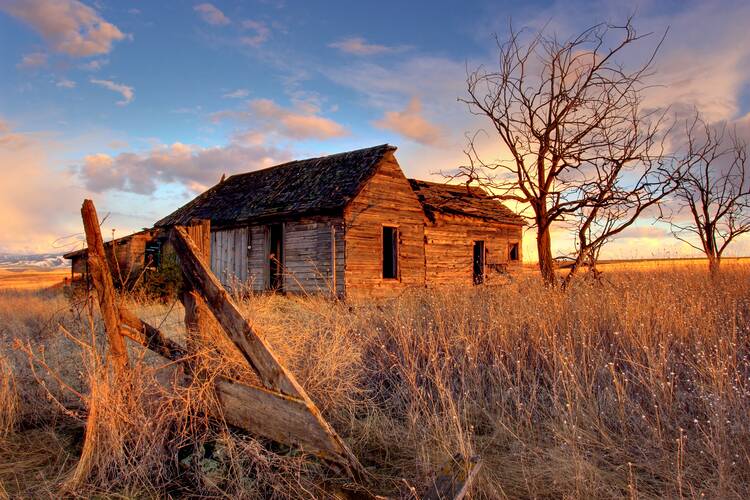 Photo by Timothy Eberly on Unsplash

If you have driven highways between the Missouri River and the Sierra Nevada Mountains, it is a familiar sight in the American West: what is left of a homestead, exposed to the wind and sun, painted wood weathered into grey. Some or all of the structures may have collapsed. What is left is typically surrounded by nigh impenetrable brush, as though the land itself were trying to scab over a wound.

In the second half of the 19th century, a family once made its way to this desolate spot, convinced that it had found its share of the American Eden. What makes these ruined homesteads unique is that they remain standing in mute testimony to those dreams.

In contrast, think of all the fragile hopes that once dwelt on the Lower East Side of Manhattan or on any urban street in America. Time bears us all away. Yet coastal and metropolitan areas, where land values are high, tend to erase all traces of past dreams. Not so on the prairies and the deserts of the American West. The windmill, the house, some trace of a fence or barn, proclaim that someone intended to start a new life at this desolate spot. Only a few trees took root and still live.

Who looks for the seed that died when the mighty tree raises its leafed branches to the sky?

Everything that each of us wants from life, everything that we accomplish, everyone whom we loved fades not only from view but also in memory within the passing of a few decades. In terms of the ages, a ruined homestead represents a human life like Shakespeare’s. Something solid still stands, though the pilgrim has gone. But most of us are like bits of dust in an urban gutter. Who will trace where we began and ended? Who will remember what we were, even to ourselves?

Every feast of the church, like all her doctrines, exists to proclaim and explicate a single relationship: who we are in Christ. In the Solemnity of All Saints, we remember those who have lived and loved before us. Today we rejoice because we know that if they once lived in Christ, if they were baptized into his death so as to share his resurrection, then they are not bare, ruined choirs, not desolate homesteads. They live. Yes, what began here on earth is lost, mostly without a trace. But who looks for the seed that died when the mighty tree raises its leafed branches to the sky?

All Saints Day is not Lesser Saints Day
Terrance Klein

What God sees when he looks upon creation
Terrance Klein

The holy ones who have lived and died in Christ have not become angels in an ethereal heaven. Angels always were and always will be pure spirits, without an iota of flesh. But those who have lived upon the earth, who fed upon the body and the blood of the Lamb, have gone to what we call the New Jerusalem. It is not a place for spirits. It is not a howling wilderness. It is a compact, beautiful city, filled with life and love. It is lush and ever fruitful.

How many pioneers walked the West, looking for a home they could call their own? They did what they had to do, for themselves and their own. Yet the true home they sought was not somewhere beyond the sunset. It came to them from the East, with the rising of the sun, when the Son of Man stepped forth from his tomb.