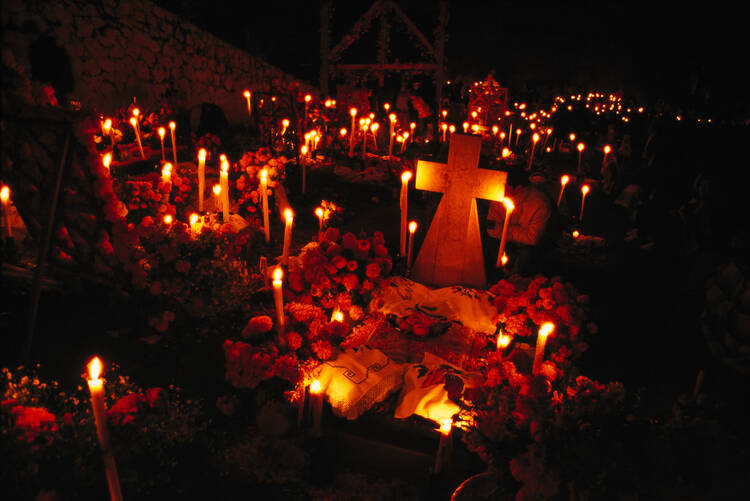 Two long and rather wide wooden banisters dominate the front and back entrances of Saint Joseph School. The structure was built in the 1920s, when no one worried about those whose mobility might be impaired. Entering from the front or the back of the school, you immediately face a choice: Walk down a half flight of six steps to a partial basement floor or climb a full set, 16 of them, to the upper floor.

The banisters may be the only feature of the school that has never been renovated in its century of use. You can see where older students tried, not very successfully, to create groves with their fingernails. If they were not so high and steep, they would be wonderful banisters for sliding. They have been shellacked a few times but have mostly grown smooth under a century of countless small hands.

No one enjoying life with Christ and with his saints has need of our honor.

I can remember what it was like to use them as one ascended, slowly and solemnly, for the first day of class. I also remember how one did not touch them as one flew down those steps when the last bell of the school year announced the arrival of summer. And I can still picture old nuns in habit, slowly and carefully using those banisters to make their way into the fields.

No one can say how many times those banisters have been used. Hands leave so little imprint. Yet think of the souls that have touched them, in this one century, in this one, small Kansas town! Old and young, ascending and descending with excitement, with loathing, with fear, with joy, in tedium and in tremor. For eight or nine years in the life of every student, over the course of a century, those banisters have stood sentinel for ascending saints, because, whether one went up or down, the purpose of the parochial school has always been ascent to God.

We celebrate the Solemnity of All the Saints. So yes, we, hopefully, honor our great-grandparents, who are not included in the canon of saints, the official list created by church officials. But no one enjoying life with Christ and with his saints has need of our honor. Nothing we do can add to or subtract from those who see God. All Saints Day is not “Lesser Saints Day, the Oscars for technical achievement, held off-location and off-camera, a few days before all that glitters.

Today in honoring the saints, we recognize that they have built the church, that they are the church, in a way we, as yet, are not. Their lives have closed; their contribution is complete. The church we have is their work. It would not have come to us without their evangelization, their sacrifices, their sorrows and sufferings, their prayers. What we bestow upon the saints is nothing in comparison with what they have given to us.

Even with so many dead in the Civil War, what Lincoln teaches us about the value of human life.
Terrance Klein

We are a communion of saints because we were born into a communion of saints. We ascend by a banister built by those who have gone before us. Salvation comes to us as the free gift of God because they faithfully shared that very gift with us. Without the saints, Christ would be a small footnote of history. In the lives of the saints, he is their champion, who leads his great host through the centuries, claiming each age for the kingdom.

We are saints, the elect of God, those chosen and set apart, because there have been saints. If we live our lives as saints, if we surrender those lives with each climb of step, there will be saints. Today we simply try to see how past, present and future are a seamless ascent into the kingdom.