There’s a map for that: GoodLands launches Catholic GeoHub

There’s a map for that: GoodLands launches Catholic GeoHub 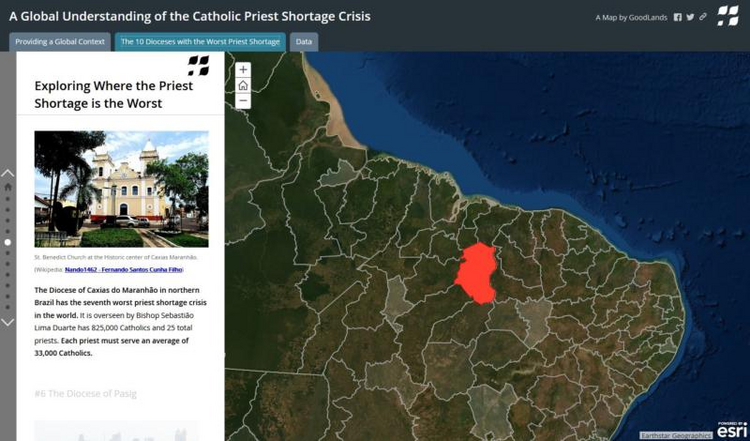 This is a screenshot of the Catholic GeoHub page that explains the priest shortage in the Diocese of Caxias do Maranhao, Brazil, a diocese in the Amazon basin. (CNS photo/GeoHub)

VATICAN CITY (CNS) -- Molly Burhans has a treasure trove of information about the global Catholic Church and she's giving the public the maps to find it.

The young founder of GoodLands, a U.S. nonprofit digital mapping and consulting firm focused on using Catholic land resources to do good for people and the environment, prepared to release more than 100 maps and data sets for free online on the new Catholic GeoHub.

The GeoHub -- catholic-geo-hub-cgisc.hub.arcgis.com -- is the only place in the world where Catholics can see the boundary of every Catholic diocese in the world, map the ratio of Catholic laity to priests, and even check data-based assumptions about the "Catholic carbon footprint."

Burhans used information from the Vatican Secretariat of State and its Central Office for Church Statistics and additional data provided by David Cheney, founder and constant updater of the website catholic-hierachy.org. That gave her the raw material to populate the maps and "map stories" she released. But the computing muscle to create and customize the maps came from the very generous donation of a geographic information system software, known as GIS.

In partnership with Esri, the donor and world leader in GIS technology, Burhans said, "we are not only sharing this data but access to GIS software" for Catholic elementary and secondary schools.

Using maps to understand property holdings, land use possibilities, preservation potential, population density and services available or needed was something Burhans said she assumed the Catholic Church already had.

After all, the Apostolic Palace features a 130-yard-long gallery of maps designed in the late 1500s by Dominican Father Ignazio Danti, the "pontifical mathematician," who also was a noted cosmographer and architect.

"All of a sudden, I realized my job wasn't just to help with the stewardship of that property; it was to help bring church records into the digital age."

So, for Burhans, "it was kind of like I was running up a mountain and expecting to find my people at the top," she told Catholic News Service. Instead "there was nobody there."

She said she was shocked that even large dioceses with many resources "didn't even have Excel sheets" listing their property holdings in one place. "I thought, 'This is crazy.' Our most financially valuable asset, which could be supporting all of our ministries and development, and we don't even know where it is."

"All of a sudden, I realized my job wasn't just to help with the stewardship of that property; it was to help bring church records into the digital age," she said.

Once that digital baseline was established, Burhans and her teams kept layering on more information based on questions dioceses and church organizations were asking, like: Where is the best place to build a new school or a new hospital? Which dioceses have the greatest priest shortage? When a natural disaster strikes, which dioceses need the most help first? What church-owned property needs special attention to protect biodiversity?

The GeoHub is the only place in the world where Catholics can see the boundary of every Catholic diocese in the world.

In mapping the Catholic world, security is a big concern for Burhans; the maps on Catholic GeoHub are not all the maps she has and do not have all the "point scale information" of specific property owned by dioceses, religious orders and Catholic organizations.

In some countries, the physical security of people on the property could be at risk, while in others, identifying undeveloped land owned by the church could lead to land-grab attempts or to exploitation by mineral extraction companies.

At the same time, she said, she urges the church and church organizations to inventory their property and keep records of it. "Land grabs by governments and nonstate actors are a massive problem for the church; the church is hemorrhaging land and resources because of this."

"The largest users of maps are defense departments, followed by industries that deal with resource extraction, followed by conservationists -- so you've got bad, bad, good," she said.

Maps are neutral but have good and bad uses, and when religion is added to the mix the situation becomes even more sensitive, she said, noting just how many wars have been fought over territory or religion.

Maps, they don't love you like I love you.
Zac Davis

Some of the maps are just fun. One of Burhans' newly released maps is as brightly colored as a cake with sprinkles; fittingly enough, it shows the birthdays of the head of every diocese in the world.

"One of our key maps shows the priest shortage around the world," which was a major issue at the recent Synod of Bishops for the Amazon.

Burhans said when she first finished the map, she thought, "This is so sad. There are priests serving over 10,000 Catholics in the global South," while people in the United States, which has an average of 1,875 Catholics for every priest, complain of a priest shortage.

The release of the maps and data could give Catholics "a common ground" for understanding some of the realities the church faces, she said. She hopes it helps "how Catholics see each other and how we understand the global church."