‘We are all responsible’: Bishops urge lifestyle change to protect the Amazon

‘We are all responsible’: Bishops urge lifestyle change to protect the Amazon 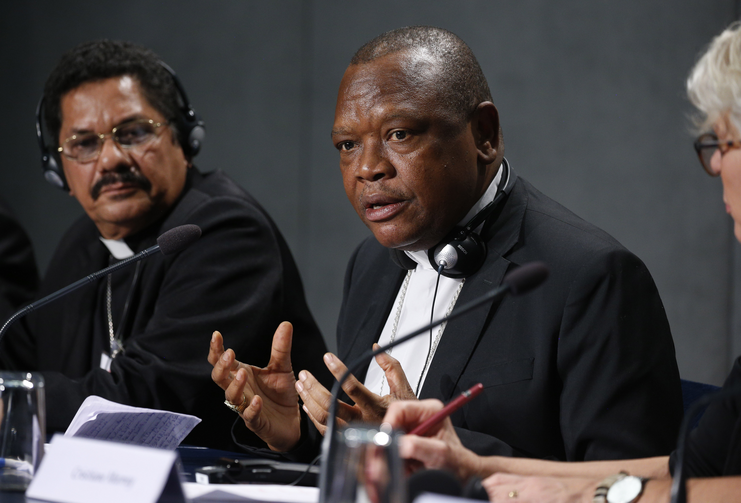 Cardinal Fridolin Ambongo Besungu of Kinshasa, Congo, speaks at a news conference after a session of the Synod of Bishops for the Amazon at the Vatican Oct. 22, 2019. At left is Bishop Karel Choennie of Paramaribo, Suriname. (CNS photo/Paul Haring)

VATICAN CITY (CNS) — Solutions to environmental problems discussed at the Synod of Bishops for the Amazon must involve not just Amazonian nations, but countries in Europe and North America, bishops said.

“This is a special synod, but it has universal consequences,” Bishop Karel Choennie of Paramaribo, Suriname, told reporters Oct. 22.

Many of the environmental issues that synod participants have raised—including destruction of forests, pollution of rivers, rapacious mining and especially climate change—are also common to other tropical regions of the world.

Those problems have roots in North America and Europe, although they often are exacerbated by policy loopholes and lack of enforcement in Amazonian countries, synod participants have said.

Global trade means that even consumers’ decisions leave a footprint in distant countries.

In their four-minute presentations during the first two weeks of the synod, participants described how mines, dams and other enterprises owned, built or operated by companies in industrialized countries displace local communities, affecting the environment and disrupting people's lives.

Global trade means that even consumers’ decisions leave a footprint in distant countries. For example, most of the deforestation in Brazil is for cattle ranching to export beef. Destruction and fires in Bolivia’s lowland dry forest increased after the country signed an agreement that is expected double beef exports to China.

And demand for gold keeps prices high, encouraging illegal miners to invade indigenous people's territories in remote parts of the Amazon. Their unregulated operations leave a scene that resembles a cratered moonscape, where rivers are poisoned with mercury and cyanide.

“No one can say, ‘I’m not responsible, it’s not my fault,’” Bishop Choennie said. “We are all responsible.”

“No one can say, ‘I’m not responsible, it’s not my fault,’” Bishop Choennie said.

But that is a message people in industrialized countries do not always want to hear, Bishop Emmanuel Lafont of Cayenne, French Guiana, told Catholic News Service.

When he returns to France for visits, he said, he often finds it difficult to interest other people, even in the church, in problems facing indigenous people in his diocese.

“They know very little” about French Guiana, Bishop Lafont said. “They live a very comfortable life compared to the Third World, and they are not aware—they are afraid of becoming aware— that their wealth has been made from the colonizing process.”

Except for French Guiana, the Amazonian nations won independence from the countries that colonized them, but economically they continue to depend heavily on revenues from raw materials such as minerals, oil and timber, or on industrial-scale farming and ranching.

The economic and social costs are borne by indigenous villagers and small farmers in the Amazon, said Josianne Gauthier, executive secretary of CIDSE, an international consortium of Catholic development agencies and an invited guest at the synod.

“It’s colonialism—you externalize the costs to another population that you consider inferior or of less value.”

“It’s colonialism—you externalize the costs to another population that you consider inferior or of less value,” she said. “It’s a one-directional relationship, where you exploit and live well, while the others suffer the consequences.”

People in places like North America and Europe do not always see that “environmental degradation and human rights violations [in the Amazon] are connected to our behaviors or policies or trade agreements” elsewhere in the world, she said.

That is because “they’re afraid of listening from the point of view of the other,” Bishop Lafont said.

In South Africa, where he served as a missionary for 13 years, “there is a proverb that says when lions [tell] the stories, the history of the hunt will be different,” he said.

People begin to understand the impact of their consumer choices and the policies of their countries when they come face to face with the people who are affected, he said.

Synod participants who have never seen the Amazon have told Bishop Lafont that they would like to visit his diocese. Gauthier’s organization takes people from countries like those in the Amazon to talk with policymakers in places like Europe and North America.

Ultimately, however, the Gospel, Pope Francis’ encyclical “Laudato Si’” and the synod all are calling for a profound conversion, synod participants said.

“Europe wants the Amazonian people to keep their forest [standing], but they don’t want to change their lifestyle. That’s a big contradiction,” Bishop Choennie said.

The Amazon synod is halfway over. Here’s what we know so far.
Luke Hansen, S.J.

“This economy kills,” he added. “This economy is unjust for the next generation,” which will inherit the consequences of global warming and other environmental problems.

The call to an ecological conversion will reverberate after the synod officially ends Oct. 27, participants said.

“It can’t stop here,” Gauthier said. “We have to take it into our territories. There has to be solidarity for what’s going on in the Amazon, and the messages have to change.”

Bishop Lafont said Catholics “have to take ‘Laudato Si’’ more seriously. We have to promote a change in the way of living. Concretely. That will be my message.”

Think I'm going to my local Argentine steakhouse tonight ... in my SUV ... and drink a good Chilean wine to economic prosperity in the Amazon basin that comes from building dams and other infrastructure. How did so many anti-capitalist Rousseaun nature boys manage to assemble at one time in Rome?

I urge this magazine to add up the fossil fuel airplane bills of the many Pope Francis flights and list whether he could have simply done a big screen appearance via Facetime or Skype...in a stadium of each country.

The bishops are rather amazing in the sense that for a group of people who do not have to work for a living but who receive their income from those who do work, they are very quick to envision themselves as representative of higher authority on all issues and spend their time promoting this power.....Now, if only the adults in the room would gather to discuss the problems facing the region then perhaps viable solutions could be obtained....( If I have issues with politicians, I admit to having a severe difficulty with church politicians)....And who will be in charge of this change in the way of living? The bishops will manipulate Scripture to get what they want, to win. This is not at all about God but is only about the use of available power. Do not error in automaticallly ascribing either The Spirit or Good Faith to those who desire this power and control for this tends to be the the method more used by demagogues than people of good will.

The environmental issues in the "Amazon" are indeed typical of and representative of many other regions around the globe.

We are not to blame and we are not necessarily responsible for attempting to provide solutions.
None of us, now or ever.
Some might have a vocation of repair or healing or pioneering new ways of living.

Creation belongs to God and He is to blame for it and responsible for how it goes from the beginning to the end. He tells us that it is very good, from beginning to end I assume. Julian of Norwich tells us that all will be well, her "Revelations of Divine Love" could well be the missing and essential reading for these sadly mistaken bishops.

We are of creation, we dwell partially within creation and have been well and truly informed that it is not permanent.
It will end.
There will be a new creation.
We are not creators of the new creation, that creation is of God, Father Son and Holy Spirit.

Religious patriarchy and the ecological crisis are tightly coupled. We must become both post-patriarchal and agro-ecological. As long as the church remains patriarchal, the call to "ecological conversion" is not compelling. It is time to ordain women to the priesthood and the episcopate. Proposal for a dogmatic definition:

If any person says that women do not have the same human nature assumed by Christ at the incarnation, or that women are not consubstantial with Christ as to his humanity, and therefore women cannot be sacramentally ordained to become successors of the apostles, let that person be anathema.

The jungle which is the lungs of the world and pristine virgin forest in the popular imagination is not factually either.
This is on topic and pertinent.

The invaders of the continents of N and S America have been in the Amazon for at least the last 8,000 years.
They have been managing it as a food forest, a lived-in environment for at least that length of time. They utterly changed it in the service of their survival, and that was not a crime nor a mistake nor an evil.

There were about 500 million people in the world at the time of European contact, migration and invasion and about 8 million indigenous people lived in the Amazon at that time.

Now that we are more than seven thousand seven hundred millions worldwide, some calculations would suggest we should be given refugee status in the Amazon by them.