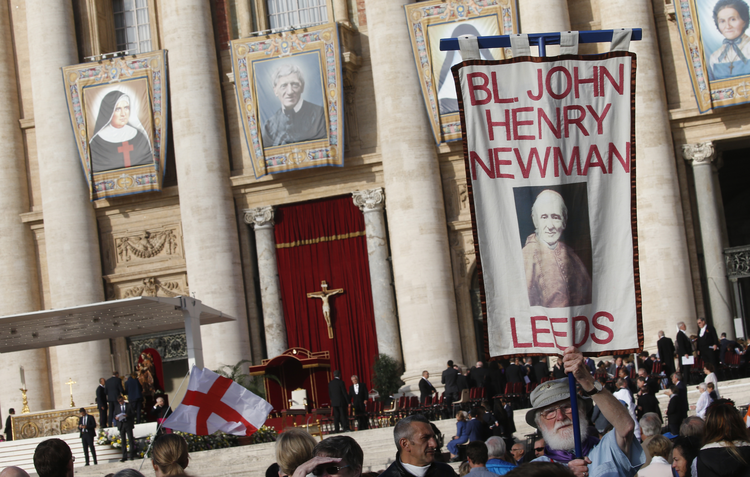 I have been following St. John Henry Newman around for a number of years. In 2007, I travelled to Oxford, England for a conference and spent my last night there in the community he founded in Littlemore, on the outskirts of the city. When he was an Anglican, Newman started the community for himself and some friends as a place for prayer and study. Here Newman wrote his famous An  Essay on the Development of Christian Doctrine, and here Newman was received into the Roman Catholic Church in 1845.

In 2011, I returned to the United Kingdom and, this time, received permission to stay at the Oratory Newman founded in Birmingham in 1849. I spent time in Newman’s beautiful library, filled with books by early Christian writers. I re-read Newman’s autobiographical recounting of his conversion, Apologia Pro Vita Sua, a few feet away from the desk on which he wrote it. And I saw his private room, which contains the altar his fellow Oratorians built for him after he was made a cardinal by Pope Leo XIII in 1879. I was moved to see the photos of family and friends surrounding the altar, for whom he would pray as he offered Mass each day.

Like Newman, I am a convert to Roman Catholicism, but it is the way Newman converted that is most important to me.

And on Oct. 13, 2019, I followed Newman to Rome for his canonization by Pope Francis.

I arrived in Rome a few days prior to the canonization and was surprised to see the number of pilgrims in the city here for the numerous events planned to celebrate the occasion. Newman is an important figure for me theologically and spiritually, and I certainly knew that others have been similarly transformed by him. But it was moving to be in visible community with so many who shared my devotion to the saint.

On the morning of the canonization, I arrived at St. Peter’s Square early, just as the security checkpoints were opening. In the queue with me were pilgrims from the United Kingdom and the United States, including some Oratorians in formation from Pittsburgh, but there were also pilgrims from India, Brazil and Switzerland. Four women were to be canonized alongside Newman, and while the majority of people in the square were there for the canonization of Newman, thousands of pilgrims were in there for these four women.

At the security checkpoint, I talked with some young Indian sisters from the Congregation of the Holy Family who were there to celebrate the canonization of their foundress, Mariam Thresia Chiramel Mankidiyan, a mystic who experienced visions and the stigmata and whose reputation for holiness made her tomb a site of pilgrimage.

Around my seat in the square were Brazilian pilgrims there for the canonization of Dulce Lopes Pontes, a woman who devoted herself to the poor and whose body was discovered incorrupt. As we waited for the Mass to begin, the Brazilians entertained us with chants and songs.

Near me also were Swiss pilgrims here for Marguerite Bays, a laywoman and mystic who was miraculously cured of bowel cancer on the day that the dogma of the Immaculate Conception of Mary was proclaimed by Pope Pius IX in 1854. She regularly received the stigmata as a sign of the degree to which she identified with the suffering of Christ.

And there were Italian pilgrims present for the canonization of Giuseppina Vannini, a Roman woman who heard the voice of God regularly and founded the Congregation of the Daughters of Saint Camillus.

The canonizations took place early in the Mass. After the singing of “Veni, Creator Spiritus,” Cardinal Giovanni Angelo Becciu, the prefect for the Congregation for the Causes of Saints, made a formal petition to Pope Francis to declare these five people as saints, and he read brief biographies of each. And after we sang the Litany of the Saints, Pope Francis made the declaration that so many of us had travelled to hear:

For the honor of the Blessed Trinity, the exaltation of the Catholic faith and the increase of the Christian life, by the authority of our Lord Jesus Christ, and of the Holy Apostles Peter and Paul, and our own, after due deliberation and frequent prayer for divine assistance, and having sought the counsel of many of our brother Bishops, we declare and define Blessed

to be Saints and we enroll them among the Saints, decreeing that they are to be venerated as such by the whole Church.

As I listened to this formula of canonization and looked at the portrait of Newman hanging from the facade of St. Peter’s Basilica, I could not help but think about how Rome was not a city where Newman felt entirely at home. Newman’s study of and devotion to the patristic period of the church foreshadowed the church’s turn to the fathers at the Second Vatican Council, as did his arguments regarding doctrinal development and the formation of conscience. But in the 19th century, such things were often associated with liberalism and modernism, and both were viewed as great dangers to the church.

There is a humility in Newman that allowed him to make himself known and vulnerable to the people around him.

So it was fitting, even satisfying, to hear Pope Francis declare Newman a saint on the footsteps of St. Peter’s Basilica in the presence of tens of thousands of pilgrims whose lives have been transformed by Newman’s life and writings.

When I told people I was coming to Rome for Newman’s canonization, I was asked often what it is about him that most appeals to me. Like Newman, I am a convert to Roman Catholicism, and his story of conversion resonated, and still resonates, with me. However, it is the way Newman converted that is most important to me. Too often I come across converts to Catholicism whose approach to their former tradition is negative and who view their new faith in triumphalist ways. While acknowledging what he perceived to be the shortcomings of Anglicanism, Newman was nevertheless keenly aware of how much he had been shaped by the Anglican tradition, and he was grateful for it.

Like Newman, I was drawn to early Christian writers from the patristic period. And like him, my understanding of theology, the sacraments and the church was shaped by this reading. Newman is rightly seen as a huge influence on Vatican II in no small part because of the emphasis he placed on the example and witness of the early church during the patristic period. This was a witness that the fathers of Vatican II took very seriously, so when I read the documents of Vatican II as someone contemplating becoming Catholic, I saw a church that looked familiar. The fingerprints of the patristic writers were all over those documents, but so too were Newman’s.

Ultimately, however, Newman appeals to me most on a level that goes deeper than just the intellectual or theological. Despite the fact that Newman lived more than 100 years ago, I cannot help but feel a nearness to the saint when I read him or his life. His writings, particularly his autobiography, are texts that I return to over and over again.

Perhaps the best way to describe what Newman means to me is to quote the words of Thomas Merton, the U.S. Trappist. Newman was for Merton an incredibly important and influential thinker, and in his Conjectures of a Guilty Bystander, he described what Newman meant to him: “There are people one meets in books or in life whom one does not merely observe, meet, or know. A deep resonance of one’s entire being is immediately set up with the entire being of another.”

There is a humility in Newman that allowed him to make himself known and vulnerable to the people around him. I feel I have come to know Newman profoundly by reading him, and I have also come to know and understand myself in the process.

When he was made a cardinal, Newman chose as his motto “Cor ad cor loquitur,” which means, “Heart speaks unto heart.” He was speaking about his relationship to God, but his motto also reflects the profound way that Newman’s writings continue to communicate with people like me.

Newman is the greatest modern "Doctor of the Church," because his was the greatest 19th century inspiration of the Second Vatican Council. His books need to be read and reread, in order to understand the dialectic that the Church is following to this day, regarding her interpretation of Sacred Scripture and her interpretation of her own tradition, as it has been guided through changes by a "Holy Spirit." The most important of these texts is "The DEVELOPMENT of Doctrine," and it's because of that book that Pius IX would never have made him a cardinal, but the Leo XIII would.

Thank you, Gregory.
I particularly value your drawing attention to the appreciation and value that St JHN had for his Anglican inaugurated faith and fellow Anglican Christians.

Why the silence on the pinoeering LGBTQ activist that Cardinal Newman was? He was living with his partner, Fr. Ambrose and because he was from an anglican background a conjugal relationship for a priest didn't appear extraordinary to him. It doesn't make a difference if a marriage is gay or straight.
Cardinal Newman even in death was a committed husband, and gave specific instructions, fearing that the church might try to separate him from Fr. Ambrose once it figured our the nature of their relationship and uncover some evidence to that effect, that he be buried with SPECIAL DECOMPOSING SOIL IN the grave of Fr. Ambrose! so that their bodies would be together , decompose together and not be seperated in death.!!

This was discovered in 2008, when the Vatican ordered that the bodies be separated & an empty grave was found, with the bodies having decomposed! Some research in local sources, revealed that a journalist who attended the funeral of cardinal Newman, wrote in a Birmingham newspaper that Cardinal Newman had ordered that special decomposing soil be used so that he not be separated from his lover, Fr Ambrose.

The greatest gift to the great Cardinal Newman would be to respect his last wishes and honour his relationship. Cardinal Newman is no less a theologian or philosopher because he was gay!