Here’s what happened on the first day of the Amazon Synod. 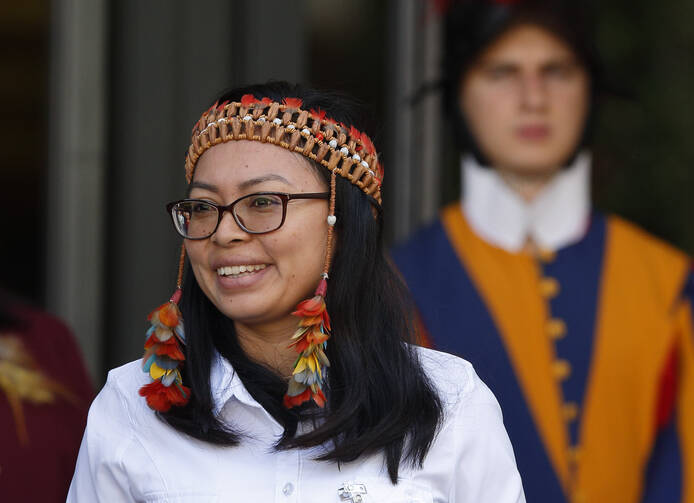 Leah Rose Casimero, an indigenous representative from Guyana, leaves the first session of the Synod of Bishops for the Amazon at the Vatican on Oct. 7, 2019. (CNS photo/Paul Haring)

The Synod of Bishops for the Amazon officially opened with a Mass in St. Peter’s Basilica on Sunday morning, but the first two plenary sessions—called “general congregations”—took place Monday morning and afternoon. Here are a few highlights:

Pope Francis opened the first plenary session by leading prayer near the tomb of St. Peter. A small choir sang the ancient hymn Veni Creator Spiritus (“Come, Creator Spirit”); representatives of Amazonian indigenous groups placed a canoe, fishing net, lit candles and relics of Amazonian martyrs on the ground in front of the tomb; and then the entire group, singing, processed with the objects to the synod hall.

In a speech, the pope encouraged the synod participants to proceed with a “pastoral heart,” to see and interpret the reality of Amazonia with the “eyes of a disciple.” Speaking of inculturation, the pope lamented the failures of “prefabricated programs for ‘disciplining’ the Amazonian peoples,” and he urged a different approach adopted by such missionaries as Jesuits Roberto de Nobili in India and Matteo Ricci in China and many others.

Cardinal Lorenzo Baldisseri, who runs the general office of the Synod of Bishops, announced in a speech several measures undertaken by the synod organizers to ensure that the synod assembly itself is a sign of “integral ecology” and care for our common home: an online registration process (saving printed paper); bags, pens and cups made with biodegradable material (no plastics used); and most significantly, to be a “carbon neutral” synod, offsetting the emissions spent to get more than 200 participants from South America to Rome—estimated at 572,809 kilograms of carbon dioxide—with the purchase of 50 hectares of new growth forest in the Amazon.

The cardinal also announced that, beginning with the afternoon plenary session, synod members would be allowed to wear clerical suits rather than cassocks. Applause ensued. Also, unlike past synods when the experts and auditors were relegated to the back few rows in a corner of the Synod Hall, in this synod they appear to be scattered throughout the back half of the assembly.

The general relator of this special synod emphasized several themes: the church must “throw open her doors”; “true tradition” is “the church’s living history”; and “God always brings newness,” so “one must not fear what is new.”

'In an introductory report to the synod, Cardinal Claudio Hummes, O.F.M., the retired archbishop of São Paulo, Brazil, and general relator of this special synod, emphasized several themes of Pope Francis’ pontificate: the church must “throw open her doors”; “true tradition” is “the church’s living history”; and “God always brings newness,” so “one must not fear what is new.” In his conclusion, he suggested a number of “core issues” of the synod: a church that goes out and creates new pathways; the Amazonian face of the church, inculturation and interculturality; ministries in Amazonia and the role played by women; integral ecology and listening to the earth and the poor; the church in urban reality; and issues concerning water.

At the Vatican press briefing which followed the morning session, Alba Teresa Cediel Castillo, M.M.L., of Colombia, a member of the Missionary Sisters of Mary Immaculate of Saint Catherine of Siena, spoke of the “great joy” she feels in her heart to represent indigenous women, campesino women, women who live in great urban areas and also religious women at the synod. She is one of 10 representatives of the International Union of Superiors General, the leadership organization that represents 500,000 religious sisters and nuns who largely work on the frontiers.

Sister Castillo described the many challenges faced by women in the Amazon: the great distances they cover; forced migration due to drug trafficking, poverty and other factors; and problems related to extractive activities like mining. There are “high expectations” and “infinite hope” that the synod is “ready to listen to the voices of indigenous peoples, campesinos,” including women who will “make their voices heard,” she said.

In response to a question about whether she is satisfied with the way women have been part of the synod process and whether it is enough, Sister Castillo responded that the synod’s preparatory process has been “incredible” since it has involved “the great participation of indigenous people, young children, adults” as well as “young sisters and the eldest sisters” who have worked in Amazonia.

She said there is a “great and fertile” presence of women in the Amazon forests and, since there are few priests, women baptize children and preside at marriages. She added, “Sometimes we also have to listen to confessions. Of course, we cannot give absolution, but we place ourselves in a position of humbleness, listen to the person and give a word of comfort, perhaps before death.”

The role of women in the church “has to become greater,” she said. “We will get there, little by little. We cannot exert too much pressure, but through dialogue and meetings, we will be able to respond to the many challenges.”

Pope Francis opens Amazon synod, says to ‘light the fire of the Gospel’ in the region
Gerard O’Connell

In the Amazon, Pope Francis is setting the agenda for a new kind of synod
Luke Hansen

According to a Vatican News summary of the afternoon plenary session, synod participants discussed the need for inculturated celebrations of some sacraments, and a proposal was put forward “to think of establishing—ad experimentum and according to the right theological, liturgical and pastoral discernment—an Amazonian Catholic rite to live and celebrate faith in Christ.”

Several interventions raised concerns about the massive industrial mining activities in the Amazonian region and the need to protect aquifers from contamination. Participants also reflected on the importance of stopping the use of fossil fuels, especially among the main polluters in the most industrialized countries; and the leadership of young people in integral ecology. The young Swedish activist Greta Thunberg and the Climate Strike initiative were specifically named.

The theme of ecology, according to the Vatican News summary, “must be perceived by the Church as a positive challenge, as an exhortation to dialogue with young people, helping them in the right discernment so that their commitment to safeguard Creation is not only a ‘green and fashionable’ slogan, but that it really becomes a question of life and death, for humans and for the planet.”

Some of the interventions focused on the question of the ordination of married men. It was described as a “legitimate need” but one which “cannot affect a substantial rethinking of the nature of the priesthood and its relationship with celibacy” in the Latin rite.

And it is the below self-loathing of women by women that causes the ongoing oppression of women.

"The role of women in the church “has to become greater,” she said. “We will get there, little by little. We cannot exert too much pressure, "

Why can't women exert plenty of pressure? Because it will upset the pope and men of the hierarchy? Too bad!

Change needs to happen now! Now is always the righteous time to bring forth justice and end hatred and oppression. Same ordination, starting with ordained priesthood for women now and you can keep the priesthood celibate until this happens. Women's dignity must come before greater privilege for married men. Gender segregation is grave sin!

You need more priests? Its urgent?! Ladies first before married men, otherwise we sin as a people and only evil comes from sin.

Right again, Nora. Here are a few more crumbs for women. Just be patient and QUIET for a few more 100 years/

With much due respect, the role of "women"? Let us be clear. Female vowed religious are second tier clerics. Their voices reflect that privilege, and do not inclusively reflect "women".

Let us pray for the ordination of celibate women to the priesthood and the episcopate. For your consideration:

Is this a synod, or a coven?

I want to be there when ya'll explain to the Queen of Heaven, whos holiness, dignity and station surpasses all angels and saints combined, that in order for women to be properly treated they must be ordained.