As Amazon Synod begins, Pope Francis looks to proceed with a ‘pastoral heart’

As Amazon Synod begins, Pope Francis looks to proceed with a ‘pastoral heart’ 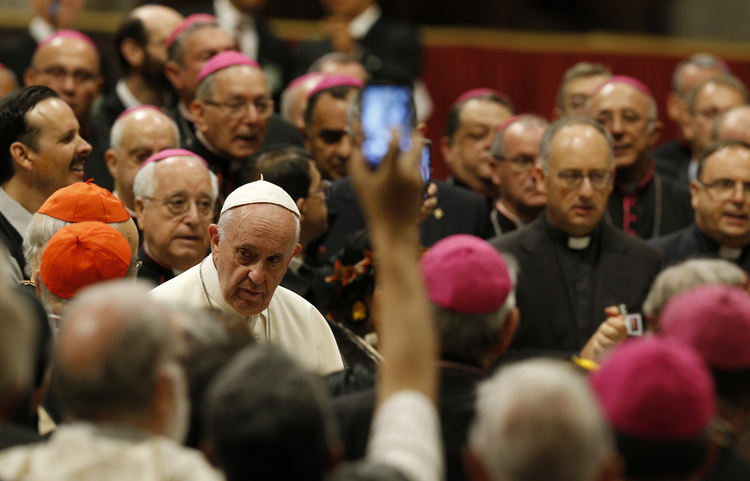 Pope Francis participates in a prayer service in St. Peter's Basilica at the start of the first session of the Synod of Bishops for the Amazon at the Vatican Oct. 7, 2019. (CNS photo/Paul Haring)

Pope Francis opened the first plenary session of the synod for the Amazon region this morning by praying with the synod participants at the tomb of St. Peter in the basilica dedicated to his name and then gave an incisive speech to offer some direction to guide them over the next three weeks.

The pope told the 185 synod fathers (that is men with a right to vote) and the other participants that “the pastoral dimension is the essential one, that comprises all.” He explained, “We approach the reality of Amazonia with a Christian heart, we see it with the eyes of a disciple to understand it and interpret it with the eyes of a disciple [of Jesus] because there are no neutral, aseptic hermeneutics [modes of interpretation]; they are always conditioned by a prior option.” He emphasized that the synod participants’ “prior option” is “that of disciples,” appearing to rebut criticisms of the synod made by some prelates and others.

Pope Francis: The synod’s way is to “bring us close to consider the Amazon reality with this pastoral heart, with the eyes of disciples and missionaries.”

He said the synod’s approach is the missionary option “because the love which the Holy Spirit puts in us moves us to the proclamation of Jesus Christ” but in a way that “should not be confused with proselytism.”

The synod’s way is to “bring us close to consider the Amazon reality with this pastoral heart, with the eyes of disciples and missionaries.” He told them that in the synod they are to move “close to the Amazonian peoples on the tip of our toes, respecting their history, their cultures, their style of good living in the etymological sense of the word, not in the social sense which oftentimes damages them.”

He reminded them that all of these Amazonian peoples “have their own entity,” “their own wisdom, consciousness of self” and “a way of seeing reality, a history, a hermeneutic” that makes them “tend to be protagonists of their own history with...these qualities.”

He said the synod must approach these peoples in a way that is “far from the ideological colonizations that are common today—which destroy or reduce the particular characteristics of the peoples.”

He said the synod must “come close to them without the entrepreneurial haste” that comes with “prefabricated programs for ‘disciplining’ the Amazonian peoples, disciplining their history, their culture...to domesticate the original peoples.” Pope Francis said that when the church forgets this, it does not enculturate the Gospel and shows contempt for the people, and this results in “the failures which today we lament.” He urged participants to think of the different approach adopted by such missionaries as Jesuits Roberto de Nobili in India and Matteo Ricci in China and many others.

The synod opened in a most remarkable scene. Pope Francis stood in front of the tomb of St. Peter as a small choir intoned the Veni Creator—the hymn invoking the enlightenment of the Holy Spirit, surrounded by the more than 200 participants of the synod.

It was a profoundly spiritual and emotional moment as everyone present was aware of the great importance of this synod.

Representatives of the indigenous people of the Amazon wearing their traditional dress were present along with many others who had come to Rome to highlight the Amazonian reality with various public events during these three weeks. They placed a canoe with lighted candles, a fishing net and the relics of the martyrs of the Amazon region on the ground in front of the tomb of the apostle Peter and his successor—Pope Francis.

It was a profoundly spiritual and emotional moment as everyone present was aware of the great importance of this synod, not only for the region and the church there but also for the whole world.

When the singing ended, Pope Francis said a prayer in Spanish asking God to give participants “the Spirit of intelligence, truth and peace so that they may know what is pleasing to You and have the courage to realize it.”

After that all the synod participants processed from the basilica to the synod hall, singing songs from the region including “Los Hijos de la Selva” and “Padre Amerindio.” They carried the canoe, the fishing net and the relics in procession, together with posters bearing the photos or images of the martyrs of the Amazon region as well as some from Latin America, including St. Oscar Romero.

When they reached the entrance to the synod hall, representatives of indigenous communities gave the canoe, the net and relics as gifts to the pope, while they placed the posters in front of the main podium in the synod hall. Then all the synod participants entered the semi-circular hall and took their seats for the start of the three-week synod.

Pope Francis began his address in Italian, but then to great applause, he switched to Spanish, reading from a text he had written himself. He highlighted what he called “the four dimensions of the synod: the pastoral dimension, the cultural dimension, the social dimension and the ecological dimension” and concluded by asking the synod fathers “to protect” the synod process by not divulging to the media what is said inside the synod hall.

He described ideologies as “a dangerous tool” and noted that “we always tend to adopt an ideology to interpret a people. He said, “Ideologies are reductive and lead us to exaggeration in our pretension to intellectually understand [a people] but without accepting, to understand without admiring...so the reality is received in categories, the most common are the categories of the ‘isms.’” He mentioned such “isms’ as “indigenousism” and “developmentalism,” which “reformulate life from the illustrious and enlightened laboratory and use words like ‘civilization’ and ‘barbarity’ that serve to divide, to annihilate peoples.”

He said he has seen this “contempt” for the original peoples in his own country, Argentina. He said he had seen it, too, here in Rome, even yesterday, and said, “I was pained to hear a sarcastic comment about a pious man with feathers on his head who brought gifts at the offertory of Mass” in St. Peter’s Basilica.

Clearly upset by this remark, Francis said: “Tell me, what’s the difference between having feathers on your head and the three-peaked hat worn by certain officials in our dicasteries?” His words drew loud applause.

“Tell me, what’s the difference between having feathers on your head and the three-peaked hat worn by certain officials in our dicasteries?”

Pope Francis warned the synod’s participants against approaching the peoples of Amazonia “simply with pragmatic measures.” Instead, he said, “we need contemplation of the peoples, a capacity for admiration.” He added, “If one comes with pragmatic intentions then let that ‘sinner’ pray; let him be converted and open his hard to a paradigm perspective that is born of the reality of the peoples.”

He told the synod fathers, “We have not come here to invent programs of social development or of the custody of culture, of the museum type, or of pastoral actions of the same, non-contemplative style with which they are carrying out actions of the contrary sign: deforestation, uniformization, exploitation.”

These latter, he said, “make programs that do not respect the poetry—allow me to use the word, the reality of the peoples who are sovereign.” He told the synod participants: “We have come to contemplate, to understand, to serve the peoples. We do it in a synod because a synod is not a parliament or a talk shop; it is not to demonstrate who has most power over the media and who has most power over the [social] networks to impose some idea or some plan.”

He said the synod approaches the Amazonian reality by “walking together under the inspiration and guidance of the Holy Spirit. The Holy Spirit is the principal actor of the synod. Please, let us not throw it out of the hall.”

He urged participants to “pray much” then “reflect, dialogue, listen with humility."

He recalled that there had been much consultation and discussion in episcopal conferences and in the pre-synod council as the working document was drafted. He described it as a “martyred text,” “destined to be destroyed because it is the point of departure so that the Spirit can work in us and, now, let us walk together under the guidance of the Holy Spirit.”

He urged participants to “pray much” then “reflect, dialogue, listen with humility, knowing that I do not know all. And speak with courage, with parrhesia, even if one is ashamed to say what one thinks, to discern and to do all that within [the synod], maintaining the fraternity that should exist in it.”

Pope Francis opens Amazon synod, says to ‘light the fire of the Gospel’ in the region
Gerard O’Connell

He called on participants to protect the synod process and its fraternal atmosphere, suggesting that they should “not ventilate everything outside.” There are press briefings for giving information, he said. He reminded them that “a synodal process can be ruined a little if I go out from the hall and say what I think,” acting with imprudence. If they do this, he said, then it can happen as it did in the past that there is ‘the synod within’ and ‘the synod outside’ with two different stories.”

He concluded by asking the synod fathers to “pray for each other, have courage and please do not lose the sense of humor.”

In keeping with the meeting’s environmental message, the synod organizers themselves are taking measures to reduce their own carbon footprint, according to The Associated Press.

Organizer Cardinal Lorenzo Baldisseri told the bishops there would be no plastic cups or utensils at the meeting, that synod swag such as bags and pens were biodegradable and that the emissions spent to get more than 200 bishops and indigenous from South America to Rome—estimated at 572,809 kilograms of carbon dioxide—would be offset with the purchase of 50 hectares of new growth forest in the Amazon.

Not much to care about in this Synod. We have already proven there is no Christian heart in this synod's structure because misogyny and the refusal to treat women with the same respect and human dignity as men by not allowing them equal votes or any decisive voice, or any vote is present from the start. Nonsense will get treated like nonsense - do something that matters! End the hate, or no one is going to care what you are babbling about in front of the gigantic pink elephant, hanging out in the corner of the room, you are so desperately trying to ignore.

What is a pastoral heart? What is the end result of this synod? Has it been already determined?

I really hope this group is open to the actions of the Holy Spirit to effect some positive dynamic change within the wider Church so the Church can respond faithfully to the current dilemma that is in front of them.

One can only hope and pray 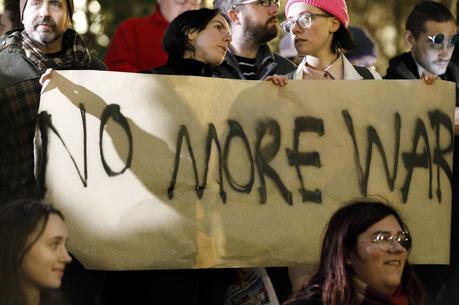 The Editors: Congress must limit the president’s war powers
The killing of General Suleimani is only the latest—and by no means unique—example of reliance on an A.U.M.F. long after its passage and far outside its reasonable scope.
The EditorsJanuary 24, 2020