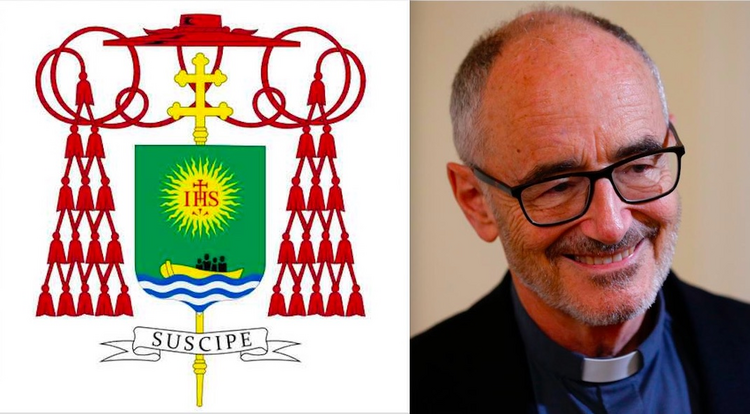 The personalized coat of arms, motto and pectoral cross of the newly consecrated Archbishop Michael Czerny, S.J., who will receive a red hat at a consistory for new cardinals on Oct. 5 in Rome, demonstrates his commitment to care for creation and the protection of migrants and refugees.

The cross is made from a piece of a wooden boat used by migrants to cross the Mediterranean to land on the island of Lampedusa.

The cardinal-designate, who was ordained a bishop by Pope Francis on Oct. 4, earlier that day tweeted a photo of his unique pectoral cross, made from a piece of a wooden boat used by migrants to cross the Mediterranean to land on the island of Lampedusa near Sicily. The artist is Domenico Pellegrino of Sicily.

In July 2013, Pope Francis made his first official trip outside of Rome to Lampedusa to demonstrate his closeness to migrants and to decry a “globalization of indifference.” In his homily on the island, Pope Francis repeatedly asked whether “any one of us has wept” for migrants and those who have died in the Mediterranean.

According to a description of the coat of arms provided by Archbishop Czerny, the green color of the shield represents the commitment to care for creation, our common home, expressed in Pope Francis’ encyclical “Laudato Si’.” Upon the green field is the seal of the Society of Jesus, which Czerny entered on Aug. 14, 1964. The seal is a yellow sunburst that bears the monogram IHS—the first three letters of the Greek name of Jesus—with a cross and three nails.

The green color of the shield represents the commitment to care for creation, our common home, expressed in Pope Francis’ encyclical “Laudato Si’.”

To signify Archbishop Czerny’s ministry since 2017 as undersecretary of the Section for Refugees and Migrants in the Vatican’s Dicastery for Promoting Integral Human Development, the lower portion of the shield depicts a yellow boat that is carrying a family of four. The official description continues:

The boat evokes a common means for displaced persons to seek a better life in another location. It is also a traditional image of the Church, the Bark of Peter, which has a mandate from Our Lord to ‘receive the foreigner’ (Mt 25:35), regardless of where the Church finds herself. Further, like the symbol of the L’Arche movement, the boat is a reminder of the works of mercy towards all who are excluded, forgotten or disadvantaged.

The water under the boat represents the Atlantic Ocean, which Archbishop Czerny crossed with his family when they immigrated to Canada from Czechoslovakia in 1948.

In a recent interview with America, the new cardinal explained how his personal experience as a child refugee at the age of 2 has affected his outlook and current ministry: “I’ve found that...when I hear the Holy Father say that we should welcome, protect, promote and integrate [migrating people], I translate that back into our experience as a family...and I realize the truth of what he is saying and I realize how those dimensions were realized for good or for less-good in our lives.”

For his motto, the new cardinal has chosen a single word: Suscipe.

For his motto, which is placed on a scroll below the shield, the new cardinal has chosen a single word: Suscipe. This Latin word is the first word of the well-known prayer in the Spiritual Exercises of Saint Ignatius Loyola that begins: Suscipe, Domine, universam meam libertatem (“Take and receive, Lord, all my liberty”). The prayer is part of the final contemplation of the Exercises, called “The Contemplation of Divine Love.”

The description of the cardinal’s coat of arms reads: “It is in the words of this prayer that a person submits, in total surrender to God, what is most precious of all that God has given to him or her, for whatever use God considers most fitting. The word suscipe also evokes the Lord’s command to ‘receive’ the foreigner, for ‘I assure you, as often as you did it for the least among you, you did it for me’” (Mt 25:40).

The water under the boat represents the Atlantic Ocean, which Archbishop Czerny crossed with his family when they immigrated to Canada from Czechoslovakia.

Also featured in the coat of arms are the red pontifical hat, called a galero, with its 15 tassels in five rows on each side; and the yellow processional cross of an archbishop. Church law requires that any new cardinals who are not already bishops must receive episcopal consecration.

The highly symbolic choices of Archbishop Czerny reflect the pastoral priorities of Pope Francis, who in a letter to the new cardinals explained what this responsibility really means: “The Church asks you for a new form of service…a call to a more intense personal sacrifice and a consistent witness in life…. May this new phase of your life help you emulate Jesus more closely (Mt 9:36; 14:14; Lk 7:13) and increase your capacity to feel compassion for all men and women who, made victims and slaves by so many evils, seek with hope a gesture of tender love from those who believe in the Lord.”

In a ceremony on Oct. 5 in Saint Peter’s Basilica in Rome, Pope Francis will create 13 new cardinals, including 10 cardinal-electors under the age of 80. In addition to Archbishop Czerny, two other Jesuits are being made cardinals: Archbishop Jean-Claude Hollerich, S.J., of Luxembourg, who is 61; and Archbishop Emeritus Sigitas Tamkevičius, S.J., of Kaunas, Lithuania, who is already 80 and thus not eligible to vote in a conclave.

According to church law, cardinals are to be “truly outstanding in doctrine, virtue, piety and prudence in practical matters,” and they make up a special college whose responsibilities are to elect the Roman Pontiff and to assist the pope in dealing with “questions of major importance” and his “daily care of the universal Church.”

Yup. Love for immigrants entering a country illegally. Not nearly the same love for people already in a country or who remain in a war torn country. Selective reading and implementation of the Gospel. Theatrics. Hypocrisy. Power. Yup. Nothing new under the sun. He'll do very well for the people he loves. And will become a beacon for his adoring public. Not so much for anyone else. I recall he was totally surprised by the appointment. Moved very quickly on this PR piece, you think?

The selective reading seems to be yours, Christopher. This article talks about the Church's ministry to migrants, refugees, and displaced persons and Archbishop Czerny's commitment to that. Read Catholic Social Teaching and Catholic Social Justice and familiarize yourself with the teaching in the gospels, because it seems your prejudice is showing. See the comment in this thread by Jorge Rebasa and open your heart. As the saying goes, "There but for the grace of God..." Finally, I would be far more concerned about a cardinal candidate who was NOT surprised by his appointment and instead expected it or felt deserving of it.

What beautiful symbolism! What a powerful sign of commitment! God bless the new cardinal, Pope Francis and their blessed, inspiring mission.

Wonderful article! Thank you for telling us about his refugee history. I too am a refugee, with my family having fled communism many years ago and starting from nothing in America. Your story is also very beautiful, Fr. Luke. May God guide you in your Jesuit vocation. Keep up the athletics. Mens sana in corpore sano.
http://www.jesuits.org/story-details?TN=PROJECT-20170530114732&MTN=3A93368D-3A96-4875-93DF-0F101FC13425&wvideo=dik1ade3un

A beautiful coat of arms on all levels. The red folded item with the tassels is not a galero, which cardinals no longer receive. It is the cardinal's cassock cincture, which has tassels on the bottom.

Hearty congratulations to all. God bless.