Pope to create 13 new cardinals in October, including three Jesuits 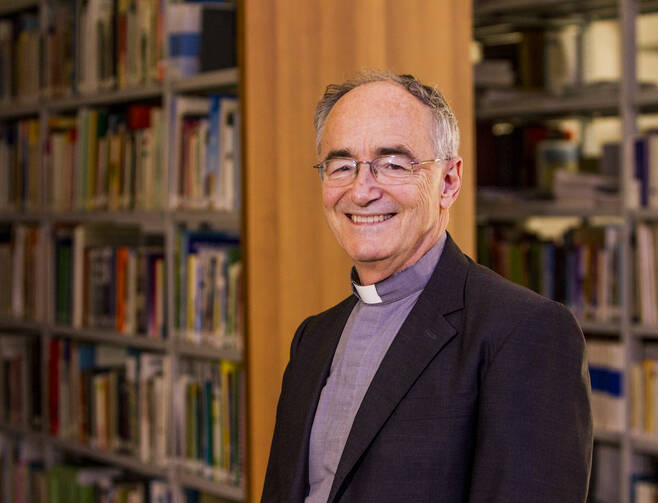 Jesuit Father Michael Czerny, undersecretary for migrants and refugees at the Vatican Dicastery for Promoting Integral Human Development, was one of 13 new cardinals named by Pope Francis Sept. 1. He is pictured in an April 10, 2017, file photo in Rome. (CNS photo/Robert Duncan)

Pope Francis announced he will create 13 new cardinals Oct. 5, choosing prelates from over ten different nations as a sign of “the missionary vocation of the church that continues to proclaim the merciful love of God to all men and women of the earth.” None of the new cardinals is from the United States.

The only Canadian (who could also be counted as a European) named was 73-year-old Jesuit Father Michael Czerny, undersecretary of the Section for Migrants and Refugees at the Dicastery for Promoting Integral Human Development. He was born in Czechoslovakia, grew up in Canada, where he joined the Jesuits and went on to study in the United States. He served at the Jesuit Curia as secretary for Social Justice and afterwards founded the African Jesuit AIDS network in Kenya while working there. Since 2010 he has worked in the Vatican in the field of Justice and Peace, and has been deeply involved assisting Pope Francis on the question of the environment.

Cardinal-designate Czerny, who Pope Francis had earlier named as a special secretary for the Synod of Bishops for the Amazon, was in Guararema, Brazil, when the announcement was made. He told America by phone that he had not known he was going to be made a cardinal. Another Jesuit, Jean-Claude Höllerich from Luxembourg, has also been named a cardinal. He taught and held other positions for 17 years at Sophia University, Tokyo, before being appointed by Benedict XVI as archbishop of Luxembourg.

Pope Francis made the surprise announcement after arriving late for the midday Angelus because he was “trapped” in the elevator for 25 minutes due to a power failure in the Vatican. He said firemen had worked hard and managed to free him.

It will be his sixth consistory, and it comes as a surprise in terms of its composition and of the timing. Ten of of the 13 new cardinals will be able to vote in the next conclave. Of this group, six are European (including Father Michael Czerny, born in Czechoslovakia but now a Canadian), two are Latin American, one is Asian and one is African. Three of the new electors work in the Vatican.

The College of Cardinals now has 228 members of whom 128 are electors with a right to vote in the next conclave. One hundred are over the age of 80 and so have lost that right.

Up to now, Francis has tended to reduce the number of Europeans among the electors, but this time he has chosen six Europeans.

The one Italian among them is Matteo Zuppi, archbishop of Bologna and the first priest ordained from the Sant’Egidio Community. He is known as a man of dialogue with a simple lifestyle (he rides a bicycle), who has played an important role in brokering peace in Mozambique and other countries and was previously auxiliary bishop of Rome.

Two of the new electors are Spanish: Archbishop Ayuso Guixot, M.C.C.J., a Comboni missionary who has worked in the Sudan and Egypt, who is an expert on Islam and head of the Vatican office for interreligious dialogue, and Archbishop Cristóbal Lòpez Romero, a Salesian who has worked for many years in Paraguay and Bolivia as well as Morocco and is now archbishop of Rabat.

Among the three new cardinals who are not electors (because they are over the age of 80) but to whom he will give the red hat, one name stands out, that of Archbishop Michael Fitzgerald, a White Father who served for many years as secretary and then president of the Pontifical Council for Inter-religious Dialogue, and was then the Vatican’s top expert on Islam. But, in an extraordinary move, in February 2006, Benedict XVI reassigned him as nuncio to Egypt at a time when many in Rome expected him to be given the red hat. He served in that role until 2012, when he retired and went to work in Jerusalem. He returned to England earlier this year to work in a parish in Liverpool.

The full list of new cardinals who will be able to elect the pope in the next conclave are:

Reporting from Catholic News Service was used in this article.

Correction, September 1, 2019: A prior headline of this article misidentified the number of Jesuits who had been named cardinals.

Hurrah for Jesuits in the conclave!

I do hope that these new cardinals are orthodox Catholics and not left-wing ideologues.