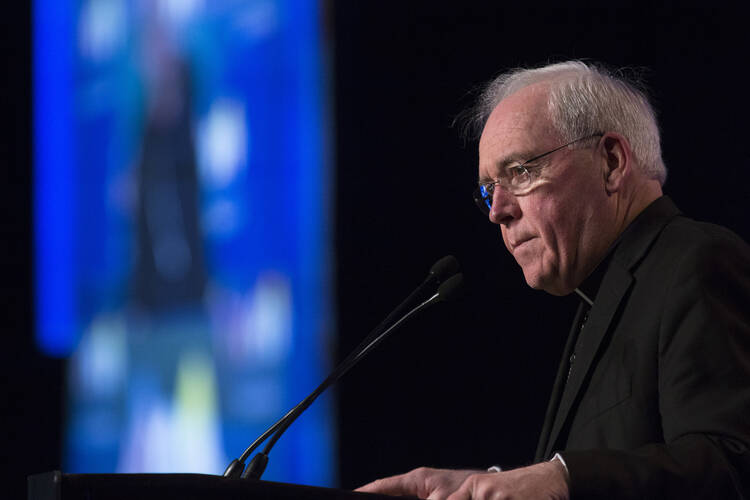 The Vatican announced on Oct. 3 that it has appointed the Most Rev. Nicholas DiMarzio of Brooklyn to lead an apostolic visitation for the troubled Diocese of Buffalo “in the near future.” The results of this fact-finding mission will be reported to the Holy See’s Congregation of Bishops. The Vatican communique described the visitation as a non-judicial and non-administrative process that will not be subject to a recent papal decree that updated procedures on bishop accountability.

In a statement responding to the Vatican announcement, Bishop Richard Malone said that he welcomes the apostolic visitation, which he said was for the good of the church in Buffalo, and said he would cooperate fully.

According to the statement, neither Bishop Malone nor his spokesperson will be making any further comments on this matter.

Bishop Richard Malone said that he welcomes the apostolic visitation, which he said was for the good of the church in Buffalo, and said he would cooperate fully.

Bishop DiMarzio also released a statement: “This is a difficult period in the life of the Church in Buffalo. I pledge I will keep an open mind throughout the process and do my best to learn the facts and gain a thorough understanding of the situation in order to fulfill the mandate of this Apostolic Visitation.”

He added, “Our Holy Father has a great devotion to Our Lady Untier of Knots—I beg the intercession of the Blessed Mother, that I may be an instrument for surfacing the truth so that justice might be served and God’s mercy experienced.”

The Diocese of Buffalo said in a statement: "Heartfelt gratitude is expressed to all those who are working so generously on this visitation—first, to our apostolic visitator, Bishop DiMarzio and his assistant, and to the Catholic community of Buffalo, including the lay faithful and the clergy."

"The mission of the church in Buffalo," it added, "continues to be to seek justice and compassion for the victim-survivors of sexual abuse and their families and to continue the good works of the church, fulfilled on a daily basis, by faithful men and women who serve a wide spectrum of our diocese."

Bishop Malone has faced numerous questions because of his handling of abuse allegations. Several seminarians and at least one diocesan priest called for his resignation following the leak of diocesan files by a diocesan secretary that allegedly show the bishop had kept priests accused of abuse in ministry. The latest criticism of Bishop Malone came in early September of this year over his handling of a situation involving two priests' relationship with a seminarian.

During a Sept. 4 news conference, Bishop Malone said the majority of priests and parishioners in the diocese supported him and he would not resign over his handling of a situation he described as "a very complex, convoluted matter."

He called the news conference to discuss a letter from Father Ryszard Biernat to a seminarian, Matthew Bojanowski, and allegations by Bojanowski that another priest, Father Jeffrey Nowak, harassed him. Father Biernat began a leave of absence from his position as the bishop's priest-secretary Aug. 14. He had been in his position since 2013.

Bishop Malone said Father Nowak had not been accused of engaging in sexual contact with an adult or child and that the diocese was unaware of any activity that endangered parishioners or the public. The bishop placed the priest on leave because he refused to seek a behavioral assessment.

"I'm here because I feel an obligation as the one who was sent here to lead this diocese, to carry on, and once again, if I thought the majority of Catholic people in particular were calling for my resignation, that would be a different story," Bishop Malone said at the news conference.