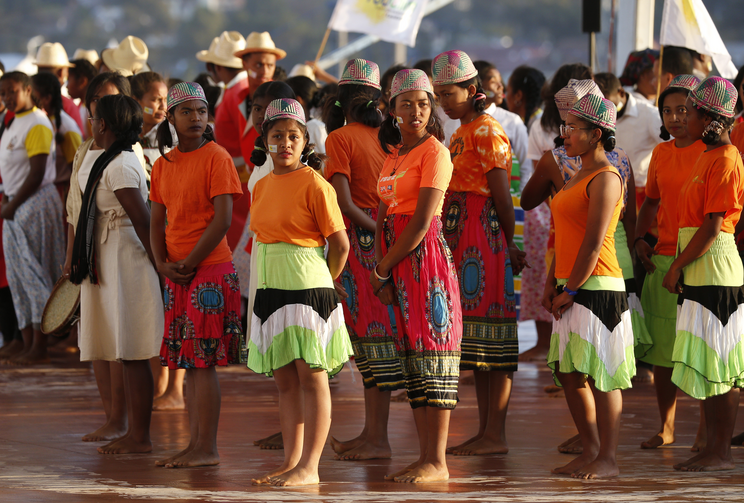 Dancers wait to perform for Pope Francis during a vigil with young people at the Soamandrakizay diocesan field in Antananarivo, Madagascar, Sept. 7, 2019. (CNS photo/Paul Haring)

ANTANANARIVO, Madagascar (CNS)—Following Jesus means growing in friendship with him and with one’s brothers and sisters, never being content with the way things are, but not just griping about them either, Pope Francis told young people.

Jesus calls his disciples “to be on the move, acting, committed, certain that the Lord is supporting and accompanying them,” he told the teens and young adults from across Madagascar.

“It is impossible to be a missionary disciple all by ourselves.”

Tens of thousands of people of all ages were gathered for the vigil on the wide-open diocesan field at Soamandrakizay Sept. 7; the older folks came because the pope was scheduled to celebrate Mass there the next morning.

With straw mats and plastic tarps, blankets or sleeping bags, jugs of water and bags of food, it seemed that everyone was planning to spend the night.

Trinitarian Sister Jeannine Raivomanana, a young sister who was with three others from her

order, said, “Since Pope Francis is coming here, we will stay.”

Mihaje Andrianera, 20, was there with her 18-year-old sister, Fara. “When I heard the pope was coming, I knew it was an opportunity. I mean, I just had to be here.”

Fara added, “This is the only time in our lives we will see him.”

The pope arrived as the winter sun was setting; the young people kept singing and dancing as Pope Francis toured the crowd in the popemobile.

"The Lord always reminds us how precious we are in his eyes, and he entrusts us with a mission.”

Speaking in Italian, with a priest translating into Malagasy, the pope told the young people he knew that, deep down, they all were searching for a happiness that no one could take from them.

Sometimes, he said, it will be tempting to give up hopes and dreams for a meaningful life and for a more just world, “especially when you lack the bare necessities to make it from day to day or to pursue your studies, or when you realize that without a job, stability and social injustice, your future is blocked.”

Jesus calls each person to move forward and to find ways to make a contribution to improving society, he said.

However, the pope said, “The Lord is not looking for lone adventurers. He gives us a mission, yes, but he does not send us out alone to the frontlines.”

“It is impossible to be a missionary disciple all by ourselves,” he said. “Certainly, we can accomplish great things on our own, but together we can dream of and undertake things undreamt of!”

Pope Francis also urged the young people to remember how much God loves them and how he calls them to love others, including those society scorns.

God “does not call us by our sins, our errors, our faults, our limits, but by our name; each of us is precious in his eyes,” he said.

“The devil also knows our names,” the pope said, but he tends to call people by a label based on their “sins and errors; in this way, he makes us feel that however much we do, nothing can ever change, everything will remain the same. The Lord will have none of that. The Lord always reminds us how precious we are in his eyes, and he entrusts us with a mission.”

Pope Francis asked the young people of Madagascar to respond to God's call like Mary did, by saying “yes” and setting off. “It is the ‘yes’ of all those willing to commit themselves and take risks, ready to stake everything, with no guarantee except the sure conviction of knowing they are bearers of a promise.”

May God bless the Holy Father, Pope Francis. You have inspired me to see being a humble and quiet servant of God and His Church as the greatest and biggest honor on earth and in heaven. Always inspiring. Always motivating-Pope Francis, my Pope, our Pope, the servant of all servants of Christ!

World-making and world-changing - an exciting call.

Several of us gathered after Sunday Mass today and agreed that Pope Francis is inspiring. We discussed how his example has encouraged and motivated us to do likewise in our community. God sent us a holy man to lead the Church.
Viva el Papa

More Hypocrisy from our Pope Francis.

Sexism and sexual discrimination are the leading causes of poverty worldwide and no one knows this fact better than the Roman Catholic Hierarchy because it is one of the largest and most powerful charities in the world.

Yet, no entity is more sexist and teaches misogyny and sexual discrimination to the secular or religious world more potently than the Roman Catholic Church. This makes us, the Roman Catholic Church, one of the larges producers of poverty around the world, and after creating and supporting that poverty, we in turn beg constantly for global funds to help alleviate it.

This leads us back to our Pope's own words "Change the world, don’t just gripe about it!"

Pope Francis, I and many others have been begging you to change the rules treating men and women differently under the laws of our Church constantly, so that men and women are treated the same and with same human dignity, and that mandates all same sacraments and opportunities. All we hear back form you is that changing rules, even when they have no foundation in scripture, and no fully proven foundation in early church history, can still ever be changed! Stop griping and lying about what you can't do "ordain women priests and bishops immediately" when in fact, as Pope, everyone knows you can change this law and literally ordain women priests and bishops today or tomorrow, if you wished. You need to face the fact that you are the problem and stop blaming other things first since those other entities are largely following your example of vicious, abusive, and uncaring sexism, and they too are describing their misogyny as Christian despite how reprehensible such a suggestion may be in truth.