Pope Francis tells Madagascars bishops: Be sowers of faith, hope and peace in this land of contradictions

Pope Francis tells Madagascars bishops: Be sowers of faith, hope and peace in this land of contradictions 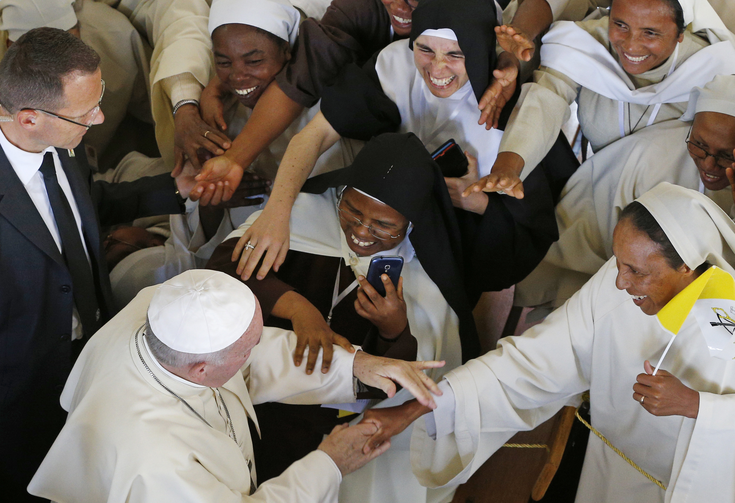 Pope Francis encouraged the bishops of Madagascar “to be sowers of hope and peace” in the midst of the contradictions that are so evident in this land which, though rich, has “widespread poverty.” Like the sower in Gospel, he said, “we bishops are called to spread seeds of faith and hope on this earth.”

On Sept. 7, the pope came to the cathedral of Andohalo that is built on a hill overlooking Antananarivo, the capital city and home to more than 3 million inhabitants. The church was built in a Gothic style at the end of the 1870s and resembles the cathedral of Notre Dame in Paris.

Crowds lined the streets of the city as the pope was driven from the nunciature where he is staying to the cathedral. The Malagasy people consider him a holy man and friend of the poor, and they are anxious to catch a glimpse of him, cheer him on and receive his blessing.

He admitted that “the task of a shepherd in such circumstances is not easy” but said “we are called to be sowers of hope and peace.”

Francis knows that the church in this land, where half of the population is Christian (35 percent Catholic), is truly “a church of the poor and for the poor.” He knows too that members of many religious congregations are working here including Jesuits, Dominicans, Salesians, De La Salle, Lazarists, Spiritans and Marists and that the 7.6 million faithful in this land are served by 25 bishops, 659 priests (362 of them from religious orders), 1,200 women-religious and 56,871 catechists.

Sitting at a table in front of the high altar, Francis told the bishops he is aware that they are carrying out their mission “amid contradictions: a rich land with widespread poverty; an ancestral culture and wisdom that respect the life and dignity of the human person but also the presence of inequality and corruption.”

He admitted that “the task of a shepherd in such circumstances is not easy” but said “we are called to be sowers of hope and peace.” He explained, “We are sowers, and those who sow do so in hope; they do it counting on their own efforts and personal commitment, but also knowing that many other factors combine to make the seed take root, grow and finally give abundant grain.”

He said, “the sower may be weary and concerned, but he does not give up and stop sowing, much less burn his field when things do not turn out well … He knows how to wait; he trusts; he realizes the limitations of his sowing. But he never stops loving the field entrusted to his care. Even if he is tempted, he does not abandon it or leave it to another.”

Pope Francis told the bishops that “like the sower, we are called to spread seeds of faith and hope on this earth.” But, to do so, “we need to develop that ‘sense of smell’ that can enable us to recognize more clearly whatever compromises, hinders or damages the sowing.”

For this reason, he said, “the church’s pastors, taking into account the contributions of the different sciences, have the right to offer opinions on all that affects people’s lives since the task of evangelization implies and demands the integral promotion of each human being.”

“We need to develop that ‘sense of smell’ that can enable us to recognize more clearly whatever compromises, hinders or damages the sowing.”

Indeed, the pope said, “it is no longer possible to claim that religion should be restricted to the private sphere and that it exists only to prepare souls for heaven. We know that God wants his children to be happy in this world too, even though they are called to fulfilment in eternity.”

“Christian conversion demands reviewing especially those areas and aspects of life ‘related to the social order and the pursuit of the common good,’” he said. Consequently, he told them—also in a message that appeared to allude to past tensions between church and state—“no one can demand that religion should be relegated to the inner sanctum of personal life, without influence on societal and national life, without concern for the soundness of civil institutions, without a right to offer an opinion on events affecting society.”

In fact on this island today, relations between church and state are good, especially after the island’s new constitution confirmed the lay nature and neutrality of the state in relation to all religions. Moreover, Madagascar and the Holy See established diplomatic relations 52 years ago, and that relation is flourishing, as witnessed by the visit of John Paul II in 1989 and Francis today.

Pope Francis said he knew the bishops were deeply conscious of their “responsibility to protect the dignity of your brothers and sisters who strive to build a nation of greater solidarity and prosperity, endowed with solid and stable institutions.” He commended them for this, saying, “Can a pastor with the heart of Jesus be indifferent to lives entrusted to his care?”

“The church’s pastors, taking into account the contributions of the different sciences, have the right to offer opinions on all that affects people’s lives since the task of evangelization implies and demands the integral promotion of each human being.”

He told them that “the prophetic dimension of the church’s mission calls, always and everywhere, for a discernment that, in general, is not easy.” In this regard, and perhaps drawing on his own experience in Buenos Aires, he remarked that, “a prudent and independent cooperation between the church and the state remains a constant challenge, for there is always a danger of collusion, especially if we end up losing the ‘zest of the Gospel.’” But, he said, “by attentive listening to what the Spirit continues to say to the churches, we can escape pitfalls and release the ferment of the Gospel for the sake of a fruitful cooperation with civil society in the pursuit of the common good.”

Francis explained that “the mark of such discernment will be that the proclamation of the Gospel demonstrates concern for all forms of poverty,” and this includes the people’s temporal welfare. It means “education, access to healthcare...above all employment” and a just wage. He told the bishops that “to be pastors according to God’s heart...we have a particular duty to protect and remain close to the poor, the marginalized and the little ones, to children and those most vulnerable, to the victims of exploitation and abuse.”

Pope Francis told the bishops that he and they have to sow the seeds “with Christian patience” in the knowledge that “we are neither in control of, or responsible for, the entire process.”

They must “not try to control every detail” but “leave plenty of room for new initiatives, let things mature in their own good time, and not fit everything into one mold,” he said. Moreover, as sowers they must “not demand more than what is reasonable or disregard apparently meager results.”

The pope encouraged them as pastors to take care especially of their priests and be for them “an elder brother and a father.” They should also give special care to the accompaniment and discernment of vocations to consecrated life and the priesthood, and they should emphasize that “the fundamental call, without which the others have no reason to exist...the call to holiness.” They should also extend this attention to the lay faithful, and he encouraged them to provide training for lay women and men “and not to leave them alone in their mission to be the salt of the earth and the light of the world.” In this way, he said, “they will be able to contribute to the transformation of society and the life of the church in Madagascar.”

He encouraged them “to open our hearts and minds and to banish the fear that tempts us to withdraw into ourselves and to cut ourselves off from others.” Pope Francis also encouraged them to foster “fraternal dialogue” among themselves and to “share” gifts and cooperation between the churches of the Indian Ocean since they face similar pastoral challenges, including the protection of the environment and the problem of immigration.

As Pope Francis imparted his blessing, he asked them to convey his personal greetings to all those priests and men and women religious who are elderly or ill and to care especially for them. He ended by asking them, “please do not forget to pray for me, and ask others to do the same!”

Pope Francis, my Pope, our Pope, the servant of all servants of Christ. You taught me the way of humility before God, His Church and His people. Thank you. God Bless you.