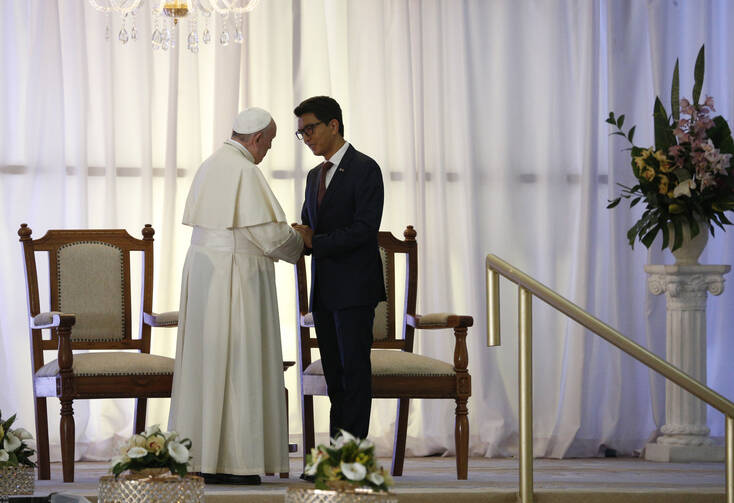 On his first day in Madagascar, Pope Francis issued a strong call to the governmental authorities of this island of 27 million people to fight “with determination” against “endemic forms of corruption and speculation,” to “confront” the situations that “create conditions of inhumane poverty,” and to protect the environment against damage to nature and the people.

Madagascar’s President Andry Rajoelina, 45, who has been in office since January of this year and who (also as president for a short time) met Pope Francis in 2013, welcomed him to the Ivaoloha Presidential Palace, which was built in 1975 with funds from North Korea. After a private 15 minute conversation, the president led Francis into the ceremonial building to address Madagascar’s civil authorities, the diplomatic corps and the religious leaders. Fifty percent of the population follow traditional religion, 35 percent are Catholic, many others are from the different Christians denominations (Lutheran, Anglican, Protestant) and 7 percent are Muslim.

After an enchanting interlude of song provided by a youth choir, the president in his welcome address thanked the pope “for honoring our country by coming to bless the nation” and said “Tongasoa!” (“Welcome” in Malagasc). He told Francis: “Your presence is a sign of friendship and it is the fruit of a promise kept, namely that Madagascar is not a forgotten nation.” He continued, “your visit is a source of immense joy for the Malagasc people. Holy Father you are here on a friendly land. You are at home. My home is your home.”

The president recalled that when the country regained its independence in 1960 there were high hopes for development but these have not been realized. Since then, the country has gone through “many storms and big, terrible dangers.” But, he said, “the Malagasc people are courageous” and this year “a new page is opening” and Pope Francis’ presence “consecrates” this new direction and “brings hope to the nation.” He asked the Holy Father to bless and pray for Madagascar.

Pope Francis responding in Italian, with simultaneous translation in French and Malagasc—the official languages of the country—thanked the president for inviting him and greeted the various authorities present. He then addressed the fundamental problems that are creating extreme poverty for the vast majority of the inhabitants of “the red island”—as Madagascar is called because of the color of the soil—and threatening the environment and social life.

He recalled since 1960, the nation has aspired to stability and peace, through a fruitful democratic alternation. Then, alluding to the political upheavals that have happened since then, Francis underlined the fundamental importance of “politics” in building the nation “when it is practiced as a means of serving society as a whole” and when those with political responsibility “serve and protect the citizens and care especially for the most vulnerable.” He drew applause when he noted that the preamble to the country’s constitution speaks of one of the fundamental values of Madagascan culture: “fihavanana,” “a word that evokes the spirit of sharing, mutual help and solidarity,” and “the importance of family, friendship and goodwill among people and with nature.”

In this regard, Francis said, “I would encourage you to fight with strength and determination against all endemic forms of corruption and speculation that increase social disparity, and to confront the situations of great instability and exclusion that always create conditions of inhumane poverty”—a reference to the fact that according to the United Nations, some 90 percent of the people are living below the poverty level. Moreover about one million children (minors) are exploited workers, while prostitution of minors, fostered by sexual tourism, is a terrible wound in this nation.

He emphasized “the need to establish the various structural mediations that can assure a better division of income and an integral development of all, particularly those most poor.” He insisted that “development cannot be limited to organized structures of social assistance, but also demands the recognition of subjects of law called to share fully in building their future.”

Pope Francis went on to underline the need for a development that includes “showing consideration and care for our common home.” He said this “calls not only for finding ways to preserve natural resources,” but also for seeking “comprehensive solutions which consider the interactions within natural systems themselves and with social systems.” He told them, “we are faced not with two separate crises, one environmental and the other social, but rather with one complex crisis which is both social and environmental.”

Pope Francis: “I would encourage you to fight with strength and determination against all endemic forms of corruption and speculation that increase social disparity, and to confront the situations of great instability and exclusion that always create conditions of inhumane poverty.”

He reminded them that their “lovely island,” the fourth largest in the world, “is rich in plant and animal biodiversity, yet this treasure is especially threatened by excessive deforestation, from which some profit” and “the deterioration of that biodiversity compromises the future of the country and of the earth, our common home.” This was a reference to the fact that this island in the Indian Ocean (together with smaller nearby islands) is a “biodiversity hotspot,” with diverse ecosystems and unique wildlife, 90 percent of which is found nowhere else on earth.

He drew attention to the fact that “the last forests are menanced by forest fires, poaching, the unrestricted cutting down of valuable woodlands. Plant and animal biodiversity are endangered by contraband and illegal exportation.”

Speaking to journalists about deforestation while waiting for the pope to arrive, the British Ambassador Philip Boyle, said “about 200,000 hectares a year are lost in Madagascar and, by some projections, most of the damp, moist forest will be lost by 2040, so unless there are measures to prevent mass deforestation and mass reforestation then possibly the most unique habitat on earth will be lost.”

Well aware that poor people cut trees to provide fire for cooking for their families, Pope Francis said, “it is also true that, for the peoples concerned, a number of activities harmful to the environment at present ensure their survival. So, it is important to create jobs and activities that generate income, while protecting the environment and helping people to emerge from poverty.” He declared that “there can be no true ecological approach or effective efforts to safeguard the environment without the attainment of a social justice capable of respecting the right to the common destination of earth’s goods, not only of present generations, but also of those yet to come.”

In this regard, Francis said, “it is incumbent on all to be involved, including the international community, many of whose members are present here today.” He acknowledged that international organizations provide much aid “for the development of the country” but he said Madagascar’s openness to this means it risks being subjected to “a presumptive ‘universal culture’ that scorns, submerges and suppresses the cultural patrimony of individual peoples.”

Pope Francis insisted that “economic globalization… should not lead to cultural uniformity,” rather there is a need that the provision of foreign aid should be done in a way that is “respectful of local values and ways of life and of the expectations of citizens,” so that the latter “may progressively take charge and become the artisan of their own future.”

He assured the president of “the readiness of the Catholic Church in Madagascar, in ongoing dialogue with Christians of other confessions, the followers of the various religions and all the elements of civil society, to contribute to the dawn of a true fraternity that will always value ‘fihavanana’—the spirit of sharing, mutual help and solidarity” and said, “in this way an integral human development can be fostered, so that no one will be excluded.”

He concluded by answering the president’s request to bless the country and said: “I ask God to bless Madagascar and those who live here, to keep your lovely island peaceful and welcoming, and to make it prosperous and happy!”

How does one eliminate poverty? Nearly the whole world was in extreme poverty just over 200 years ago. Only 7% of the world now live in extreme poverty. What does the pope think has changed. Platitudes won’t do it. Maybe acknowledging what caused this change would be a good first step.

May I remind Papa that when you buy an insurance policy you speculate. Paying a third party to assume the risk of adverse consequences.
If the Malagasc's want to prevent complete deforestation here's a simple solution. Give each citizen a share certificate in the forestry enterprise and bring in Weyerhauser, Georgia Pacific or the Cargill Organization to manage it, and have a significant ownership interest. Avoid the oligarchical issues of Russia by allowing free trading (speculation) of the share interests with full disclosure.