We asked our readers if El Paso and Dayton were mentioned at Mass on Sunday. Here’s what they said.

We asked our readers if El Paso and Dayton were mentioned at Mass on Sunday. Here’s what they said. 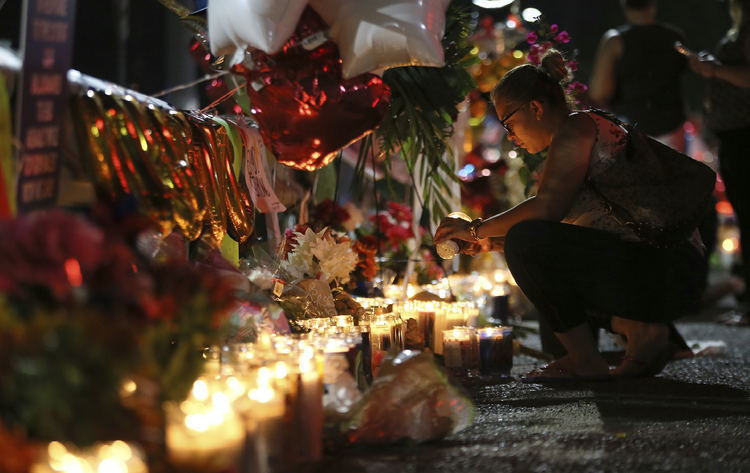 Roxana Jaquez lights a candle at an ever growing memorial Monday, Aug. 5, 2019, outside the Walmart in El Paso, Texas, where a mass shooting took place on Saturday. (Mark Lambie/The El Paso Times via AP)

Should a parish address current events at Mass? How? What if “current events” are national tragedies? Priests and parish employees around the country grappled with these questions after back-to-back mass shootings over the weekend left at least 31 dead and dozens injured in El Paso, Tex. and Dayton, Ohio.

America asked readers of its daily newsletter if the shootings were addressed at the Mass they attended and what they thought about how the news was handled (or not). Below are some of their responses. 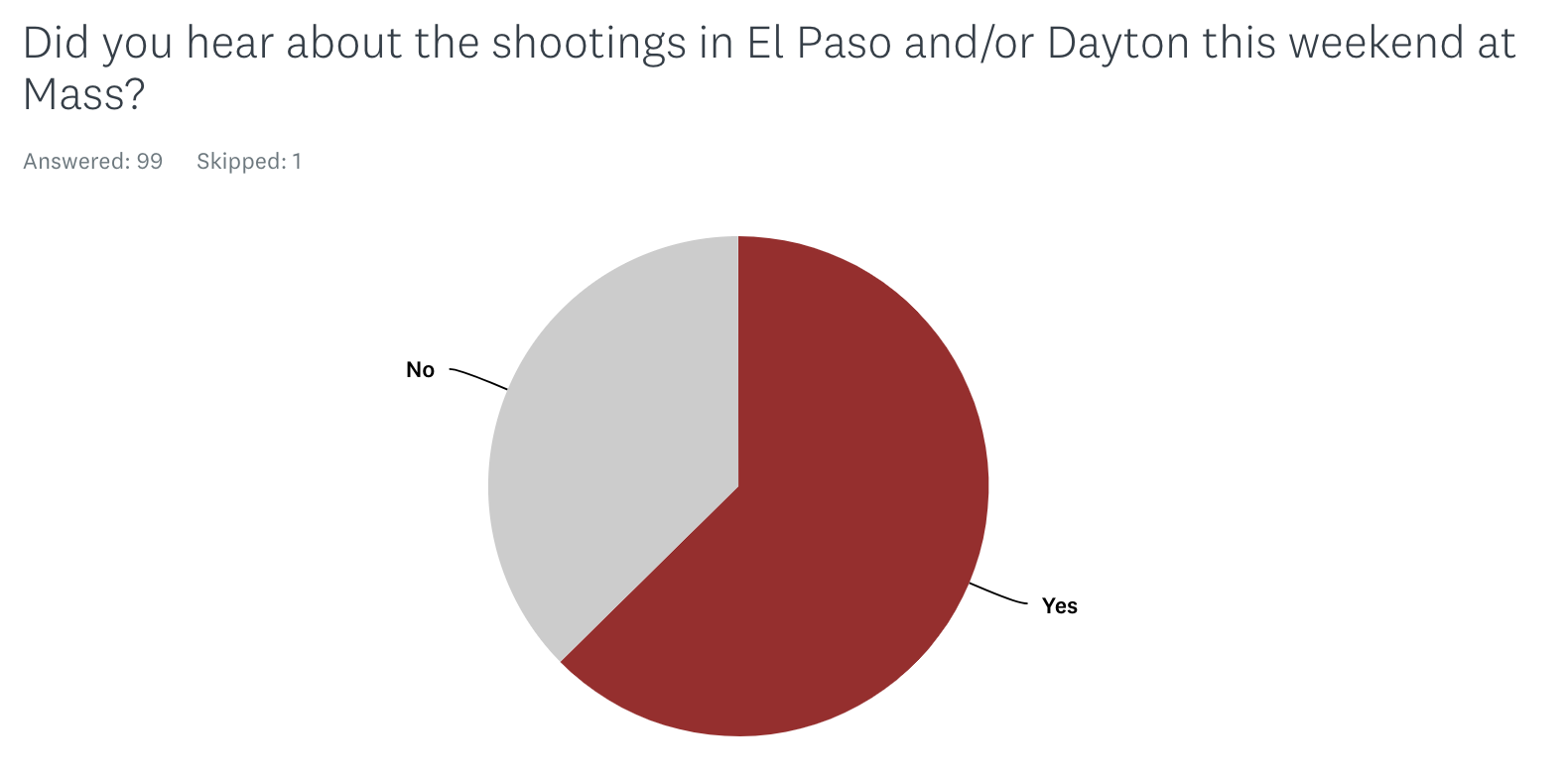 If yes, what did you think about how the shootings were addressed?

They were addressed simply, but I was glad to hear mention of them. It would have been terrible to go through the liturgy not acknowledging what happened.
Ashley Ponce
Cleveland, Ohio

Very general prayers were asked for. I wish more would have been said—especially during the homily.
Mary Sanders
Frisco, Tex.

Our pastor addressed the shootings in a heartfelt statement—a homily before his planned homily.
Mary Ott
Silver Spring, Md.

Appropriate at Mass. As we live in the Chicago area, the contrast with the shootings [here] every weekend was inevitable and striking.
Michael Myers
Hoffman Estates, Ill.

We were on vacation in Narragansett, and I hadn’t been following the news, so the homily was the first I had heard of the Dayton shooting. I thought it was appropriate to pray for all those affected.
Lisa Shay
Clinton Corners, N.Y.

I thought at first that [our priest] made a mistake when he said Gilroy, El Paso and Dayton, Ohio. I hadn’t even heard about the Ohio shooting yet.
Jane Maiello
Camarillo, Calif.

I thought at first that [our priest] made a mistake when he said Gilroy, El Paso and Dayton, Ohio. I hadn’t even heard about the Ohio shooting yet.

If no, would you have liked to have seen it addressed? If so, how?

Yes, but in my church, current events and real life are never discussed. They only parrot whatever the Gospel that was read that day.
Celeste Champagne
Norwalk, Conn.

No. We hear enough of this already. It’s too politicized.
Michael Reilly
Eastport, Me.

Yes. It should have been addressed in the homily and in the Prayers of the Faithful. Even at the end of Mass, when the celebrant announced an upcoming blood drive (already scheduled), he failed to tie it to the critical need for blood for those injured in the shootings.
Catherine Dursum
Houston, Tex.

I was extremely disappointed that we did not pray for the victims and their families. Have we gotten so jaded that we no longer mention these shootings?
Mary Ellen Firestone
East Brunswick, N.J.

[I would have liked to have seen it addressed] as a challenge to the diverse spectrum of congregants to pray and work for reasonable dialogue and legislative solutions. The American culture and soul are at stake. We risk our lives so civilians have the right to carry automatic weapons. Why? This is really a right-to-life issue.

My parish consistently avoids engaging in any commentary that might offend the conservative parishioners. It’s sad really.

the tragedy was ''''mentioned''' by the celebrant before going off on an 'sermon of ''inconsequentials'......'' i was disappointed...very disappointed. ''the church in the modern world'' ...it was not.

This is so sad. Especially when people say it's best not to discuss this in church because it's "so politicized." We are reaping the harvest of the John Paul II priests and bishops who lack a sense of the prophetic, of speaking out. It looks like we are going backward, not forward.

Most places I think it was just the Prayers of the Faithful. I agree with Mark and this is why people do not come. The faith can no longer seem to address real life and issues.

Our celebrants always refer to current events, especially since our parishioners represent more than forty nations. It was especially painful as we are in Baltimore, and our city and people had been trashed the week before by a certain national official.

I was shocked that there were no comments or prayers for the victims. I strongly support the separation of church and state but praying for the victims is just common decency. I wish the Church would take a stronger stand on sensible gun laws.

Our parish tends to be quite liberal and socially active. They were mentioned,though not at length, and then brought up during prayers of the faithful. From what I could hear after Mass there was quite a bit of talk about it between people.

There was not a word or prayer at our 8:30am Sunday Mass. I wondered if they had even heard the news. The priest did joke about his new haircut though, at the end of Mass.

Catholics supported Misogyny, Racism and Anti-immigrant policies when they supported (80%) this President and his Administration
And Chief Justice nomination. America Magazine is still part of this rising of White Supremacy. We are heavily supporting all Hate through the Napa Institute, knights of Columbus and Religious Freedom institutes. Our liturgies and other gatherings of the faithful will remain totally irrelevant until we figure out together who Christ is in our world today. This lack of noticing reality is not surprising at all this me or the 2nd largest denomination in the United States—former Roman Catholics. ❤️This is Charitable❤️💚💜💛🧡🌈💙💔

Just saw this article so couldn't respond earlier. I am an organist at two different parishes. In my home parish, where the pastor is of Mexican heritage, he talked about the shootings in El Paso, Dayton and California (the Garlic festival shooting) before even starting Mass, from the presider's chair. Also talked about it in the homily. At eh other parish, we had a visiting missionary from Kenya. Not a single mention