The spire of Notre Dame has fallen, but our faith endures

The spire of Notre Dame has fallen, but our faith endures 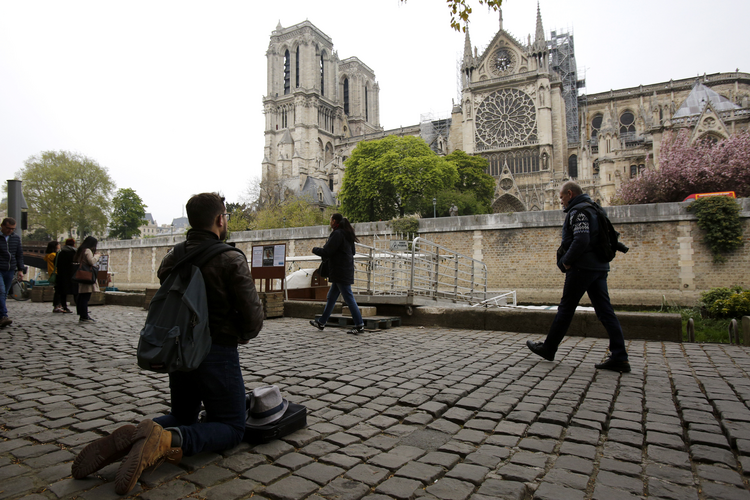 A man kneeled as people came to watch and photograph the Notre Dame cathedral after the fire in Paris, Tuesday, April 16, 2019. (AP Photo/Christophe Ena)

I am in Milan for Holy Week. I have done this a couple of times before, privileged to experience our faith in this ancient center of Christian life and thought.

Yesterday, I walked down toward Milan’s Piazza del Duomo, the plaza in front of the cathedral, the center of town, the heart of the city. As the façade of the cathedral came into view, its dozens of statues gleamed in the afternoon sun. (They had undergone thorough cleaning in recent years.) This façade, though not so ancient as the structure behind it, speaks of faith, of art, of celebration, of what has been and is and is yet to be. These are the saints who have gone before us and who call us to follow them as they lived the Gospels in their days.

At the same time as I admired Milan’s cathedral, I did not know that a couple of 100 miles to the northwest, the cathedral of Notre Dame de Paris was in flames. When later my younger brother and sister both alerted me to this catastrophe, I watched some video footage on the small screen of my computer. Flames roared into the sky, and the ancient spire in the center of the roof caught fire and soon collapsed. The people in the videos watched in horror, as now did I.

The cathedral in Paris is a magnet, drawing faithful Catholics through its portals to get in touch with their roots.

As in many of Europe’s cities, the cathedral in Paris is a magnet, drawing faithful Catholics through its portals to get in touch with their roots. But it also attracts tourists, individuals of other faiths or of no faith, curious about its art and its history, its splendor and its mystery. It is easy to believe that very few of these tourists leave untouched by the faith that imagined and built and kept this place alive through centuries.

Twenty years ago, “Notre Dame de Paris,” a musical based on Victor Hugo’s writing, opened in Paris. It soon after toured Europe, including a London production in English. In one of the musical numbers, the singer declares that “it has arrived, the age of the cathedrals, as the world has entered a new time.” He says that he and his colleagues are the nameless artists “in rock and in rhymes” who made that age what it was. They cut the wood and chiseled the stone and shaped and fired the bricks. They raised up pillars branching into pointed arches that lifted the lofty roofs. They “wanted to climb up toward the stars, to write their story in glass and in stone.” (Josh Groban has a beautiful rendering of this song in French on his album “Stages.”)

Life will endure. And so will the faith, which does not need our buildings, as much as they enhance it.

This was not some mere house they were making; it was art, story, life. They spent their lives celebrating their faith, the faith of their families, their cities. Thus they shared that faith with future generations. In Paris, this has been going on for 850 years. And now a sudden fire has wiped away much of what they lived and toiled for.

Are these stones I see in Milan permanent? Every possible care is taken to make them so. Entering the cathedral now means standing in a long line and passing through tough security, a sad necessity of our times. The line is shorter just to enter the left side, which is specifically set aside for praying. But still the visitors come, the faithful and the curious, who experience something here that makes the lines worth the wait. They admire and they pray, and when they leave they bring with them the memories and the feelings they experienced here.

Today’s headline in Milan’s Corriere della Sera proclaimed “In Lacrime per Notre Dame” (“In Tears for Notre Dame”), which appeared under a dramatic photo of the cathedral ablaze. An inside page ran a spread of the faces of Parisians as they watched in horror as their cathedral, the heart of their city, burned away.

The fire tears at all of our hearts and makes us wonder: Will Paris rebuild? One would suppose so. Life will endure. And so will the faith, which does not need our buildings, as much as they enhance it. We will continue to write our stories, in glass and in stone, perhaps, but also in how we live our lives with others and for others. This cannot burn away.

The tragedy of Notre Dame exists in our hearts, which are mostly empty. The glory of a Cathedral or of any church is exemplified by the people who built it to glorify God and those who use it to worship God. Three temples were built for the chosen people by Moses, Solomon and the Persian King Darius, but following the destruction by the Romans in AD 70 it has never been rebuilt. Therein lies a message, which should not go unnoticed. Europe was once the splendor of Christianity, but the churches are now almost empty. Will the flames of Notre Dame be remembered in ashes, or will the light of the fire reignite a burning love for our Creator? time will tell.

Cathedrals are architectural splendors and facades of faith. At worst mostly empty in Europe and at best packed in America with tourists as part of a must see and monarchical bishops manifest of extravagance and legacy. The fourth century changed a humble church into a playground of kings where they even declared a saint Charlemagne who beheaded anyone who refused to be baptized. The Fathers of the church? Please! Even to the discovery of the New World where perceptive Indians refused to be baptized at death by so called Christian invaders who learned from Charles Martel. Now we are led by the Billionaires at EWTN whose mantra is Trump led by thrice married Catholics, Bannon, Gingrich, Giuliani and Bishops who either abuse children or cover for those who do. Children are separated from mothers at the border while laws are broken and the loudest cry from our bishops is ant-abortion and anti-gay. At least today the bishops know that contraceptives are ethical, But they still condemn millions of children into poverty by banning contraceptives and family planning in Third World countries.
The lack of power of the bishops to confront the cruelty of Trump, a modern day Herod or Pilate if not Hitler, is a sin that cries to the heavens.
Francis of Assisi was wont to say that we need to preach without words. So we need the visual this week not of parading vestments in outlandish pageantry. But visuals of bishops getting arrested with the "captives" and getting out of their cavernous palaces.

Perhaps all the ceremonies should be conducted at trees and cemeteries where Jesus Crucified is clear rather than in facades of Babel.

Don't spend hundreds of millions of euros to reconstruct Notre Dame. Instead, turn the damaged cathedral into a historic site that presents the unvarnished truth about medieval Christianity, including antisemitism.