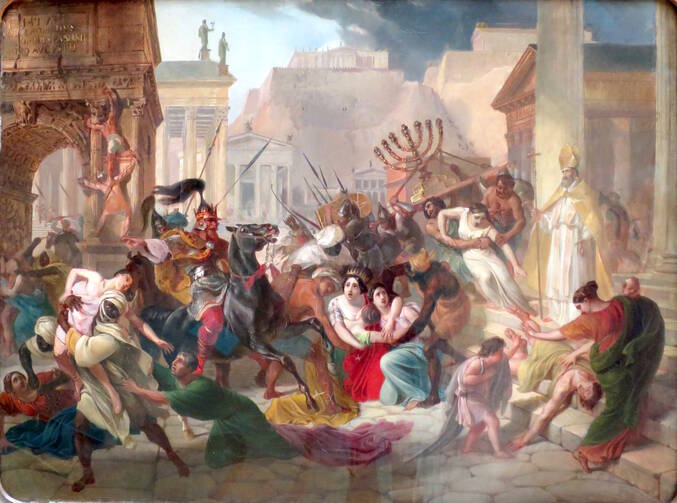 “The Sacking of Rome” (Karl Bryullov/public domain via Wikimedia)

Like millions of people around the world on Monday, my chest tightened as I watched Notre Dame Cathedral in Paris as its roof was consumed by flames. I have never had the opportunity to take a pilgrimage there, but I had dreamed that, one day, I would get a chance to visit one of the most beautiful places in the world. It seems that the destruction has been limited, so my dream might still become a reality.

Watching the news, I thought of the burning of the city of Rome by Alaric, king of the Goths, in 410 A.D. This, too, was deeply traumatic for Christians at the time. What could it mean, they wondered, that Rome burned just one generation after Christianity became the official religion of the Empire in 380 during the reign of Theodosius I? Wasn’t God supposed to defend and protect the Empire now that the pagans had been defeated? Why would God allow such a violation?

Wasn’t God supposed to defend and protect the Empire now that the pagans had been defeated? Why would God allow such a violation?

Christians at the time did not react to this event in a singular way. Melania the Younger, a rich Christian aristocrat who had left Italy just ahead of the invading horde, expressed nothing more than relief at having divested her enormous fortune in a turn toward the ascetic life prior to the pillaging. According to the biography written just a few years later by Gerontius, she said, “Lucky are the ones who anticipated what was to come and sold their possessions before the arrival of the barbarians.”

The Christian historian Orosius of Braga wanted to understand God’s role in the destruction, just as many Christians today are trying to understand why God would allow Notre Dame to be damaged. But he was not disturbed by the Roman violence one bit. In his Seven Books of History Against the Pagans, he interpreted the sack of the city in two ways. First, he wrote that “the enemy was allowed [by God] to do this in order to punish the arrogant, debauched, blasphemy of the town.” At the same time, he wrote, Rome was saved from total annihilation because “it is through his [God’s] clemency that we are alive.” In other words, God allowed Rome to burn because of its urban immorality but ultimately saved it because it has an important role to play in God’s plans.

The destruction of an earthly city—even the Eternal City—is ultimately meaningless.

Jerome, whose Latin translation of the Bible known as the Vulgate became the standard translation for the Catholic Church for over 1,000 years, wrote that he was so devastated by the destruction of Rome that he forgot his own name. “I was so stunned and dismayed,” he said, safely ensconced far away in Palestine, “that I could think of nothing else, day or night, but the well-being of all our people.... After the most brilliant light of all the world was extinguished...the entire world perished in one city.”

The spire of Notre Dame has fallen, but our faith endures
Edward W. Schmidt, S.J.

It was Augustine of Hippo, arguably the leading Christian thinker in the history of the tradition, who offered the most robust theological interpretation of this event. He was not concerned about the latest carnage to a city that had burned many times throughout its history. In a sermon he preached in Carthage to a crowd who were as distraught as Jerome, he said that such anxiety displayed a flawed understanding of the Christian vision. Christians, he said, must understand that the destruction of an earthly city—even the Eternal City—is ultimately meaningless. Instead, the heavenly city is the Christian’s true home. “The apostle Peter is reigning with the Lord. The body of the apostle Peter is lying in some place or other. His memorial is meant to stir you to love eternal things, not so that you may stick to the earth but so that with the apostle you may think about heaven.”

As I watched the spire collapse into the nave of Notre Dame, Augustine’s words echoed in my mind, words that I believe can help temper our grief. Though the destruction of this treasure undoubtedly is desolating, it is important to recall where the spire pointed—upward beyond itself to our true heavenly treasure. 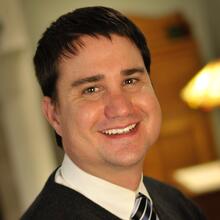 Stuart Squires is an associate professor of theology at Brescia University, in Owensboro, Ky. He has a book forthcoming from Wipf and Stock titled The Pelagian Controversy: An Introduction to the Enemies of Grace and the Conspiracy of Lost Souls.