The Catholic nun stories that haven’t gone viral (yet)

The Catholic nun stories that haven’t gone viral (yet) 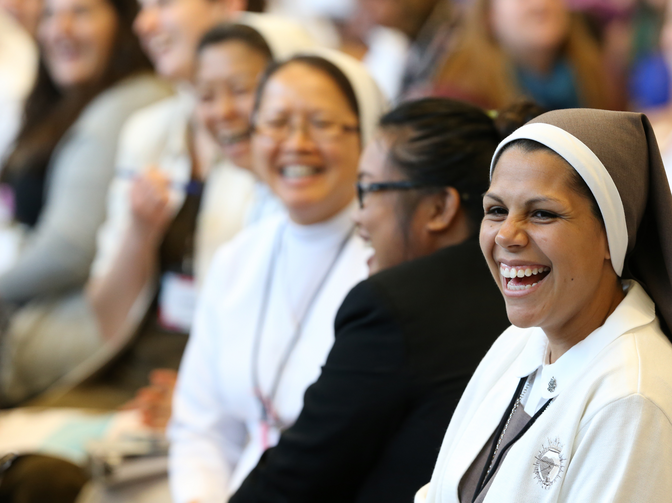 Women religious listen to a speaker June 8 during "Given," a leadership forum for young Catholic women at The Catholic University of America in Washington. (CNS photo/Bob Roller)

Catholics love a good nun story. A chainsaw-wielding sister cleans up after Hurricane Irma? Social media gold. Nuns playing soccer? Yes please. And who can forget Sister Jean? Not Zac. But every day and on every continent women religious are doing life-saving, cutting-edge work in hospitals, research laboratories, refugee camps and prisons. And those are the stories Dawn Araujo-Hawkins tells as a writer for National Catholic Reporter’s Global Sisters Report.

We ask Dawn what she wished more people knew about the work of women religious, especially black sisters, and about her own experience working as black woman in the mostly white Catholic media world.

In Signs of the Times, we bring you the top takeaways from the Vatican’s historic summit on child sexual abuse and discuss the case of Cardinal George Pell, the highest-level church official ever to be convicted of abusing a minor. Next, Pope Francis plans to write an apostolic exhortation on last year’s youth synod. What is an apostolic exhortation and why should we care? And finally, a new poll shows growing support for pro-life positions.

You can let us know what you think about our conversation with Dawn or any of our stories in our Facebook group. And thanks as always to our supporters on Patreon!

Signs of the Times

Vatican sex abuse summit: what you need to know
Cardinal Pell, most senior Catholic charged with child sex abuse, convicted, Vatican
Cardinal Pell news is ‘painful’ and he has right to defend himself to the end
Pope to issue post-synod document on young people in March
New poll: Big majorities of Democrats and young people reject late-term abortion

Numbers should be put to this. Is it 5, 500, several thousand? Is this recent? or several years in the past? All sounds horrendous but please quantify it.

I have known a lot of ex nuns and none (no pun) ever said anything about this. And some were no longer practicing Catholics.

"But every day and on every continent women religious are doing life-saving, cutting-edge work in hospitals, research laboratories, refugee camps and prisons."

A good nun story? Not really. You see, every day and on every continent secular and non- religious people are also doing life-saving, cutting-edge work, but with no strings attached and without virtue-signalling. It's the unsung wielding of the chainsaw that's important, not the religious affiliation of the individual doing it. Sentimental eyewash about lovely nuns no longer cuts it in a world where the Church has succeeded so spectacularly in discrediting itself in so many ways - including the behaviour of religious sisters.